Comments (0)
Add to wishlistDelete from wishlist
Cite this document
Summary
One of the most prevalent mental disorders in children is the Attention Deficit Hyperactivity Disorder or ADHD. Such children's functioning is impaired in multiple settings like the home, school, etc. This is an ailment which if neglected will be carried over into adolescence and adulthood…
Download full paperFile format: .doc, available for editing
HIDE THIS PAPERGRAB THE BEST PAPER98.9% of users find it useful 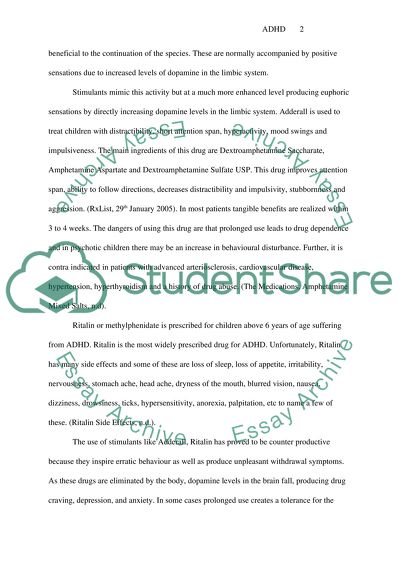 Attention Deficit Hyperactivity Disorder. One of the most prevalent mental disorders in children is the Attention Deficit Hyperactivity Disorder or ADHD. Such children's functioning is impaired in multiple settings like the home, school, etc. This is an ailment which if neglected will be carried over into adolescence and adulthood. The symptoms of this disorder are impulsiveness, hyperactivity and lack of concentration. (Attention Deficit Hyperactivity Disorder, 08/24/2005). ADHD involves two sets of symptoms: inattention and a combination of hyperactive and impulsive behaviours. "Most children are more active, distractible and impulsive than adults. And they are more inconsistent, affected by momentary events and dominated by objects in their immediate environment". However, when every function of the child is predominated by such behaviour then it is time to take cognizance. (Barkley, Russell. A, 1998). This disorder was first described by Heinrich Hoffman in 1845. A child with this affliction will either be hyperactive or will seem to be always lost in a brown study. The main causes for this disease are supposed to be neurobiological and genetic. A possible correlation between the use of alcohol and nicotine during pregnancy has been established by various studies. (Stock, Margaret, n.d).
The different drugs used in the treatment of this disease will be discussed in the sequel.
The hormone epinephrine (also known as adrenaline), is released during stressful situations producing an increased heart rate and increased blood flow to the muscles. Stimulants act similarly by increasing the levels of the neurotransmitters dopamine and norepinephrine in the brain. In addition they also act on the limbic system that reward behaviours like sexual intercourse, eating and drinking or in other words actions that are beneficial to the continuation of the species. These are normally accompanied by positive sensations due to increased levels of dopamine in the limbic system.
Stimulants mimic this activity but at a much more enhanced level producing euphoric sensations by directly increasing dopamine levels in the limbic system. Adderall is used to treat children with distractibility, short attention span, hyperactivity, mood swings and impulsiveness. The main ingredients of this drug are Dextroamphetamine Saccharate, Amphetamine Aspartate and Dextroamphetamine Sulfate USP. This drug improves attention span, ability to follow directions, decreases distractibility and impulsivity, stubbornness and aggression. (RxList, 29th January 2005). In most patients tangible benefits are realized within 3 to 4 weeks. The dangers of using this drug are that prolonged use leads to drug dependence and in psychotic children there may be an increase in behavioural disturbance. Further, it is contra indicated in patients with advanced arteriosclerosis, cardiovascular disease, hypertension, hyperthyroidism and a history of drug abuse. (The Medications, Amphetamine Mixed Salts, n.d).
Ritalin or methylphenidate is prescribed for children above 6 years of age suffering from ADHD. Ritalin is the most widely prescribed drug for ADHD. Unfortunately, Ritalin has many side effects and some of these are loss of sleep, loss of appetite, irritability, nervousness, stomach ache, head ache, dryness of the mouth, blurred vision, nausea, dizziness, drowsiness, ticks, hypersensitivity, anorexia, palpitation, etc to name a few of these. (Ritalin Side Effects, n.d.).
The use of stimulants like Adderall, Ritalin has proved to be counter productive because they inspire erratic behaviour as well as produce unpleasant withdrawal symptoms. As these drugs are eliminated by the body, dopamine levels in the brain fall, producing drug craving, depression, and anxiety. In some cases prolonged use creates a tolerance for the drug, requiring larger and larger doses to produce a comparable effect and thus in effect proving to be highly addictive.
Fortunately, the U.S. Food and Drug Administration (FDA) approved Strattera as a medication for ADHD. Strattera is atomoxetine HCL a selective norepinephrine reuptake inhibitor (RxList, 2005). Strattera is not a stimulant and unlike them, which work on dopamine; Strattera or atomoxetine works on the neurotransmitter norepinephrine. Further studies are required in order to contrast Strattera with the stimulants but the evidence already available indicates that over 70 percent of children with ADHD being treated with Strattera have exhibited significant improvement. (Attention Deficit Hyperactivity Disorder, 08/24/2005). This drug might prove to be a panacea for the victims of ADHD.
References.
Attention Deficit Hyperactivity Disorder, 24th August 2005, retrieved from
http://www.nimh.nih.gov/healthinformation/adhdmenu.cfm
Attention Deficit Hyperactivity Disorder, September 1998, Scientific American
Stock, Margaret. Barkley, A. Russell. et al, Attention Deficit Hyperactivity Disorder,
National Institute of Mental health
RxList, 29/01/2005, http://www.rxlist.com/cgi
The Medications, Amphetamine Mixed Salts, retrieved from
http://www.whatmeds.com/meds/adderall.html
Ritalin Side Effects, retrieved from http://www.add-adhd-help-
center.com/ritalin_side_effects.htm
Strattera, http://www.rxlist.com/cgi/popupdef Read More
Share:
Tags
Cite this document
(“National Institute of Health Essay Example | Topics and Well Written Essays - 500 words”, n.d.)
National Institute of Health Essay Example | Topics and Well Written Essays - 500 words. Retrieved from https://studentshare.org/miscellaneous/1505709-national-institute-of-health

CHECK THESE SAMPLES OF National Institute of Health

... of social welfare as shown by the triangle marked abc. Social welfare in health care is bound to increase as producers tend to produce more as a result of the subsidy while consumers tend to consume more because some of the benefits of the subsidy are passed on to consumers by producers (Hazlitt, 1988, p.198). Health outcomes associated with the above action of the government can be measured in conformity with a number of positive effects. For instance a series of positive outcomes including a healthier nation, greater productivity, longevity and a bigger Gross Domestic Product could add to incremental values by increasing the relative effectiveness of intervention by the government. If the free market forces of demand and supply...
8 Pages(2000 words)Case Study

Worse, because the family sometimes cannot afford to cover their medical expenses, these mentally ill patients end up with no medical care at all; they are forced to suffer the debilitating symptoms of their mental illness and to be subjected to worsening mental and general health conditions.
This paper shall discuss the lack of insurance among mentally ill patients. It shall first describe the mental health issue and the student’s position on such an issue. This paper shall also explain why this position is important and the relevance of the position to nursing practice, the mentally ill, and society. The rationale of this position shall be clearly explained and two factors that contribute to this issue shall be identi...
8 Pages(2000 words)Assignment
sponsored ads
Save Your Time for More Important Things
Let us write or edit the essay on your topic "National Institute of Health" with a personal 20% discount.
GRAB THE BEST PAPER

Let us find you another Essay on topic National Institute of Health for FREE!