Comments (0)
Add to wishlistDelete from wishlist
Cite this document
Summary
Sometimes it looks as though there is no distinction between law and morality, because a moral person/society has to be good, law-abiding and ancient Greek writers vouch for that. Looked at it minutely, there exists a sea of difference between the two, because though morality has formed the base of law, it has not remained so in modern times…
Download full paperFile format: .doc, available for editing
HIDE THIS PAPERGRAB THE BEST PAPER95.8% of users find it useful 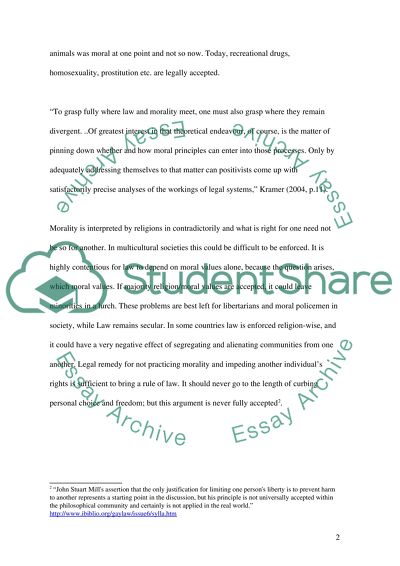 Extract of sample "Morality and Rights"

148908 Sometimes it looks as though there is no distinction between law and morality, because a moral person/society has to be good, law-abiding and ancient Greek writers vouch for that. Looked at it minutely, there exists a sea of difference between the two, because though morality has formed the base of law, it has not remained so in modern times. On the question if law should enforce morality depending entirely on moral values could be tricky and to some extent, yes, but to a large extent, no. In modern society, law cannot do moral policing, because morality changes from time to time. What was moral 2000 years ago need not be moral today1 because then individuality was powerless.

"That the only purpose for which power can be rightfully exercised over any member of a civilized community, against his will, is to prevent harm to others. His own good, either physical or moral, is not a sufficient warrant," Dworkin (1994, p.9).
Over centuries, morality had been mercurial, while Law was not, though there is a constant need to adapt to changing social requirements. Killing troublemakers and animals was moral at one point and not so now. Today, recreational drugs, homosexuality, prostitution etc. are legally accepted.
"To grasp fully where law and morality meet, one must also grasp where they remain divergent. ..Of greatest interest in that theoretical endeavour, of course, is the matter of pinning down whether and how moral principles can enter into those processes. Only by adequately addressing themselves to that matter can positivists come up with satisfactorily precise analyses of the workings of legal systems," Kramer (2004, p.11).
Morality is interpreted by religions in contradictorily and what is right for one need not be so for another. In multicultural societies this could be difficult to be enforced. It is highly contentious for law to depend on moral values alone, because the question arises, which moral values. If majority religion/moral values are accepted, it could leave minorities in a lurch. These problems are best left for libertarians and moral policemen in society, while Law remains secular. In some countries law is enforced religion-wise, and it could have a very negative effect of segregating and alienating communities from one another. Legal remedy for not practicing morality and impeding another individual's rights is sufficient to bring a rule of law. It should never go to the length of curbing personal choice and freedom; but this argument is never fully accepted2.

Also there is no evidence that a so-called 'immorality' would ruin the society, as always commonly feared3 and here, Lord Delvin's views4 were questioned. This leads to the question if law should enforce cultural choices and if it does, it will end up in a maze by killing diversity and freedom of expression and infringing natural rights. If law takes morality as its only basis, disregarding rights, popular values and discretion, it can lead to rigidity (fiat justicia, ruat caelum: let justice prevail though the heavens fall!) and can result in miscarriage of justice.
"Such incompensatable miscarriages, as we all know, have occurred, and have resulted in what is perhaps the most sombre and appalling of all acts which the executive may be obliged to perform - the bestowing of that ultimate mockery the 'posthumous pardon'," Stewart (1983, p.431).
This could be an unending debate, as Law cannot be totally divorced from morality and morality cannot exist without legal enforcement. But Law completely being based on morality alone or enforcing morality in society could be digressive.
BIBLIOGRAPHY:
1. Dwirkin, Gerald (1994), Morality, Harm and the Law, Westview Press, Oxford.
2. Kramer, Matthew H. (2004), Where Law and Morality Meet, Oxford University Press.
3. Stewart, M.A.(1984), Law, Morality and Rights, D. Reidel Publishing Company, Lancaster.
ONLINE SOURCES:
1. http://www.holisticpolitics.org/Morality/PageOne.php
2. http://www.ibiblio.org/gaylaw/issue6/sylla.htm
3. http://www.phil.tcu.edu/readings/devlin.doc
4. Read More
Share:
Tags
Cite this document
(“Morality and Rights Essay Example | Topics and Well Written Essays - 500 words”, n.d.)
Morality and Rights Essay Example | Topics and Well Written Essays - 500 words. Retrieved from https://studentshare.org/miscellaneous/1505540-morality-and-rights

CHECK THESE SAMPLES OF Morality and Rights

...Hello, I have read this and thinks it’s perfect I have slight amendments which are highlighted in red. thanks Universal Declaration of Human Rights Introduction Human rights are defined as, the basic standards by which we can identify and measure inequality and fairness. These rights are specified in the Universal Declaration of Human Rights.1 The United Nations adopted the Universal Declaration of Human Rights (UDHR) on the 10th of December 1948. It consists of a number of civil, cultural, economic, political, and social rights. Although, it is not legally binding, it provides an authoritative interpretation of several articles of the UN Charter; and the latter is binding on the member states of the United Nations.2 There are several...
8 Pages(2000 words)Case Study
sponsored ads
Save Your Time for More Important Things
Let us write or edit the essay on your topic "Morality and Rights" with a personal 20% discount.
GRAB THE BEST PAPER

Let us find you another Essay on topic Morality and Rights for FREE!