Comments (0)
Add to wishlistDelete from wishlist
Cite this document
Summary
Mr. Ross, 65, is a recently retired bureaucrat from US International Development Agency based in Houston. He is catholic, and educated at PhD level in sociology. Today, he is with us, to share his experiences with the family as a social institution.
Mr. Ross .I have no family at the moment .My second wife Tania, divorced me about a decade ago…
Download full paperFile format: .doc, available for editing
HIDE THIS PAPERGRAB THE BEST PAPER93.8% of users find it useful 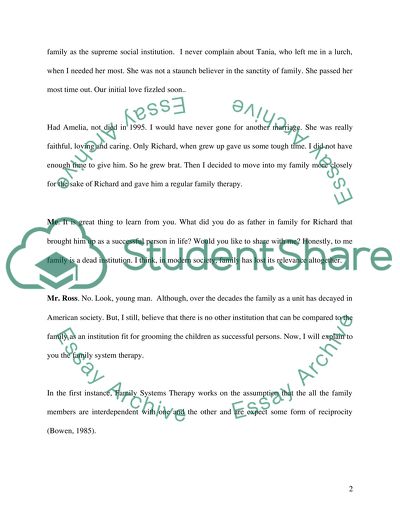 Extract of sample "Interview with a 30 Years Older Person"

Download file to see previous pages Just, pray for me. Please.
Mr. Ross. Young man, I still believe, you are right in narrating the utility of family. Although back in 1930, a Harper's Monthly Magazine essayist wrote: "To-day social and civic agencies, in taking over most of these parental responsibilities, have deprived the parents of an important bond of mutual understanding. But, I still believe in the sanctity, integrity and sovereignty of family as the supreme social institution. I never complain about Tania, who left me in a lurch, when I needed her most. She was not a staunch believer in the sanctity of family. She passed her most time out. Our initial love fizzled soon..
Had Amelia, not died in 1995. I would have never gone for another marriage. She was really faithful, loving and caring. Only Richard, when grew up gave us some tough time. I did not have enough time to give him. So he grew brat. Then I decided to move into my family more closely for the sake of Richard and gave him a regular family therapy.
Me. It is great thing to learn from you. ...
I think, in modern society, family has lost its relevance altogether.
Mr. Ross. No. Look, young man. Although, over the decades the family as a unit has decayed in American society. But, I still, believe that there is no other institution that can be compared to the family as an institution fit for grooming the children as successful persons. Now, I will explain to you the family system therapy.
In the first instance, Family Systems Therapy works on the assumption that the all the family members are interdependent with one and the other and are expect some form of reciprocity (Bowen, 1985).
Family Systems Therapy has a broad spectrum of application which can be used to treat children in the families and intimate couples that might have one of the following: various personal and family crises; sociological disorders; and physically challenged or have a chronic illness.
Since Richard used to think aggrieved by my over occupation with work he was always sad and angry. In the age of 16, he left home and I received complaints from local police station that Richard has been caught gambling and in some other illegal, unhealthy activities in the local pubs. This worried me a lot. I immediately decided to go for family therapy for Richard. This type of therapy focuses on the aggrieved child helping him through the grief, sadness, depression, anger, and other emotions. It differs from person to person on how they can cope up with this kind of situation. Some individuals' even stops talking as a coping mechanism during this period. For some, it goes on and on until they realize that they cannot speak as they think that they have lost a part of them completely.
You see. Most of the children entirely blame themselves for their parents' problems and ...Download file to see next pagesRead More
Share:
Tags
Cite this document
(“Interview with a 30 Years Older Person Essay Example | Topics and Well Written Essays - 1000 words”, n.d.)
Interview with a 30 Years Older Person Essay Example | Topics and Well Written Essays - 1000 words. Retrieved from https://studentshare.org/miscellaneous/1505300-interview-with-a-30-years-older-person

CHECK THESE SAMPLES OF Interview with a 30 Years Older Person

Interview a person who works with older adults

... March 9, Interview Summary: A Person Who Works with Older Adults One had the opportunity to interview aperson who works as a caregiver for older adults. She requested to keep personal identification in private and confidential nature. As such, she is hereby referred to as Ms. LRC. The current discourse hereby summarizes the results of the interview which touches on areas such as: educational training, the description of their duties, as well as the pros and cons of working in that career from her perspective. Likewise, her perceptions on the major changes in this field of endeavor since she entered the profession would also be disclosed. Finally, the type of training needed to enter in this particular profession today would also...
2 Pages(500 words)Essay

According to the World Health Organization, stroke is a condition that occurs due to the interruption of the supply of blood to the brain. It usually occurs as a result of blood vessels bursting or blocking by a clot. It can be termed as a cerebral vascular disorder as it affects the brain and the blood vessels. Its effects result in the death of the area in the brain tissue (WHO, 2008).
Stroke is one of the leading deaths in developed countries. In Australia, stroke is the most second cause of death. Nearly sixty thousand strokes occur every year. As metabolic and cardiovascular diseases incidence increase with age, older people are likely to experience strokes. Age forms, the most&...
6 Pages(1500 words)Assignment
sponsored ads
Save Your Time for More Important Things
Let us write or edit the essay on your topic "Interview with a 30 Years Older Person" with a personal 20% discount.
GRAB THE BEST PAPER

Let us find you another Essay on topic Interview with a 30 Years Older Person for FREE!