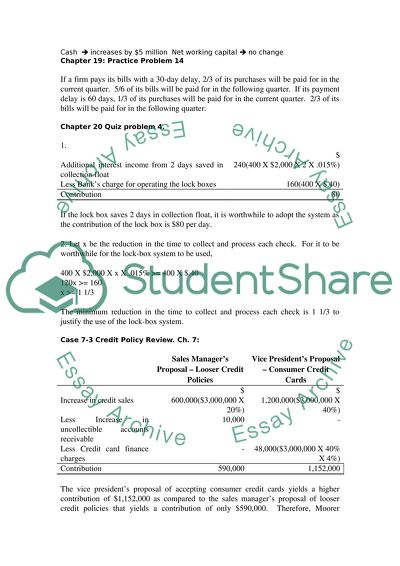 Extract of sample "Assessing How Well Companies Manage Their"

The vice president's proposal of accepting consumer credit cards yields a higher contribution of $1,152,000 as compared to the sales manager's proposal of looser credit policies that yields a contribution of only $590,000. Therefore, Moorer Corporation would be better off under the vice president's proposal. Credit sales should not be abolished. Though credit sales would result in uncollectible accounts receivable, abolishing credit sales altogether would result in lost sales that might be more than the uncollectible accounts receivable. This is because it is common practice nowadays, especially in the sale of luxury consumer goods.
Problem 21-5 JIT Inventory
1. John Burton should develop a JIT inventory system. A JIT inventory system reduces in-process inventory and its associated cost (Just in time, n.d.). JIT manufacturing means making a good or service only when the customer, internal or external, requires it (Atkinson et al., 1996). The process is driven by a series of signals, or Kanban, that tell production processes to make the next part. Kanban are usually simple visual signals, such as the presence or absence of a part on a shelf. New stock is ordered when stock reaches the re-order level. This saves warehouse space and costs (Just in time, n.d.). Besides, if neither of Penman's two competitors uses a JIT inventory system, the use of one by Penman will give it a competitive advantage. Lastly, most of Penman's employees are trained to do only one job. This is critical to JIT success (Spencer and Guide, 1995). The union should be assured that the implementation will not result in job loss and made to see the benefits of a JIT inventory system, such as job satisfaction and flexibility. Job satisfaction results when supplies continue around the clock keeping workers productive. Flexibility results when employees are utilized in periods of high demand and do not need to work in period of low demand (Just in time, n.d.).
2. The four possible performance measure that John could use to evaluate the effectiveness of the system are defect rates, cycle times, percentage of time that deliveries are on time, and order accuracy (Atkinson et al., 1996). Defect rate is the fallout rate, parts per million (ppm), of all components in manufacturing and assembly that fail quality tests at any point in the production process (Glossary of manufacturing terms, n.d.). Cycle time is the length of time from the start of production and assembly operations for a particular finished product to the completion of all manufacturing, assembly, and testing for that product or specific customer order (Glossary of manufacturing terms, n.d.). The percentage of time that deliveries are on time is the percentage of time that products ordered by customers are received by the specified time or date (Glossary of manufacturing terms, n.d.). Order accuracy means that the goods delivered confirm to order specifications, such as quantity, color, and grade.
REFERENCES
Atkinson, A., Banker, R., Kaplan, R., & Young, M.S. (1996). Management accounting. New Jersey: Prentice Hall.
Glossary of manufacturing terms. (n.d.). Retrieved October 21, 2006, from http://mediakit.industryweek.com/about_glossary.htm
Just in time. (n.d.). Retrieved October 21, 2006, from http://en.wikipedia.org/wiki/Just_In_Time
Spencer, M.S., & Guide, V.D. (1995). An exploration of the components of JIT: case study and survey results. International Journal of Operations & Production Management, 15(5), 72-83. Read More
Share:
Tags
Cite this document
(“Assessing How Well Companies Manage Their Essay Example | Topics and Well Written Essays - 500 words”, n.d.)
Assessing How Well Companies Manage Their Essay Example | Topics and Well Written Essays - 500 words. Retrieved from https://studentshare.org/miscellaneous/1505232-assessing-how-well-companies-manage-their

CHECK THESE SAMPLES OF Assessing How Well Companies Manage Their

As a major consumer product, this study will discuss the importance of having a price regulation within the pharmaceutical industry. Several factors that could affect the competition in the branded pharmaceutical market will be elaborate to give us a good insight with regards to the pricing of medicines. In line with the importance of having imposed a price regulated on medicines, the author will discuss the negative effects of not regulating the generic medicines as well as...

However, the purpose of our government is not subjective, and it is not unwritten or buried somewhere in the philosophical musings of a Greek theorist. The purpose of government, specifically our government, as stated by Thomas Jefferson in the Declaration of Independence, is “to secure these [natural] Rights, Governments are instituted among Men, deriving their just powers from the consent of the governed…” Our government exists to protect individual, negative rights that exist outside the common law. Whenever a force, whether in a society or from outside it, threatens the rights of citizens, it is the responsibility of their government to take action and protect them from violations. There are many forces that...
9 Pages(2250 words)Assignment

... suggests that with the existence of early movers in e-commerce it is not true that late movers cannot achieve competitive advantage. He implies that with greater investment and effort late movers can push early movers to rethink of their business strategies and even force them to exit the market. Furthermore, being a late mover in e-commerce does not surely mean that such companies cannot opt to provide “a particular service, a combination of services, or other unique value propositions” (p.8). The role of the senior management in allowing higher investment and their willingness to try new ideas on the basis of the assessment of the existing market is very much needed for late movers to succeed. However, it is clear from corporate evidence...
12 Pages(3000 words)Research Proposal
sponsored ads
Save Your Time for More Important Things
Let us write or edit the essay on your topic "Assessing How Well Companies Manage Their" with a personal 20% discount.
GRAB THE BEST PAPER

Let us find you another Essay on topic Assessing How Well Companies Manage Their for FREE!