Comments (0)
Add to wishlistDelete from wishlist
Cite this document
Summary
One of the many things in a person's life that may be taken and considered as part of what makes him a person, of who he is and where he is going, is being a member of a particular society. This truism of "already being a part of society" more or less makes human beings accept the inception of society as something given…
Download full paperFile format: .doc, available for editing
HIDE THIS PAPERGRAB THE BEST PAPER93.5% of users find it useful 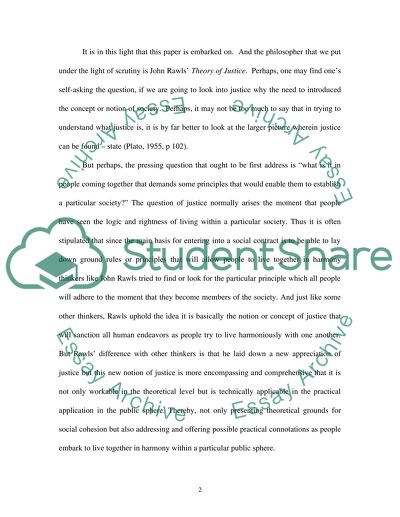 Extract of sample "Theory of Justice"

Download file to see previous pages In the ancient period, we have both Plato and Aristotle giving their attention to society not in isolation but always in relation with the question of morality. And this tradition of looking at the interweaving question of morality with queries regarding morality has been the practiced. Thus, great thinkers from then on have injected the question of justice as both political and moral question. Variegated answers have been raised in order to account for it. Some may be correct, others may still be closer to truth (if there is one) or perhaps if one is stationed a an events that denies comprehension and understanding of which then one may come up with nihilistic appropriations. But, nevertheless, what is important is the idea that the coming together of human beings to form a society need be understood before we can come up with a viable solution and hopefully that this answer will be our guide as we address the question "what is justice"
It is in this light that this paper is embarked on. And the philosopher that we put under the light of scrutiny is John Rawls' Theory of Justice. Perhaps, one may find one's self-asking the question, if we are going to look into justice why the need to introduced the concept or notion of society. Perhaps, it may not be too much to say that in trying to understand what justice is, it is by far better to look at the larger picture wherein justice can be found - state (Plato, 1955, p 102).
But perhaps, the pressing question that ought to be first address is "what is it in people coming together that demands some principles that would enable them to establish a particular society" The question of justice normally arises the moment that people have seen the logic and rightness of living within a particular society. Thus it is often stipulated that since the main basis for entering into a social contract is to be able to lay down ground rules or principles that will allow people to live together in harmony thinkers like John Rawls tried to find or look for the particular principle which all people will adhere to the moment that they become members of the society. And just like some other thinkers, Rawls uphold the idea it is basically the notion or concept of justice that will sanction all human endeavors as people try to live harmoniously with one another. But Rawls' difference with other thinkers is that he laid down a new appreciation of justice but this new notion of justice is more encompassing and comprehensive that it is not only workable in the theoretical level but is technically applicable in the practical application in the public sphere. Thereby, not only presenting theoretical grounds for social cohesion but also addressing and offering possible practical connotations as people embark to live together in harmony within a particular public sphere.
John Rawls' theory on justice is grounded on the assumption that intrinsic in human nature is the attribute of rationality. This ideation of how human beings are perceived is basically not something new. Since, the notion that human beings are rational animals has long been accepted as part of one of that common knowledge pertinent in understanding humanity. Supposing that indeed it is rationality that enables human beings to be humans then it is but apt that we try to understand rationality. For, the very ...Download file to see next pagesRead More
Share:
Tags
Cite this document
(“Theory of Justice Essay Example | Topics and Well Written Essays - 3250 words”, n.d.)
Theory of Justice Essay Example | Topics and Well Written Essays - 3250 words. Retrieved from https://studentshare.org/miscellaneous/1505034-theory-of-justice

CHECK THESE SAMPLES OF Theory of Justice

...as an important principle of an organized society. Notably, many philosophers have handled different justice theories were common. The answers to questions pertaining justice starts from the unsophisticated to the complicated elucidation. Therefore, it is paramount that the analysts ask why Plato disregarded some justice concepts3. Cephalus, a diplomat of traditional integrity of the early trading category, founded the traditional theory of justice. In his view, justice entails honesty and reassures payments of debts to the people one owes. This is the reason Cephalus equates justice with the right...
5 Pages(1250 words)Essay

...of justice Rawls attempts to resolve the utilitarian and deontological approach to ethics by arguing with the Kantian social contract model. However, Rawls recognized that the justice as fairness is based in the Kant's notion of autonomy. Rawls goes further and explain theory of justice as the original position principle where the justice based in the veiled ignorance, according to Rawls "no one knows his place in society his class position or social status" (Rawls, 1999 (ed), p.118). In the theory of justice Rawls support the element of the Kantian social contract philosophy, Rawls does agree with Kant's ideal of...
3 Pages(750 words)Essay

... enough to the needs of young children. This could be the cause of plenty of frustration and also impact upon their actual work performance because those rules and regulations tend to limit them. Yet another demotivating factor is the “glass ceiling” that these individuals come up against, especially if they are women (Osgood and Halsall, 2007). Applying Henri Fayol’s classical theory of management, some of the principles which would apply in the context of motivating employees in the early childhood education field would include (a) equity (b) initiative and (c) esprit de corps (Fayol, 1949). The first means that a combination of kindliness and justice must be shown to the employees (b) they must be encouraged to demonstrate initiative...
6 Pages(1500 words)Coursework
sponsored ads
Save Your Time for More Important Things
Let us write or edit the essay on your topic "Theory of Justice" with a personal 20% discount.
GRAB THE BEST PAPER

Let us find you another Essay on topic Theory of Justice for FREE!