Comments (0)
Add to wishlistDelete from wishlist
Cite this document
Summary
Right and wrong; joy and despair; good and evil; these are the themes which are addressed in the work of, 'The Strange Case of Dr. Jekyll and Mr. Hyde'. Dr. Jekyll and Mr. Hyde is a novella which was written about a London lawyer who investigates some strange occurrences between his old friend, Dr…
Download full paperFile format: .doc, available for editing
HIDE THIS PAPERGRAB THE BEST PAPER93.2% of users find it useful 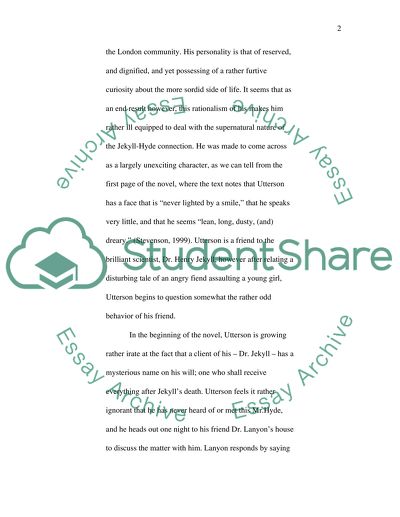 Extract of sample "Jekyll and Hyde: A Critical Review"

Download file to see previous pages Throughout the novel, the character of Mr. Hyde has a strange and powerful effect on all who encounter him. The aim of this paper is to discuss this, and to compare the reaction of two characters in particular - Utterson and Dr. Lanyon - and how they react to Hyde. This is what will be dissertated in the following.
In this story, Mr. Gabriel John Utterson is a prominent and upstanding lawyer, who is well respected in the London community. His personality is that of reserved, and dignified, and yet possessing of a rather furtive curiosity about the more sordid side of life. It seems that as an end result however, this rationalism of his makes him rather ill equipped to deal with the supernatural nature of the Jekyll-Hyde connection. He was made to come across as a largely unexciting character, as we can tell from the first page of the novel, where the text notes that Utterson has a face that is "never lighted by a smile," that he speaks very little, and that he seems "lean, long, dusty, (and) dreary." (Stevenson, 1999). Utterson is a friend to the brilliant scientist, Dr. Henry Jekyll, however after relating a disturbing tale of an angry fiend assaulting a young girl, Utterson begins to question somewhat the rather odd behavior of his friend.
In the beginning of the novel, Utterson is growing rather irate...
Lanyon's house to discuss the matter with him. Lanyon responds by saying that he has "Never heard of him. Since my time." (Chapter 2). Utterson remains lingering around the town, in dire hopes of finding Mr. Hyde. At last he is rewarded, after ten o'clock, "when the shops were closedandthe by-street was very solitary and, in spite of the low growl of London from all round, very silent." (Chapter 2). When Utterson first approaches Mr. Hyde, he is answered by Hyde shrinking back with a "hissing intake of the breath". Utterson tries to be friendly, and makes several attempts at continuing the conversation although Mr. Hyde appears to be stiff and rude. After Utterson tells Hyde that they have "common friends" in Dr. Jekyll, Hyde responds: "He never told you," cried Mr. Hyde, with a flush of anger. "I did not think you would have lied." (Chapter 2). After this Hyde: "snarled aloud into a savage laugh; and the next moment, with extraordinary quickness, he had unlocked the door and disappeared into the house."
Utterson's overall first reaction to Hyde was one of frustration and confusion. He did not understand why Hyde was so angry, rude, and inconsistent. The unexpectedness of him suddenly disappearing into the house was another issue of question; Utterson really did not know quite what to think of Mr. Hyde after their first meeting. Utterson considered Hyde to be "pale and dwarfish, he gave an impression of deformity without any nameable malformation, he had a displeasing smile, he had borne himself to the lawyer with a sort of murderous mixture of timidity and boldness, and he spoke with a husky, whispering and somewhat broken voice" (Chapter 2).
Dr. Hastie Lanyon is a reputable London doctor who is extremely close friends with Utterson. He is ...Download file to see next pagesRead More
Share:
Tags
Cite this document
(“Jekyll and Hyde: A Critical Review Essay Example | Topics and Well Written Essays - 1000 words”, n.d.)
Jekyll and Hyde: A Critical Review Essay Example | Topics and Well Written Essays - 1000 words. Retrieved from https://studentshare.org/miscellaneous/1504969-jekyll-and-hyde-a-critical-review

CHECK THESE SAMPLES OF Jekyll and Hyde: A Critical Review

In fact, they have to learn the prevailing forces in their industry, allowing them to analyze the best move as possible that they could take in order to survive in a tough competition. These are some of the best moves that they need to put into the account in order to compete and create novel acts to create something new, be innovative to think of possibilities and ensure their market growth. This is clearly evident in the case of Wal-Mart, a company that is known as the scale brand. Prior to obtaining this brand success for this firm, there are specific moves that it clearly employed. This is the most interesting point that the work at hand emphasizes in great detail. There are relevant theories that could support this claim and...
8 Pages(2000 words)Case Study

Considering the goals and objectives of the organization, the various factors that have influenced the aspect of voting in favor of the emerging markets have been determined in this research paper. The critical evaluation of FIFA’s decision in awarding the emerging markets with the hosting rights of the Football Cup has been done by determination of the extent to which the goals and objectives of the governing body have been fulfilled with this decision (Baade and Matheson, 2004, p.353). The research problem also established the fairness of the World Cup Bidding Process and the basis of the FIFA Executive Committee’s decision in awarding the Football World Cup hosting to the developing countries. In order to analyze th...
29 Pages(7250 words)Dissertation
sponsored ads
Save Your Time for More Important Things
Let us write or edit the essay on your topic "Jekyll and Hyde: A Critical Review" with a personal 20% discount.
GRAB THE BEST PAPER

Let us find you another Essay on topic Jekyll and Hyde: A Critical Review for FREE!