Comments (0)
Add to wishlistDelete from wishlist
Cite this document
Summary
Kuwait women, once within the four walls of the house are now coming out of their family to serve the society and to find a place in the landmarks of their country's history. The local custom made them sit at home and look after home-based businesses for many years…
Download full paperFile format: .doc, available for editing
HIDE THIS PAPERGRAB THE BEST PAPER97.8% of users find it useful 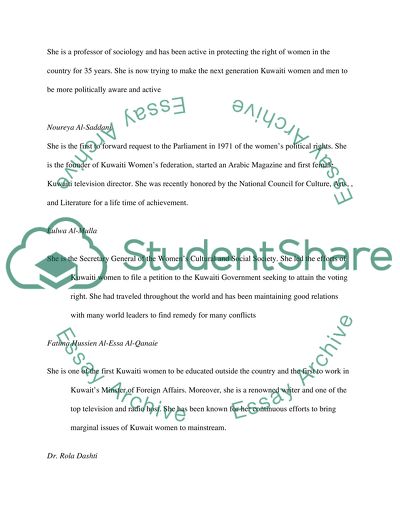 Download file to see previous pages But, gradually, the authorities have noticed that the country with abundant human resources is facing workers' shortage in many strategic positions in the country. The government has invested a sizeable amount of money solely for the education of women in Kuwait. These initiatives had paved the way for the commencement of many developmental activities targeted towards women in the country. In the past there were stories about Kuwait women which had become hot news in the country's media. The same media is now reporting that Kuwait women are revolutionizing the role of women in the country's growth and prosperity.
The recent years have proved that Kuwait has also some women leaders like that of other countries. In 2006, Vital Voices Global Partnership recognized seven Kuwaiti women at the Annual Leadership Awards as honor for their historic achievement. Their profile is briefed below:
She is a professor of sociology and has been active in protecting the right of women in the country for 35 years. She is now trying to make the next generation Kuwaiti women and men to be more politically aware and active
She is the first to forward request to the Parliament in 1971 of the women's political rights. She is the founder of Kuwaiti Women's federation, started an Arabic Magazine and first female Kuwaiti television director. She was recently honored by the National Council for Culture, Arts, , and Literature for a life time of achievement.
Lulwa Al-Mulla
She is the Secretary General of the Women's Cultural and Social Society. She led the efforts of Kuwaiti women to file a petition to the Kuwaiti Government seeking to attain the voting right. She had traveled throughout the world and has been maintaining good relations with many world leaders to find remedy for many conflicts
Fatima Hussien Al-Essa Al-Qanaie
She is one of the first Kuwaiti women to be educated outside the country and the first to work in Kuwait's Minster of Foreign Affairs. Moreover, she is a renowned writer and one of the top television and radio host. She has been known for her continuous efforts to bring marginal issues of Kuwait women to mainstream.
Dr. Rola Dashti
She is a women activist in Kuwait, fighting for gender equality and increased role of women in public life. She has been recently been listed as one of the fifty most powerful Arabs. She was the first women to declare her candidacy for the 2007 election in Kuwait.
Ghada Al-Khalaf
She is an MBA graduate from an International University, representing the future generation of Kuwait. She founded the Youth and Graduate Committee of Kuwait, an origination that works for augmenting the political awareness among the youth.
Lulwa Abdelwhab Eassa Al-Qettami
She is known as the mother of Women's Movement in Kuwait. She has served as the first Dean of a Women's College. She is famous for the controversial liberalization of women from wearing abaya in 1963. She was selected for her endless effort for Social Work and Volunteerism in the Arab world as the Arab Woman for the year 1987.
Work Cited
Fattah M. Hassan. 2006. First Time Out, Kuwaiti Women Become a Political Force. 23 November, 2008. Women Leaders of Kuwait. (n.d.).Vital Voices Global Partnership. 23 November, 2008
http://www.vitalvoices.org/desktopdefault.aspxpage_id=724 ...Download file to see next pagesRead More
Share:
Tags
Cite this document
(“Kuwait Women Essay Example | Topics and Well Written Essays - 750 words”, n.d.)
Kuwait Women Essay Example | Topics and Well Written Essays - 750 words. Retrieved from https://studentshare.org/miscellaneous/1504733-kuwait-women

CHECK THESE SAMPLES OF Kuwait Women

The circumstances under which women proceed to criminal actions have been extensively studied in the literature. Towards this direction, the study of Radosh (2002) revealed that ‘the common life experience of prior physical or sexual abuse is among the most consistent recurring themes among incarcerated women; for these wome...

In the story, one symbolism used to represent the sensitivity and weakness of women is the chrysanthemums themselves. The chrysanthemums are described as having stems that are too small and easy for Elisa’s energy, and this is basically the same as her character. As a weak and sensitive woman, she easily becomes prey to the kindness displayed by the stranger. Just like the chrysanthemums that need to be constantly transplanted and regularly cut, women like Elisa easily believe what men tell them although this is not necessarily true. Moreover, the chrysanthemums are somehow ridiculed by Harvey when he tells Elisa, “Some of those yellow chrysanthemums you had this year were ten inches across…I wish you’d wo...
7 Pages(1750 words)Literature review
sponsored ads
Save Your Time for More Important Things
Let us write or edit the essay on your topic "Kuwait Women" with a personal 20% discount.
GRAB THE BEST PAPER

Let us find you another Essay on topic Kuwait Women for FREE!