Comments (0)
Add to wishlistDelete from wishlist
Cite this document
Summary
The author Peter Saunders discusses the concern about how the child care should be address by the government. He identify that the main motive behind mothers going for work is their financial needs. With family to support single man's earning cant fully satisfy all money matters like housing rent, bills and other necessities…
Download full paperFile format: .doc, available for editing
HIDE THIS PAPERGRAB THE BEST PAPER96.8% of users find it useful 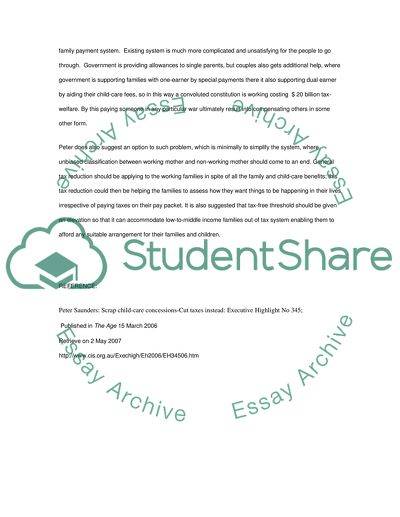 Child care should cut mothers tax Scrap child-care concessions - cut taxes instead The Peter Saunders discusses the concern about how the child care should be address by the government. He identify that the main motive behind mothers going for work is their financial needs. With family to support single man's earning cant fully satisfy all money matters like housing rent, bills and other necessities. So mothers' takes a step forward and go out to support their family but this does cost them in the form of the childcare remittance which unreasonably takes large share from their earning and hence much of the effort goes in vain. So the government is force to take any steps to ease such burden from low-to-middle income families hence Government took steps to help its citizen as the problem escalated in 2000, when the Common Wealth Government initiated to provide subsidy of child care fess which was up to $144 a week for low-income families and even in this system families earning million dollars a year can also be eligible of this allowance.
But it is also mentioned by peter that taking such steps actually cause the rise in child care fees, which was according to the statistics provided by peter was 49 % more rapidly than inflation from 2000 to 2004. So the government during the election of 2004 proclaims an aid such that families can make reduction in their income tax equivalent to the 30 % of what they spent on their child care. Then all the related organizations, companies and societies came up with their own suggestions and improvement ideas, made to the government in order to improve child care facilities. Some suggestion were to make child care fees to be employee's pre-tax sacrifice, where as liberal 's want income tax reduction to be amplify to 50%, ACTU suggesting for spending $10 billion to construct new child-care centers and last but not the least Australia council of social service also demanded immense increase in child-care benefits.
Peter also give reference of Families Ministers Mal Brough which identify the problem to such arousing demands that as the Government aims to satisfy one sector of public while the others sectors gets affected in such a way even government don't desire, and the cycle goes on between government and disgruntled public sector. All such acts of government, lead to patchy child care system which is only a small fraction of family payment system. Existing system is much more complicated and unsatisfying for the people to go through. Government is providing allowances to single parents, but couples also gets additional help, where government is supporting families with one-earner by special payments there it also supporting dual earner by aiding their child-care fees, so in this way a convoluted constitution is working costing $ 20 billion tax-welfare. By this paying someone in any particular war ultimately result into compensating others in some other form.
Peter does also suggest an option to such problem, which is minimally to simplify the system, where unbiased classification between working mother and non-working mother should come to an end. General tax reduction should be applying to the working families in spite of all the family and child-care benefits; this tax reduction could then be helping the families to assess how they want things to be happening in their lives irrespective of paying taxes on their pay packet. It is also suggested that tax-free threshold should be given an elevation so that it can accommodate low-to-middle income families out of tax system enabling them to afford any suitable arrangement for their families and children.

CHECK THESE SAMPLES OF Child care should cut mothers tax

... there is no need for managers to please customers by being more favorable to them in decision making. However, acting in their own interest hospital managers would more likely suppress information flow to shareholders and take riskier decisions bordering on strategic competitive response to rivalry. For example price cutting decisions to increase volumes might jeopardize cash flow thus increasing operating costs in the short run. Coupled with inadequate knowledge about demand elasticities – price, income and cross – the managers might more likely make the wrong decisions. Information available to customers is still less in the health care industry (McGuire, Henderson and Mooney, 1987, p. 121). For instance they might not know...
8 Pages(2000 words)Case Study

6 Pages(1500 words)Assignment
sponsored ads
Save Your Time for More Important Things
Let us write or edit the essay on your topic "Child care should cut mothers tax" with a personal 20% discount.
GRAB THE BEST PAPER

Let us find you another Essay on topic Child care should cut mothers tax for FREE!