Comments (0)
Add to wishlistDelete from wishlist
Cite this document
Summary
There must be a clear reason behind the need for the test. That is, it must serve a definite purpose. The test must fulfill a specific task or purpose. For example, in case of a student the test must make it possible for him/her to move to a higher class depending on the results.
…
Download full paperFile format: .doc, available for editing
HIDE THIS PAPERGRAB THE BEST PAPER96% of users find it useful 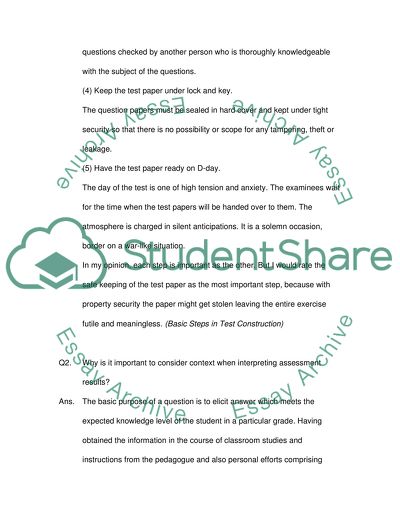 Download file to see previous pages It is also a good idea to have the questions checked by another person who is thoroughly knowledgeable with the subject of the questions.
The day of the test is one of high tension and anxiety. The examinees wait for the time when the test papers will be handed over to them. The atmosphere is charged in silent anticipations. It is a solemn occasion, border on a war-like situation.
In my opinion, each step is important as the other. But I would rate the safe keeping of the test paper as the most important step, because with property security the paper might get stolen leaving the entire exercise futile and meaningless. (Basic Steps in Test Construction)
Ans. The basic purpose of a question is to elicit answer which meets the expected knowledge level of the student in a particular grade. Having obtained the information in the course of classroom studies and instructions from the pedagogue and also personal efforts comprising homework and revision, the student is expected to grasp and retain the level of knowledge to respond to a certain question.
The context plays an important role when interpreting assessment results because it helps the assessor link the question with the correct information necessary for the answer. The context covers all the important aspects of the question such as what, why, where, how, when, and the source, as relevant to the question in particular as applicable to the whole class. Without the context, the question becomes generalized leaving the scope for answer also general and without relevance for the particular class or group. (British Columbia)
Q3. Why is it important to pilot test items
Ans. Pilot test is done to design the entire curriculum consisting of the information lessons in the text book, together with questions, and the vocabulary level suitable for the students' age group and intelligence.
A pilot test is a long drawn-out affair involving time and evaluation by a competent teacher/researcher. The evaluation is carried out by the teacher/researcher after a period of his/her training. The training is rigorous and necessary to brief the teacher about the subject content.
Once the training is complete, the teacher begins to conduct a model class with the help of the subject curriculum. The feedbacks received from the students' reactions as a result of the daily instructions by the teacher are noted down by the teacher and preserved for further analysis by another independent evaluator.
Even after the evaluation is through, the pilot test is not complete until the principal gives his approval in writing. (CUES - Pilot ...Download file to see next pagesRead More
Share:
Tags
Cite this document
(“Discussion Question 3 Essay Example | Topics and Well Written Essays - 1000 words”, n.d.)
Discussion Question 3 Essay Example | Topics and Well Written Essays - 1000 words. Retrieved from https://studentshare.org/miscellaneous/1504310-discussion-question-3

CHECK THESE SAMPLES OF Discussion Question 3

.... Edward Hall, on the other hand, looked more to the ideas of proxemic space, noticing that cultures often varied not only by the amount of space they felt comfortable in on a personal level, but also how people interact differently on a social and public level.3 This translates into the work of Hofstede and Trompenaars by illuminating how different cultures define their space by either individual or group mentalities. For instance, in societies with a high degree of emphasis on the individual, personal space is calculated at a much greater distance than in societies in which space is viewed more collectively. However, this space can also be further broken down into who is allowed to enter the intimate area, social area or public area...
14 Pages(3500 words)Case Study

In a similar manner, the laws of the republic are also important for August's since he avenged the murder of his adopted father through legal means and tribunals established by law. The Res Gestae mentions that Augustus was offered the dictatorship by both the senate and the people but he refused it. He was also offered the consulship of Rome for life yet he refused when the document was written he had been consul thirteen times and had held tribunician power for thirty-seven continuous years. In fact, Augustus was offered the position of being the supervisor of laws and morals without having a colleague to check his power which would have given him supreme authority. However, he did not want to hold any office which would be in t...
12 Pages(3000 words)Assignment

...Research Paper on Omega-3 Fatty Acid Introduction: First of all, omega3 is type of fat that is very important for human’s body. So the scientific name of omeg3 is omeg3 fatty acids or n-3 fatty acids or fish oil. It is an essential nutrients for health and most of health experts stress that it is necessary for human. In addition, our bodies need of this kinds of omega 3 fatty acids. Omega-3 has one importance of acids called alpha –linoleic acid or ALA that it is vitamins and it could not produce by our bodies but we can have this acid by omega-3. Experts proved that the omega-3 fatty acids have a beneficial effect in our health (Calviello and Serini, 2010). According to “Understanding the power of omega-3 (OP-ed)” by Tallmadge (2013...
12 Pages(3000 words)Research Paper
sponsored ads
Save Your Time for More Important Things
Let us write or edit the essay on your topic "Discussion Question 3" with a personal 20% discount.
GRAB THE BEST PAPER

Let us find you another Essay on topic Discussion Question 3 for FREE!