Comments (0)
Add to wishlistDelete from wishlist
Cite this document
Summary
Is Canada a world leader in environmental governance How does Canada's environmental policy and practices translate into real performance What do the indicators say Will the regulations and strategies as articulated in 'Turning the Corner Plan', really turnaround Canada's environmental sustenance And, going by the track record, is Canada indeed contributing to solving environmental challenges in the world; or, is it exacerbating them What is the environmental Truth-Print of Canada
…
Download full paperFile format: .doc, available for editing
HIDE THIS PAPERGRAB THE BEST PAPER97% of users find it useful 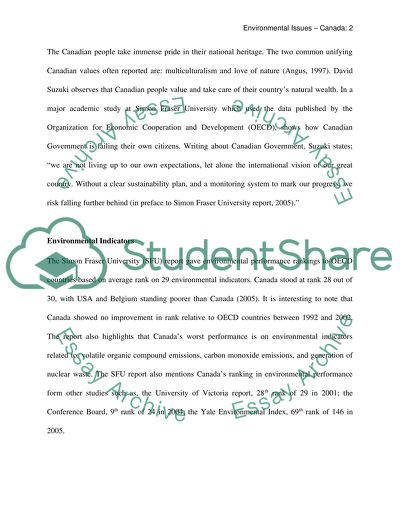 Download file to see previous pages Enveloped with a coastline of 202,080 kilometers, extensive wilderness areas, plentiful of minerals, energy, farmland, Canada is a trillion-dollar class affluent society (The World Factbook - Canada, 2009).
The Canadian people take immense pride in their national heritage. The two common unifying Canadian values often reported are: multiculturalism and love of nature (Angus, 1997). David Suzuki observes that Canadian people value and take care of their country's natural wealth. In a major academic study at Simon Fraser University which used the data published by the Organization for Economic Cooperation and Development (OECD), shows how Canadian Government is failing their own citizens. Writing about Canadian Government, Suzuki states; "we are not living up to our own expectations, let alone the international vision of our great country. Without a clear sustainability plan, and a monitoring system to mark our progress, we risk falling further behind (in preface to Simon Fraser University report, 2005)."
The Simon Fraser University (SFU) report gave environmental performance rankings to OECD countries based on average rank on 29 environmental indicators. Canada stood at rank 28 out of 30, with USA and Belgium standing poorer than Canada (2005). It is interesting to note that Canada showed no improvement in rank relative to OECD countries between 1992 and 2002. The report also highlights that Canada's worst performance is on environmental indicators related to: volatile organic compound emissions, carbon monoxide emissions, and generation of nuclear waste. The SFU report also mentions Canada's ranking in environmental performance form other studies such as, the University of Victoria report, 28th rank of 29 in 2001; the Conference Board, 9th rank of 24 in 2004; the Yale Environmental Index, 69th rank of 146 in 2005.
Of course the OECD report referenced in SFU study has some glaring methodical failings. For example:
Canada ranked 27th in forestry based on its annual per capita harvest of trees, whereas Iceland, which has virtually no trees, ranked first. If the rankings had been based on harvest per hectare of forested area, Canada would have ranked 6th rather than 27th.
In pesticide use, Canada ranked 22nd based on its annual per capita consumption, but on a per hectare basis Canada would have ranked fourth.
The point of contention is that whilst indicators have a guidance value, in themselves, they may not paint the 'perfect truth value.' As a matter of fact, there are different versions of truth. As Boyd points out, the World Economic Forum's Environmental Sustainability Index, aimed at measuring the long term environmental prospects ranks Canada fourth out of 142 nations (2003). In other words, the versions of truth vary depending upon assumptions made and perspectives of survey.
The Canadian Government and industry, for instance, have another story to tell. They claim that Canada has adequate policies and practices in place that has improved Canada's track record as the environment conscience keeper. In particular, recent surveys ...Download file to see next pagesRead More
Share:
Tags
Cite this document
(“Environmental Issues of Canada Essay Example | Topics and Well Written Essays - 1500 words”, n.d.)
Retrieved from https://studentshare.org/miscellaneous/1504243-environmental-issues-of-canada

CHECK THESE SAMPLES OF Environmental Issues of Canada

The use of the narrator in the novel helps illustrate sensual, erotic, and heartbreaking moments. To achieve its goal of exploring the acknowledged subject of love, betrayal, beauty, and desire, the author approaches the issues with an overwhelming zeal. Hence, the aim of the study is to evaluate the various techniques used in the two narratives in communicating their notions of the various subjects within the novels.
Acker uses language from other writers; as well, the plot in her fiction employs appropriation, which in return propels appropriation to the extreme since a huge part of her writing integrates texts of fiction from past writers. Blood and Guts in High school deal with the journey of a young lady through a dark w...
8 Pages(2000 words)Literature review
sponsored ads
Save Your Time for More Important Things
Let us write or edit the essay on your topic "Environmental Issues of Canada" with a personal 20% discount.
GRAB THE BEST PAPER

Let us find you another Essay on topic Environmental Issues of Canada for FREE!