Comments (0)
Add to wishlistDelete from wishlist
Cite this document
Summary
There is no greater source of innovation within a country's economy than within its entrepreneurs. Entrepreneurship can be defined as "the process of creating value by bringing together a unique package of resources to exploit an opportunity" (Stevenson, Roberts, & Grousbeck, 1989)…
Download full paperFile format: .doc, available for editing
HIDE THIS PAPERGRAB THE BEST PAPER91.7% of users find it useful 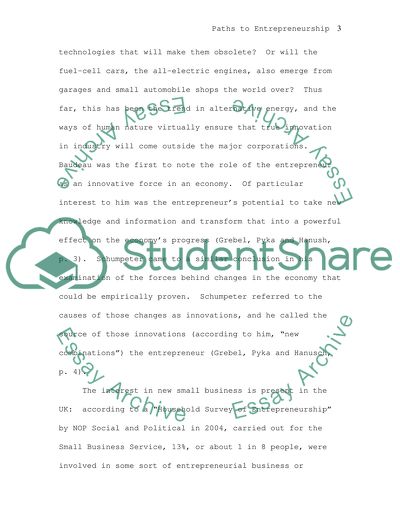 Extract of sample "Entrepreneurship: Opening doors to small businesses in the United Kingdom"

Download file to see previous pages The success story behind Dell Computers is similar - one man in Austin, who found a way to get inexpensive computers directly to the consumers, began filling orders from his garage as well. The reasons for this are many, but the corporate world does not, as a rule, welcome innovation. Once success has been attained, a corporation's primary concern becomes the bottom line. Experimentation does not have a predictable profit margin, and so it is not welcome within many corporate environments.
And so where is a particular economy supposed to receive its new ideas Does anyone think that BP or Texaco or ExxonMobil is interested in developing the engine technologies that will make them obsolete Or will the fuel-cell cars, the all-electric engines, also emerge from garages and small automobile shops the world over Thus far, this has been the trend in alternative energy, and the ways of human nature virtually ensure that true innovation in industry will come outside the major corporations. Baudeau was the first to note the role of the entrepreneur as an innovative force in an economy. Of particular interest to him was the entrepreneur's potential to take new knowledge and information and transform that into a powerful effect on the economy's progress (Grebel, Pyka and Hanush, p. 3). Schumpeter came to a similar conclusion in his examination of the forces behind changes in the economy that could be empirically proven. Schumpeter referred to the causes of those changes as innovations, and he called the source of those innovations (according to him, "new combinations") the entrepreneur (Grebel, Pyka and Hanusch, p. 4).
The interest in new small business is present in the UK: according to a "Household Survey of Entrepreneurship" by NOP Social and Political in 2004, carried out for the Small Business Service, 13%, or about 1 in 8 people, were involved in some sort of entrepreneurial business or activity. 11% more were contemplating beginning such a business themselves. While there was general optimism, 90% of respondents felt that, if a start-up business folds, its owners should be given the support to start over and try that business again.
But how can the government locate these entrepreneurs Many of the people sitting at home with great ideas do not possess the means, the initiative, or even the basic knowledge of how to get their small business started. There are two models that analyze how one can find these enterprising individuals - models that explain successful entrepreneurs based on how the people themselves respond to situations, and how those people's environments affect them; as three theorists put it:
Only in those cases where the actors' perceived comprehensive endowment appears to be sufficient to enter a market and the expected economic future signals promising rewards, is a new firm born. The birth process has an influence on the industry level, which in return has a feedback effect on the micro-level and thus the future decision processes of other agents as to whether to found a firm. (Grebel, Pyka and Hanusch, p.1)
In other words, entrepreneurs will only emerge and attempt a business if they feel like there is a good chance of success, both on the level of personal assets and the economic climate. Entrepreneurs tend to ...Download file to see next pagesRead More
Share:
Tags
Cite this document
(“Entrepreneurship: Opening doors to small businesses in the United Essay”, n.d.)
Retrieved from https://studentshare.org/miscellaneous/1504085-entrepreneurship-opening-doors-to-small-businesses-in-the-united-kingdom

“Entrepreneurship: Opening Doors to Small Businesses in the United Essay”, n.d. https://studentshare.org/miscellaneous/1504085-entrepreneurship-opening-doors-to-small-businesses-in-the-united-kingdom.
Comments (0)
Click to create a comment or rate a document

CHECK THESE SAMPLES OF Entrepreneurship: Opening doors to small businesses in the United Kingdom

When it comes to reliability factor big businesses are able to sustain because of their track record. Big businesses are able to pacify their customers using their past successful track records.
Nowadays most of the business opportunities and orders are posted online. This means that business providers need to be well integrated with supplier systems through online facilities. The infrastructure of the business model needs to be updated. But this is not an easy task for small businesses. E-based procurement is possible only with a well-maintained network on the internet. This requires a lot of financial and technical necessities which could not be supported by small businesses. On the other hand, Big businesses are well equip...
8 Pages(2000 words)Assignment
sponsored ads
Save Your Time for More Important Things
Let us write or edit the essay on your topic "Entrepreneurship: Opening doors to small businesses in the United Kingdom" with a personal 20% discount.
GRAB THE BEST PAPER

Let us find you another Essay on topic Entrepreneurship: Opening doors to small businesses in the United Kingdom for FREE!