Comments (0)
Add to wishlistDelete from wishlist
Cite this document
Summary
Roland Barthes, in his 1957 book Mythologies, argues exactly this: that no language use can be separated from structures of ideology and power. Barthes recognized that the signified can operate on two levels of signification- the primary level, that is, the most commonly accepted signified (four legs, barks, smells); and a secondary level of signification - the 'other' signifieds that we come to culturally accept (so with 'dog' this might be 'scoundrel' or 'ugly woman')…
Download full paperFile format: .doc, available for editing
HIDE THIS PAPERGRAB THE BEST PAPER91.2% of users find it useful 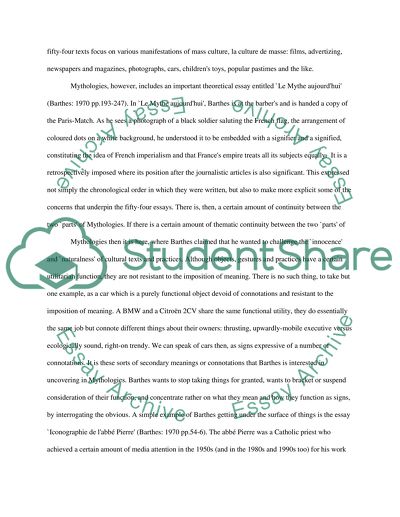 Download file to see previous pages He says that "All the toys one commonly sees are essentially a microcosm of the adult world" (Barthes, 1972, p.53), and that for instance, a girls doll is "meant to...'condition' her to her future role as mother" (Barthes, 1972, p.53). If we apply this to videogames, we can immediately see that semiotics, especially as applied to ideology, might shed more light on the role that games play in our globalised society. According to Barthes, French toys are an illustration of the belief that children are a miniature reflection of adults -toys offer too much direction - they do not allow children to engage in their own imaginative play. By providing children with "artificial" materials and toys are we, in turn, providing them with an "artificial" view of the world
Mythologies is a text which is not one but plural. It contains fifty-four (only twenty-eight in the Annette Lavers's English translation) short journalistic articles on a variety of subjects. These texts were written between 1954 and 1956 for the left-wing magazine Les Lettres nouvelles and very clearly belong to Barthes's priode "journalistique"' (Calvet: 1973 p.37). They all show a topicality, typical of good journalism. Because of their very topicality they provide the contemporary reader with a panorama of the events and trends that took place in the France of the 1950s. Although the texts are very much of and about their times, many still have an unsettling contemporary relevance to us today. The majority of the fifty-four texts focus on various manifestations of mass culture, la culture de masse: films, advertizing, newspapers and magazines, photographs, cars, children's toys, popular pastimes and the like.
Mythologies, however, includes an important theoretical essay entitled Le Mythe aujourd'hui' (Barthes: 1970 pp.193-247). In Le Mythe aujourd'hui', Barthes is at the barber's and is handed a copy of the Paris-Match. As he sees a photograph of a black soldier saluting the French flag, the arrangement of coloured dots on a white background, he understood it to be embedded with a signifier and a signified, constituting the idea of French imperialism and that France's empire treats all its subjects equally. It is a retrospectively imposed where its position after the journalistic articles is also significant. This expressed not simply the chronological order in which they were written, but also to make more explicit some of the concerns that underpin the fifty-four essays. There is, then, a certain amount of continuity between the two parts' of Mythologies. If there is a certain amount of thematic continuity between the two parts' of
Mythologies then it is here, where Barthes claimed that he wanted to challenge the innocence' and naturalness' of cultural texts and practices. Although objects, gestures and practices have a certain utilitarian function, they are not resistant to the imposition of meaning. There is no such thing, to take but one example, as a car which is a purely functional object devoid of connotations and resistant to the imposition of meaning. A BMW and a Citron 2CV share the same functional utility, they do essentially the same job but connote different things about their owners: thrusting, ...Download file to see next pagesRead More
Share:
Tags
Cite this document
(“Book Report Mythologies by Roland Barthes Essay Example | Topics and Well Written Essays - 750 words”, n.d.)
Retrieved from https://studentshare.org/miscellaneous/1504040-book-report-mythologies-by-roland-barthes

CHECK THESE SAMPLES OF Book Report Mythologies by Roland Barthes

A Reflection of the Process of Researching a Business Problem

The Experience in Working at Various Organizations

Loyalty in the exotic car market

...Introduction General Electric is certainly no longer what it was a few years ago under the dynamic and hard-driving leadership of Jack Welch. G.E. has a market cap of $169 billion but it had made huge bets in the financial sector which is not doing exactly very well for the last few years. As a result of this wrong bet, it is now scrambling to sell some assets and diverting cash away from dividends (Cox & Cyran, NYT). This is symptomatic of what seems wrong with G.E. today which is beginning to look like a poor shadow of its former self. It had been often compared to one of its rivals that can approximate G.E.s range of businesses in the aerospace, power generation and infrastructure sectors but with strong financial statements... General...
12 Pages(3000 words)Report
sponsored ads
Save Your Time for More Important Things
Let us write or edit the essay on your topic "Book Report Mythologies by Roland Barthes" with a personal 20% discount.
GRAB THE BEST PAPER

Let us find you another Essay on topic Book Report Mythologies by Roland Barthes for FREE!