Comments (0)
Add to wishlistDelete from wishlist
Cite this document
Summary
In treating patients, there are two ultimate endpoints for all: the road to recovery which leads to life and the road to cessation of all vital bodily functions which leads to death. Death is a word common to all human beings, amidst differences in race, age, sex, religion or occupation, we all will die at some point in time…
Download full paperFile format: .doc, available for editing
HIDE THIS PAPERGRAB THE BEST PAPER95.4% of users find it useful 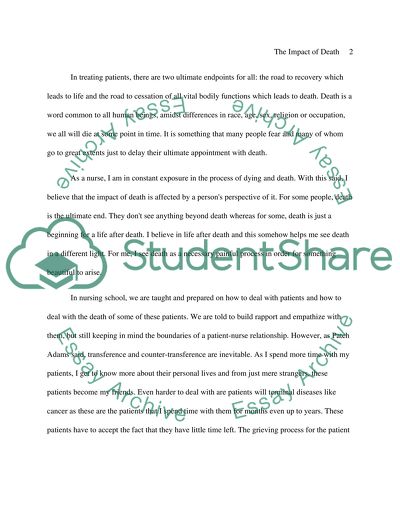 The Impact of Death Running Head: THE IMPACT OF DEATH The Impact of Death on Me as a Nurse and as a Person In APA Style (School/ University/ Affiliation)
The Impact of Death 2
In treating patients, there are two ultimate endpoints for all: the road to recovery which leads to life and the road to cessation of all vital bodily functions which leads to death. Death is a word common to all human beings, amidst differences in race, age, sex, religion or occupation, we all will die at some point in time. It is something that many people fear and many of whom go to great extents just to delay their ultimate appointment with death.
As a nurse, I am in constant exposure in the process of dying and death. With this said, I believe that the impact of death is affected by a person's perspective of it. For some people, death is the ultimate end. They don't see anything beyond death whereas for some, death is just a beginning for a life after death. I believe in life after death and this somehow helps me see death in a different light. For me, I see death as a necessary painful process in order for something beautiful to arise.
In nursing school, we are taught and prepared on how to deal with patients and how to deal with the death of some of these patients. We are told to build rapport and empathize with them, but still keeping in mind the boundaries of a patient-nurse relationship. However, as Patch Adams said, transference and counter-transference are inevitable. As I spend more time with my patients, I get to know more about their personal lives and from just mere strangers, these patients become my friends. Even harder to deal with are patients will terminal diseases like cancer as these are the patients that I spend time with them for months even up to years. These patients have to accept the fact that they have little time left. The grieving process for the patient and his loved ones start from the time of diagnosis. The hard part is that they have to deal with death while the person is still living.
The Impact of Death 3
Honestly, I am affected whenever I see my dying patients suffer not just physically, but emotionally as well. I grieve with them, comfort them and even cry with and for them. I allow myself to feel these emotions as I know these are normal reactions in losing someone who is valuable to you. Sometimes, it can take a toll on me and I find myself questioning and wondering what more could I have done for my patients. I trust that my colleagues and I did the best that we can do for the patient.
I plan to integrate my knowledge in dying, near-death experiences and death itself into my professional life as a nurse by being more sensitive to the needs of my patients. If there are warning signs of a patient's deteriorating health, I will immediately report it to my supervisor. Also, I plan to better equip myself in handling better these situations by being good in handling emergency situations. I will still continue to build friendships with my dying patients, but I'll limit the extent of my friendship, as per the guidelines for patient-nurse relationship. I will try everything that I can possibly do for the patient. I will also join forums of fellow healthcare friends to help me. As for my personal life, integrating death is best exemplified by how I deal with the business of my everyday life. It helps me not to take for granted the blessings that I have. Death also inspires me to see and appreciate life in a more positive way, helping me to live it to the fullest
The Impact of Death 4
References
National Public Radio. (1997). The End of Life : Exploring Death. Retrieved March 26, 2009, from http://www.npr.org/programs/death/trns.html Read More
Share:
Tags
Cite this document
(“Health Care and Death Essay Example | Topics and Well Written Essays - 500 words”, n.d.)
Health Care and Death Essay Example | Topics and Well Written Essays - 500 words. Retrieved from https://studentshare.org/miscellaneous/1503910-health-care-and-death

CHECK THESE SAMPLES OF Health Care and Death

Worse, because the family sometimes cannot afford to cover their medical expenses, these mentally ill patients end up with no medical care at all; they are forced to suffer the debilitating symptoms of their mental illness and to be subjected to worsening mental and general health conditions.
This paper shall discuss the lack of insurance among mentally ill patients. It shall first describe the mental health issue and the student’s position on such an issue. This paper shall also explain why this position is important and the relevance of the position to nursing practice, the mentally ill, and society. The rationale of this position shall be clearly explained and two factors that contribute to this issue shall be identi...
8 Pages(2000 words)Assignment
sponsored ads
Save Your Time for More Important Things
Let us write or edit the essay on your topic "Health Care and Death" with a personal 20% discount.
GRAB THE BEST PAPER

Let us find you another Essay on topic Health Care and Death for FREE!