Comments (0)
Add to wishlistDelete from wishlist
Cite this document
Summary
Love and lust have played vital roles in transformation of the healthy civilized society into the present perilous condition. The after math of the love for narcotics and lust for human body have resulted in many deadly diseases like cancer, AIDs, STIs and STDs, cardiovascular complications and so on…
Download full paperFile format: .doc, available for editing
HIDE THIS PAPERGRAB THE BEST PAPER94% of users find it useful 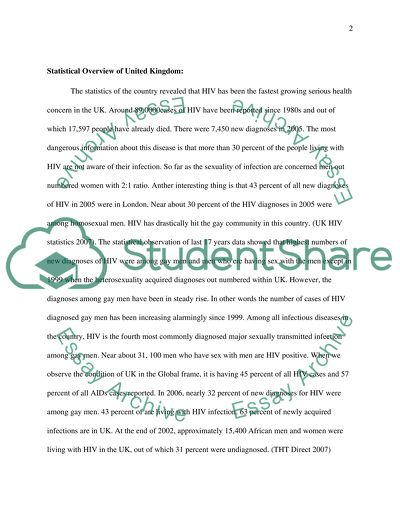 Extract of sample "Health and Health Care in London"

Download file to see previous pages The most horrifying feature of the United Kingdom's demographic feature can be revealed from its burgeoning public health issues over years. The ever rising population, uncontrolled pollution and the bestiality of human desire has dragged out the so called most civilized master of the medieval world to such a point where the future of the country is a big question for the thinkers and planners. A sizeable portion of the country's resources are being diverted towards combating diseases of modern era.
In 2007, over 33.2 million people on this earth were reported to have been infected by the HIV out of which 2.5 million were newly infected and 2.1 million people died of AIDS related illness in that year. Globally the Sub Saharan Africa reported 22.5million people living with this deadly disease. It was also reported highest deaths of 1.6 million and new infections of 1.7million followed by the South and South East Asia with 4 million infected people. However the Caribbean region is having second highest adult HIV with 1 percent of adult population infected. (THT Direct 2007)
The statistics of the country revealed that HIV has been the fastest growing serious health concern in the UK. Around 89,0000cases of HIV have been reported since 1980s and out of which 17,597 people have already died. There were 7,450 new diagnoses in 2005. The most dangerous information about this disease is that more than 30 percent of the people living with HIV are not aware of their infection. So far as the sexuality of infection are concerned men out numbered women with 2:1 ratio. Anther interesting thing is that 43 percent of all new diagnoses of HIV in 2005 were in London. Near about 30 percent of the HIV diagnoses in 2005 were among homosexual men. HIV has drastically hit the gay community in this country. (UK HIV statistics 2007). The statistical observation of last 17 years data showed that highest numbers of new diagnoses of HIV were among gay men and men who ere having sex with the men except in 1999 when the heterosexuality acquired diagnoses out numbered within UK. However, the diagnoses among gay men have been in steady rise. In other words the number of cases of HIV diagnosed gay men has been increasing alarmingly since 1999. Among all infectious diseases in the country, HIV is the fourth most commonly diagnosed major sexually transmitted infection among gay men. Near about 31, 100 men who have sex with men are HIV positive. When we observe the condition of UK in the Global frame, it is having 45 percent of all HIV cases and 57 percent of all AIDs cases reported. In 2006, nearly 32 percent of new diagnoses for HIV were among gay men. 43 percent of are living with HIV infection. 63 percent of newly acquired infections are in UK. At the end of 2002, approximately 15,400 African men and women were living with HIV in the UK, out of which 31 percent were undiagnosed. (THT Direct 2007)
Demographic and Ethnic Overview of London:
The number of people needing HIV care in London during 2005 was 22,473 and during 2006 it increased to 23,986. Between 2005 and 2006, 30 percent of people in the region living with HIV remain undiagnosed and the number of people accessing National Health Service for HIV in London has been reported to have increased by 7 percent. Nearly half of all gay men in London ...Download file to see next pagesRead More
Share:
Tags
Cite this document
(“Health and Health Care in London Essay Example | Topics and Well Written Essays - 2500 words”, n.d.)
Health and Health Care in London Essay Example | Topics and Well Written Essays - 2500 words. Retrieved from https://studentshare.org/miscellaneous/1500683-health-and-health-care-in-london

CHECK THESE SAMPLES OF Health and Health Care in London

Worse, because the family sometimes cannot afford to cover their medical expenses, these mentally ill patients end up with no medical care at all; they are forced to suffer the debilitating symptoms of their mental illness and to be subjected to worsening mental and general health conditions.
This paper shall discuss the lack of insurance among mentally ill patients. It shall first describe the mental health issue and the student’s position on such an issue. This paper shall also explain why this position is important and the relevance of the position to nursing practice, the mentally ill, and society. The rationale of this position shall be clearly explained and two factors that contribute to this issue shall be identi...
8 Pages(2000 words)Assignment
sponsored ads
Save Your Time for More Important Things
Let us write or edit the essay on your topic "Health and Health Care in London" with a personal 20% discount.
GRAB THE BEST PAPER

Let us find you another Essay on topic Health and Health Care in London for FREE!