Comments (0)
Add to wishlistDelete from wishlist
Cite this document
Summary
A long time before Canadian women had the right to vote, and the right to contest in provincial and federal elections, they participated in organizations that were devoted to educational development, especially in rural areas, giving support to churches, helping to promote stricter liquor laws, and fighting for the rights of women…
Download full paperFile format: .doc, available for editing
HIDE THIS PAPERGRAB THE BEST PAPER98.4% of users find it useful 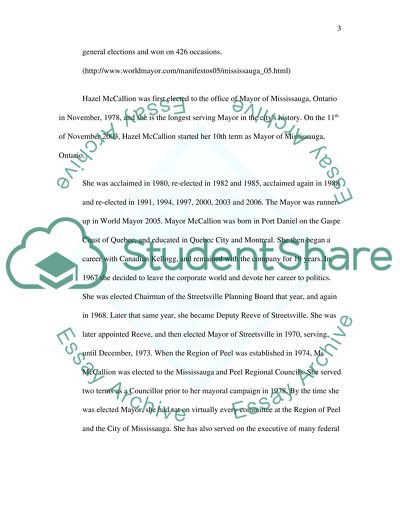 Download file to see previous pages Women only won the right to vote gradually in Canada and remain underrepresented in Parliament as well as in provincial legislatures. The first federal election in which women were able to vote and run as candidates was 1921. In that election, four women ran for office and Agnes Campbell MacPhail (1890-1954) made history as the first woman elected to the Canadian House of Commons. Between 1921 and 2006, 3402 women candidates stood in the 39 general elections and won on 426 occasions. (http://www.worldmayor.com/manifestos05/mississauga_05.html)
Hazel McCallion was first elected to the office of Mayor of Mississauga, Ontario in November, 1978, and she is the longest serving Mayor in the city's history. On the 11th of November 2003, Hazel McCallion started her 10th term as Mayor of Mississauga, Ontario.
She was acclaimed in 1980, re-elected in 1982 and 1985, acclaimed again in 1988 and re-elected in 1991, 1994, 1997, 2000, 2003 and 2006. The Mayor was runner-up in World Mayor 2005. Mayor McCallion was born in Port Daniel on the Gaspe Coast of Quebec, and educated in Quebec City and Montreal. She then began a career with Canadian Kellogg, and remained with the company for 19 years. In 1967 she decided to leave the corporate world and devote her career to politics. She was elected Chairman of the Streetsville Planning Board that year, and again in 1968. Later that same year, she became Deputy Reeve of Streetsville. She was later appointed Reeve, and then elected Mayor of Streetsville in 1970, serving until December, 1973. When the Region of Peel was established in 1974, Ms McCallion was elected to the Mississauga and Peel Regional Councils. She served two terms as a Councillor prior to her mayoral campaign in 1978. By the time she was elected Mayor, she had sat on virtually every committee at the Region of Peel and the City of Mississauga. She has also served on the executive of many federal and provincial committees and associations. (http://www.worldmayor.com/manifestos05/mississauga_05.html)
Nellie McClung (1873-1951) was an outstanding activist who was in the forefront for the fight for women's rights including the right to vote and be voted for, made some remarkable statements in 1929. She said, "We may live to see the day when women will no longer be news!" this hope has been realized in recent years - there is no questioning of women in politics today, and they have been voted for in every political arena. The Election Act of the Dominion stated that "no women, idiot, lunatic, or child" could vote.
Nellie McClung happens to be one of the numerous women who fought for women's rights in politics, and other professions. She was a member of an early feminist movement variously called Maternal, Moral, or Social Feminism. Their agitations were not just on the equality of life of women in all areas of society as "equality feminism" later proved to be. It was boarded on better health care, removal of restrictions, women's institutions, cultural activities etc. These activities ...Download file to see next pagesRead More
Share:
Tags
Cite this document
(“Ontario's Recod on Electing Women Essay Example | Topics and Well Written Essays - 2500 words”, n.d.)
Ontario's Recod on Electing Women Essay Example | Topics and Well Written Essays - 2500 words. Retrieved from https://studentshare.org/miscellaneous/1503866-ontarios-recod-on-electing-women

CHECK THESE SAMPLES OF Ontario's Recod on Electing Women

In the story, one symbolism used to represent the sensitivity and weakness of women is the chrysanthemums themselves. The chrysanthemums are described as having stems that are too small and easy for Elisa’s energy, and this is basically the same as her character. As a weak and sensitive woman, she easily becomes prey to the kindness displayed by the stranger. Just like the chrysanthemums that need to be constantly transplanted and regularly cut, women like Elisa easily believe what men tell them although this is not necessarily true. Moreover, the chrysanthemums are somehow ridiculed by Harvey when he tells Elisa, “Some of those yellow chrysanthemums you had this year were ten inches across…I wish you’d wo...
7 Pages(1750 words)Literature review
sponsored ads
Save Your Time for More Important Things
Let us write or edit the essay on your topic "Ontario's Recod on Electing Women" with a personal 20% discount.
GRAB THE BEST PAPER

Let us find you another Essay on topic Ontario's Recod on Electing Women for FREE!