Comments (0)
Add to wishlistDelete from wishlist
Cite this document
Summary
Having started the journey in 1976 the company has seen many milestones. Today it appears that Apple Computer Inc. is the sole successful escapee from the IBM and Microsoft hegemony in the personal computer field. Headquartered in Cupertino, California, Apple Computer designs, manufactures and markets personal computers and related software, services, peripherals, and networking solutions…
Download full paperFile format: .doc, available for editing
HIDE THIS PAPERGRAB THE BEST PAPER93.9% of users find it useful 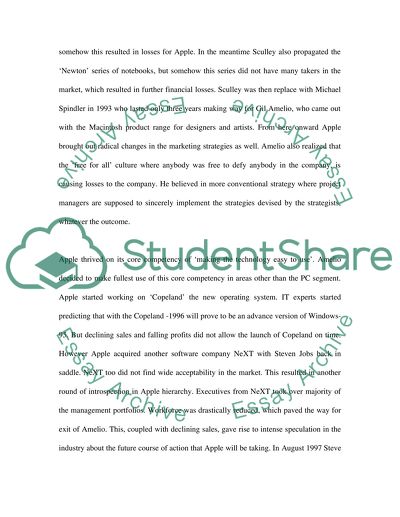 Download file to see previous pages It employs about 14,800 people. Apple experienced good success during the late 1980s but testing times during the 90s. John Sculley, previously the CEO joined Apple in 1983. Sculley had the valuable experience of the 'Cola-War' between Coke and Pepsi. He was full of marketing ideas and wanted to implement them in Apple as well. Steven Jobs, more of technology oriented initially found this approach little weird, but later gave Sculley a free hand.
Realizing the importance of strategic alliance, Apple had a tie up with IBM in 1991 to target the areas where Apple lacked the developmental skills but owing to cultural and other differences the alliance did not last long. Sculley did an introspection and identified some key areas where more professionalism was required in the approach of Apple. For example discipline, work schedule and cost management were the areas put on notice. As part of marketing strategy, Apple also reduced the prices of existing products. But somehow this resulted in losses for Apple. In the meantime Sculley also propagated the 'Newton' series of notebooks, but somehow this series did not have many takers in the market, which resulted in further financial losses. Sculley was then replace with Michael Spindler in 1993 who lasted only three years making way for Gil Amelio, who came out with the Macintosh product range for designers and artists. From here onward Apple brought out radical changes in the marketing strategies as well. Amelio also realized that the 'free for all' culture where anybody was free to defy anybody in the company, is causing losses to the company. He believed in more conventional strategy where project managers are supposed to sincerely implement the strategies devised by the strategists, whatever the outcome.
Apple thrived on its core competency of 'making the technology easy to use'. Amelio decided to make fullest use of this core competency in areas other than the PC segment. Apple started working on 'Copeland' the new operating system. IT experts started predicting that with the Copeland -1996 will prove to be an advance version of Windows-95. But declining sales and falling profits did not allow the launch of Copeland on time. However Apple acquired another software company NeXT with Steven Jobs back in saddle. NeXT too did not find wide acceptability in the market. This resulted in another round of introspection in Apple hierarchy. Executives from NeXT took over majority of the management portfolios. Workforce was drastically reduced, which paved the way for exit of Amelio. This, coupled with declining sales, gave rise to intense speculation in the industry about the future course of action that Apple will be taking. In August 1997 Steve Jobs announced a strategic tie-up with its long time rival Microsoft. Microsoft invested $150 million in Apple and the agreement stated that, 'Microsoft would develop and distribute office applications fro the Apple Macintosh while Apple would bundle Microsoft's Internet Explorer in future Mac products.' This provided a new lease of life for Apple, while for Microsoft it was a strategic move to lower the level of competition in the industry. As a result of this tie up Apple became profitable again in 1998. Now the challenging task for Jobs was to widen the market for Mac, because so far Mac was popular amongst ...Download file to see next pagesRead More
Share:
Tags
Cite this document
(“Apple Strategy (1984-2004) Essay Example | Topics and Well Written Essays - 2500 words”, n.d.)
Apple Strategy (1984-2004) Essay Example | Topics and Well Written Essays - 2500 words. Retrieved from https://studentshare.org/miscellaneous/1503524-apple-strategy-1984-2004

Ryanair has a simple business strategy: make travel affordable with low fares thanks to basic service, without frills. This concept, experienced first in the US in the early fifties, gave birth to one of the biggest success stories of the last 20 years...
7 Pages(1750 words)Case Study

Education, profession, geographic location and parental status are some of the dimensions which influence the perspectives and identities of people; this is the basic interpretation of diversity. Using diversity as a concept, it includes everyone. In several ways, the initiatives of diversity match the compliance programs of non-discrimination through crafting an environment for the workplace and promoting an organizational culture that allows for such differences. Diversity is also about dignity and respect for all, about learning from others who are not similar to us, and about building environments and practices for the workplace which will encourage learning from others and being able to grasp the benefits of this diversity (H...
11 Pages(2750 words)Case Study

iPhone became one of the most discussed new technology products, surpassing the wider coverage of other very well-known mobile phones that have been playing the best roles in the market. When Apple CEO Steve Jobs stood on the stage at the Macworld Expo in San Francisco and announced “We’re going to make some history together; Today Apple is going to reinvent the phone” (Jobs 2007), it could really influence...
8 Pages(2000 words)Case Study
sponsored ads
Save Your Time for More Important Things
Let us write or edit the essay on your topic "Apple Strategy (1984-2004)" with a personal 20% discount.
GRAB THE BEST PAPER