Comments (0)
Add to wishlistDelete from wishlist
Cite this document
Summary
Various rights have been accorded to disabled employees to boost their chances of establishing equal playing fields as changes in political administrations have influenced the evolution of laws concerning disability discrimination. Nevertheless, some firms still failed to practise the prescribed regulations.
…
Download full paperFile format: .doc, available for editing
HIDE THIS PAPERGRAB THE BEST PAPER93.4% of users find it useful 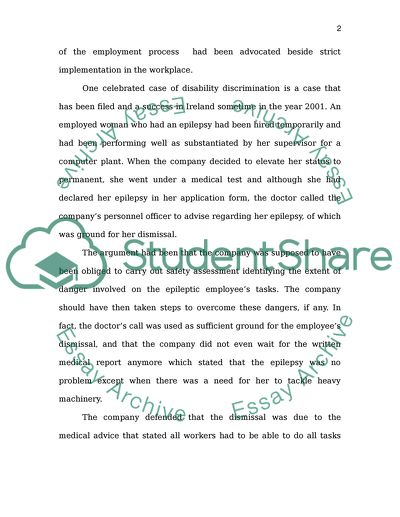 Download file to see previous pages What makes matters worse is that the susceptibility of disabled workers to be inflicted with further physical damages is sometimes ignored, or simply taken for granted.
Legislatures outlawing discrimination exist and are updated from time to time to cater to the varying degree of needs by workers, and yet incidences are still filed to various concerned agencies. Total elimination of disability discrimination has to start from at the onset of the employment process had been advocated beside strict implementation in the workplace.
One celebrated case of disability discrimination is a case that has been filed and a success in Ireland sometime in the year 2001. An employed woman who had an epilepsy had been hired temporarily and had been performing well as substantiated by her supervisor for a computer plant. When the company decided to elevate her status to permanent, she went under a medical test and although she had declared her epilepsy in her application form, the doctor called the company's personnel officer to advise regarding her epilepsy, of which was ground for her dismissal.
The argument had been that the company was supposed to have been obliged to carry out safety assessment identifying the extent of danger involved on the epileptic employee's tasks. The company should have then taken steps to overcome these dangers, if any. In fact, the doctor's call was used as sufficient ground for the employee's dismissal, and that the company did not even wait for the written medical report anymore which stated that the epilepsy was no problem except when there was a need for her to tackle heavy machinery.
The company defended that the dismissal was due to the medical advice that stated all workers had to be able to do all tasks and that the claimant's job involved heavy machinery. Nevertheless, it admitted that the employee was dismissed because of her epilepsy.
The Labour Court surmised that the worker was not obliged to work on heavy machinery all the time and it was possible that the company could have arranged ways for her not to use machinery at all. The company was obliged to consider providing the employee with reasonable facilities which could have overcome difficulties. The employer was fined IEP (ISO currency code for the Irish Punt) 15,000 awarded to the epileptic employee (EIRO, 2006).
Another case of disability discrimination had been acted on an assistant bookkeeper who worked for 30 years for her employer. She already had two back surgeries during that time and her doctor advised she would need another. She applied for a leave which was granted and she soon spent the next days training another younger employee assigned to replace her temporarily.
After her successful surgery and recovery period, she called on her manager regarding her plan to resume work. Instead, her manager said her services are no longer needed and even suggested she could resign voluntarily although there had been a plan to terminate her employment.
When she refused to quit, she was terminated that same week for "poor performance." Nelson filed charge alleging that she was terminated because of her disability and her age. In response, the employer disputed the fired employee's claim of disability but only back problems, and that she ...Download file to see next pagesRead More
Share:
Tags
Cite this document
(“Does Christian Salvesen's sickness absence management policy meet its Essay”, n.d.)
Does Christian Salvesen's sickness absence management policy meet its Essay. Retrieved from https://studentshare.org/miscellaneous/1503503-does-christian-salvesens-sickness-absence-management-policy-meet-its-obligations-under-the-dda

... are different. But it is hoped that EU will continue to pursue its expansion in a rational way. On all fronts, one sees an expanding EU. Its official languages have increased from four to 23. This speaks about the imaginative and forward-looking European method of integration and its capacity to overcome the institutional and constitutional impediments. At present there are seven applicants whose membership is under consideration, and that of Turkey is pending since 1987. In the process of preparation, yet another problem exists for the candidate country. Though the topic of enlargement is often mentioned in the meetings of EU, it does not have a plan cut-out for the purpose in view. It does not extend invitation to any country...
9 Pages(2250 words)Case Study
sponsored ads
Save Your Time for More Important Things
Let us write or edit the essay on your topic "Does Christian Salvesen's sickness absence management policy meet its obligations under the DDA" with a personal 20% discount.
GRAB THE BEST PAPER

Let us find you another Essay on topic Does Christian Salvesen's sickness absence management policy meet its obligations under the DDA for FREE!