Comments (0)
Add to wishlistDelete from wishlist
Cite this document
Summary
Leadership is a very complex idea as hardly anyone has been able to grasp where it emerges from and how persons emerge as leaders. I have been fortunate enough to emerge as a leader at least on two occasions…
Download full paperFile format: .doc, available for editing
HIDE THIS PAPERGRAB THE BEST PAPER98.6% of users find it useful 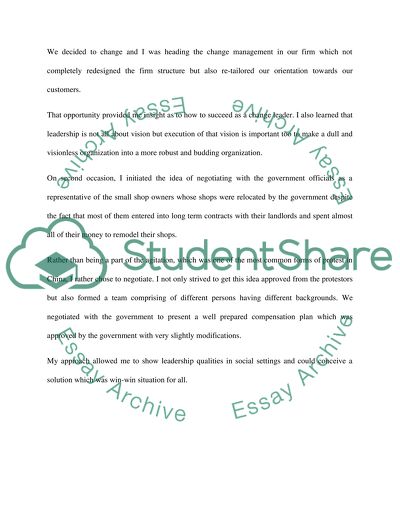 Extract of sample "Leadership. Two Occasions of my Lidership"

Where in your background would we find evidence of your leadership capa and/or potential Leadership is a very complex idea as hardly anyone has been able to grasp where it emerges from and how persons emerge as leaders. I have been fortunate enough to emerge as a leader at least on two occasions.
I and two of my friends co-founded a financial advisory company with the name of Gravity Advisor Inc. In its first year, firm has been able to close out four successful deals suggesting that new and nascent firms, in an industry which is dominated by giants like Goldman Sachs and Morgan Stanley, can succeed too provided they take into account reality. I am a proactive person and realize that in order to succeed in this industry; we must evolve into a company and grow ourselves as leaders in our chosen segmented market.
This idea was floated by me to our co-founders but relying on their success in first year; they were resistant to change however I decided to carry on with this idea and called a brainstorming session with our employees. During that session, we come up with many issues which we believed were restricting the growth of our firm. I also further decided to bring my former boss, who was once, one of the successful leaders with a very well developed firm serving a niche market which however could not have survived and was sold merely for US$5 million only. That meeting proved one of the catalysts for my partners to think more strategically because the kind of competitive landscaped we faced were such that it demanded a comprehensive overhaul of our current thinking.
We decided to change and I was heading the change management in our firm which not completely redesigned the firm structure but also re-tailored our orientation towards our customers.
That opportunity provided me insight as to how to succeed as a change leader. I also learned that leadership is not all about vision but execution of that vision is important too to make a dull and visionless organization into a more robust and budding organization.
On second occasion, I initiated the idea of negotiating with the government officials as a representative of the small shop owners whose shops were relocated by the government despite the fact that most of them entered into long term contracts with their landlords and spent almost all of their money to remodel their shops.
Rather than being a part of the agitation, which was one of the most common forms of protest in China, I rather chose to negotiate. I not only strived to get this idea approved from the protestors but also formed a team comprising of different persons having different backgrounds. We negotiated with the government to present a well prepared compensation plan which was approved by the government with very slightly modifications.
My approach allowed me to show leadership qualities in social settings and could conceive a solution which was win-win situation for all. Read More
Share:
Tags
Cite this document
(“Leadership. Two Occasions of my Lidership Personal Statement”, n.d.)
Retrieved from https://studentshare.org/miscellaneous/1503497-where-in-your-background-would-we-find-evidence-of-your-leadership-capacity-andor-potential

“Leadership. Two Occasions of My Lidership Personal Statement”, n.d. https://studentshare.org/miscellaneous/1503497-where-in-your-background-would-we-find-evidence-of-your-leadership-capacity-andor-potential.
Comments (0)
Click to create a comment or rate a document

CHECK THESE SAMPLES OF Leadership. Two Occasions of my Lidership

..., and law, which enhanced the firm’s value for clients. The social gratitude I developed while relentlessly working towards the establishment of 100 Hope Schools and the social responsibly induced into the corporate system of Gravity, would help me more to peruse the social aspects of my career vision. An MBA from Yale would accelerate these strategy formations by evaluating them against the scientific and management standards. The Yale DNA would add more to my career, team and the firm’s future. 2: Leadership Example Describe a professional accomplishment that exhibits your leadership style. The accomplishment should include evidence of your leadership skills, a description of the actions you took, as well as the impact you had on your...
6 Pages(1500 words)Essay

...My History As A I am from Jordan and I came to the United s with my parents when I was 20 years old. My parents were convinced beyond reasonable doubt that the United States was the best place for us to start a new life and make something out of ourselves so we packed out bags and head out for the land promise. We settled in the United States and started a new life. Living in a foreign land has its advantages and disadvantages. On of the main problems that I came across during my first few months in America was the language barrier. I have learned how to speak the English language while I was a student in Jordan but what I learned in school was not the same as the language used in the streets of the United States. My American friends...
8 Pages(2000 words)Essay
sponsored ads
Save Your Time for More Important Things
Let us write or edit the personal statement on your topic "Leadership. Two Occasions of my Lidership" with a personal 20% discount.
GRAB THE BEST PAPER

Let us find you another Personal Statement on topic Leadership. Two Occasions of my Lidership for FREE!