The cognitive and biological approaches to Panic Disorder - Essay Example

Comments (0)
Add to wishlistDelete from wishlist
Cite this document
Summary
According to the DSM-IV, panic disorder is classified as an anxiety disorder consisting of repeated and unexpected panic attacks. Panic Disorder (PD) is a condition that is characterized by recurring sudden increases in anxiety accompanied by a variety of intense bodily symptoms…
Download full paperFile format: .doc, available for editing
HIDE THIS PAPERGRAB THE BEST PAPER93% of users find it useful 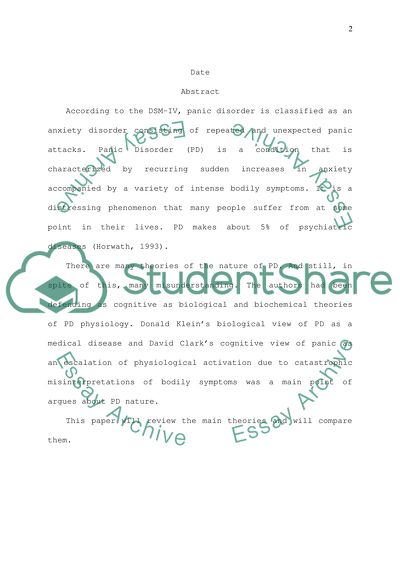 Extract of sample "The cognitive and biological approaches to Panic Disorder"

Download file to see previous pages Donald Klein's biological view of PD as a medical disease and David Clark's cognitive view of panic as an escalation of physiological activation due to catastrophic misinterpretations of bodily symptoms was a main point of argues about PD nature.
The common features of PD include a racing or pounding heartbeat; dizziness and lightheadedness; feeling that "I can't catch my breath"; chest pains or a "heaviness" in the chest; flushes or chills; tingling in the hands, feet, legs, arms; jumpiness, trembling, twitching muscles; sweaty palms, flushed face; terror; fear of losing control; fear of a stroke that will lead to disability; fear of dying; fear of going crazy, etc. Sometimes stomach disorders are seen (Lydiard, 1994).A panic attack typically lasts several long minutes and is one of the most distressing conditions a person can experience. In some cases, panic attacks have been known to last for longer periods of time or to recur very quickly over and over again. The aftermath of a panic attack is very painful. The greatest fear is that the panic attack will come back again and again, making life too miserable to bear (Warshaw,2000).
Panic is not necessarily brought on by a recognizable circumstance, and it may remain a mystery to the person involved. At other times, excessive stress or other negative life conditions can trigger an attack (Katerndahl,2000).
Much research was carried out to understanding the biological and psychological mechanisms of PD and to developing effective treatments. A working consensus has been reached regarding its clinical features (as laid down in DSM-IV) and guidelines for its psychological or pharmacological treatments are delineated in documents from the NIH and the American Psychiatric Association.
A number of theories have been suggested and tested. The majority of them are based on biochemical or physiological markers. Still, the exact etiology has not been found.
The aim of this paper is to review the main theories of PD and to discuss them.
Classification of theories
1. The serotonergic model suggests an exaggerated postsynaptic receptor response to synaptic serotonin. Recent studies report subsensitivity of 5HT1A receptors. The 5HT system or one of its subsystems may play a role in the pathophysiology of panic disorder, the precise nature of which must be delineated by further investigation.
2. The catecholamine model postulates increased sensitivity to adrenergic CNS discharges, with hypersensitivity of presynaptic alpha-2 receptors.
3. Similarly, the locus ceruleus model explains that panic symptoms are due to increased local discharge resulting in adrenergic neuron stimulation, similar to the more general catecholamine theory. Locus ceruleus activity also affects the hypothalamic-pituitary-adrenal axis, which can respond abnormally to clonidine in patients with panic disorder.
4. The lactate model focuses on symptom production by postulated aberrant metabolic activity induced by lactate.
5. The false suffocation carbon ...Download file to see next pagesRead More
Share:
Tags
Cite this document
(“The cognitive and biological approaches to Panic Disorder Essay”, n.d.)
The cognitive and biological approaches to Panic Disorder Essay. Retrieved from https://studentshare.org/miscellaneous/1503444-the-cognitive-and-biological-approaches-to-panic-disorder

“The Cognitive and Biological Approaches to Panic Disorder Essay”, n.d. https://studentshare.org/miscellaneous/1503444-the-cognitive-and-biological-approaches-to-panic-disorder.
Comments (0)
Click to create a comment or rate a document

While behaviorism emerged during an era where mankind was turning to science to provide answers to natural phenomena, it has faced criticism for its premise of rejecting phenomena ascribed to the consciousness. According to Broad, “…behaviorism in particular….are instances of the numerous class of theories which are so preposterousl...

Erving Goffman was an astute observer of society, who immersed himself in the social environment which he was studying. He carefully observed and recorded the ways in which people’s behavior and interpersonal interactions are carried out in everyday life. He notes that “people perform their social roles and, as they do so, they produce social order through their actions and the regu...
6 Pages(1500 words)Article
sponsored ads
Save Your Time for More Important Things
Let us write or edit the essay on your topic "The cognitive and biological approaches to Panic Disorder" with a personal 20% discount.
GRAB THE BEST PAPER

Let us find you another Essay on topic The cognitive and biological approaches to Panic Disorder for FREE!