Comments (0)
Add to wishlistDelete from wishlist
Cite this document
Summary
The American-British war of 1812, often called the "Second War of Independence" (Canada, Chap 4), is perhaps the least talked-about War in American history, certainly compared to the much more famous European Wars of the same year. These wars are not unconnected however, as the British involvement in the Napoleonic War was one of the main causes of the breakdown in relations between it and its former colony of the United States…
Download full paperFile format: .doc, available for editing
HIDE THIS PAPERGRAB THE BEST PAPER98.9% of users find it useful 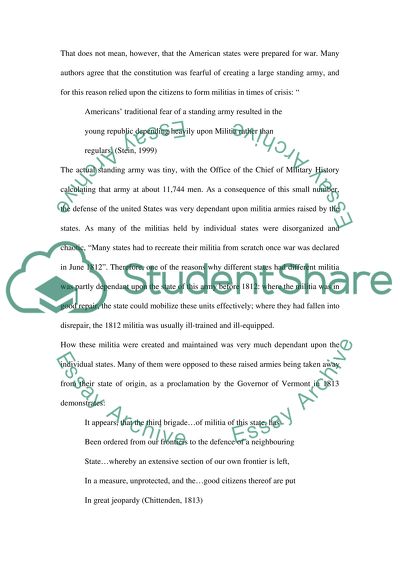 Download file to see previous pages In addition, many on the western front believed that Britain was involved with Native Americans in the attacks upon settlers
Confrontation seemed inevitable, and coincident with a declaration of war was the fact that most of the political power resided in the South and the West; The same people who were anxious to go to war with Britain were also the ones whom the president needed to support him in what was, after all, the year of the presidential election. War was almost certain under these conditions.
That does not mean, however, that the American states were prepared for war. Many authors agree that the constitution was fearful of creating a large standing army, and for this reason relied upon the citizens to form militias in times of crisis: "
The actual standing army was tiny, with the Office of the Chief of Military History calculating that army at about 11,744 men. As a consequence of this small number, the defense of the united States was very dependant upon militia armies raised by the states. As many of the militias held by individual states were disorganized and chaotic, "Many states had to recreate their militia from scratch once war was declared in June 1812". Therefore, one of the reasons why different states had different militia was partly dependant upon the state of this army before 1812: where the militia was in good repair, the state could mobilize these units effectively; where they had fallen into disrepair, the 1812 militia was usually ill-trained and ill-equipped.
How these militia were created and maintained was very much dependant upon the individual states. Many of them were opposed to these raised armies being taken away from their state of origin, as a proclamation by the Governor of Vermont in 1813 demonstrates:
It appears, that the third brigadeof militia of this state, has
Been ordered from our frontiers to the defence of a neighbouring
Statewhereby an extensive section of our own frontier is left,
In a measure, unprotected, and thegood citizens thereof are put
In great jeopardy (Chittenden, 1813)
The federal governments were unwilling to put large numbers of their men at the disposal of the National government, and especially, they did not want to see their troops moved out of their province in order to defend another state.
There were other reasons why federal states might be unwilling to put up large militias. While many of the Western states wanted the war, states such as New England actually sided with England, and "Massachusetts Governor Caleb Strong even attempted secret negotiations with England with a planfor New England to secede from the Union" (Lutins, 2007). So the second reason for differences in the militia is the differences in support (or lack thereof) for the war.
Both of these reasons were also interacting with the great problem which the United States had with federal governments, which is the reluctance of the States to grant power ...Download file to see next pagesRead More
Share:
Tags
Cite this document
(“Militia in the War of 1812 Essay Example | Topics and Well Written Essays - 750 words”, n.d.)
Retrieved from https://studentshare.org/miscellaneous/1503120-militia-in-the-war-of-1812

CHECK THESE SAMPLES OF Militia in the War of 1812

...? The War of 1812  SSG Eric Harrington  25N3O-004-11  The War of 1812 Introduction: One of the long forgotten and least talked about wars in the history of America is the War of 1812 (historycentral.com, n.d.). The War of 1812 happened between Great Britain and the United States. The war commenced on June 1812 and continued up to the spring season of 1815, despite the fact that the war was theoretically terminated in December 1814 with a peace treaty signed in Europe. The war mainly took place along the border of Canada in general and along the Gulf of Mexico and the Chesapeake Bay region in particular. A lot of incidents related to the war also happened in the sea. Background Events Leading to the War: The war was instigated in 1783 after...
6 Pages(1500 words)Essay

... The Mexican war of 1812 Introduction The Mexican war of 1812 falls among the fiercest wars recorded in the history of America. John Freemont, the then chosen commander got orders from Washington DC to attack the Mexican convert. Several causes led to the War of 1812 between United States and British Empire (United Kingdom and Britain’s Indian allies) from 1812 to 1815. Historians assert that the trade restrictions imposed by Britain in order to impeded United States from trading with France agitated the US since they were illegal under the existing international law. Britain was engaged in war with France and wanted to curtail the trade capability of its enemies thus cutting trading channels (Wait 42). At the same time, Britain had...
3 Pages(750 words)Essay

... Baltimore where it was turned back by the Maryland militia. At the same time, the Americans were halting other offensives in northern New York at Plattsburgh and in the south at New Orleans where Gen. Andrew Jackson once again led American forces to a decisive victory, "ironically, after peace negotiators had concluded a treaty". (Roark, et al; pp. 223-224). The 1814 Treaty of Ghent that ended the war of 1812 resulted in the Americans giving in on impressments and relinquishing any claims to Canada. For their part, the British agreed to abandon their western forts and aid to Indians. (Roark, et al; pp. 223-224). The Federalist Party was disgraced because in December 1814 New England Federalists had met in Hartford, Connecticut, to discuss...
4 Pages(1000 words)Essay

...War of 1812 The war of 1812had a great impact on national identity of the nation and its unity, self-determination and sovereignty. The war of1812 can be characterized as one of the milestone events in American history which led to formation of the state and the nation. It is considered that this war is the second War of Independence as it has similar roots and consequences for the American nation1. The historical significance of the war of 1812 is that it opened new opportunities for the American people to fight for personal freedom and liberty, independence and self-governance. Similar to the War of Independence (1775-1783), the war of 1812 was a result of conflicts between the Great Britain and the USA over spheres of influence...
2 Pages(500 words)Essay

...Battle of Thames – 5 October 1813 The Battle of Thames took place in Thames, Ontario, near Moraviantown which was home to Delaware Indians who had become Christians. The battle took place on 5 October 1813 and while it was a small battle in military terms, the outcome had many serious consequences for the overall War of 1812 (The Royal Canadian Geographical Society, 2011). The War of 1812 had initially stemmed from a litany of complaints based on British blockading of Europe under Napoleon. The Americans had vessels stopped and searched; civilians and soldiers were taken from ships and some were even forcibly taken into British service. As well, the economy of the fledgling American state was suffering due to restricted European...
2 Pages(500 words)Assignment

... War 1812 Studies so far conducted contend 1812 war was quite a transformative event for the US. Although a number of Americans were against the nation’s decision of going to the war, at its conclusion most of them felt more rejuvenated than before (Cantor). This is because through the war, US realized that it ought to make a number of changes in the field regarding state’s security. It is due to this fact that to date US has global recognition of having the most powerful military force. This is because after the war US replaced state militias, most of which were unreliable, with an army that was not only skilled but also more professional (Cantor). The 1812 war had a number of heroes as well as heroines, whereby the most common being...
1 Pages(250 words)Assignment

...Q Ans. The status of slavery started to change with the victory of the Republicans in the elections. “In the Union army, over 179,000 African American men served in over 160 units, as well as more serving in the Navy and in support positions” (Escott). In their attempt to safeguard the supremacy of white men and continue the black slavery, fundamentalist Southerners selected secession whereas the Northerners were of the view that the Union’s collapse will bring the likelihood of a democratic republican government to an end. These events led to the Civil War and set the stage for the termination of slavery in America. The goal of antislavery Republicans was to restore the Union and abolish slavery. They wanted the war to continue until...
1 Pages(250 words)Assignment

...The War of 1812 War is definitely one of the most harmful events possible but sometimes war can turn into an efficient fundamental for further development of some side of the conflict. The War of 1812 was that kind of war which laid the groundwork for postwar economic growth of the United States. The history of the war is full of different aspects but the fact is that war can be called the second one for independency of the United States as it actually strengthened the country on world political and economic arenas. The War of 1812 is an armed conflict between the United States (including some territories of modern Canada) and the United Kingdom of Great Britain and Ireland in the times of the Napoleonic Wars. The issue of the war...
2 Pages(500 words)Essay

The United State’s declaration of war on Great Britain on June 18, 1812, was unexpected. The main reason cited for America’s declaration of war was Britain’s highhandedness on the Atlantic. The British Navy arbitrarily stopped and searched American ships for British deserters and sought to prevent American trade with Napoleonic France by capturing American vessels bound for French ports and by seizing goods destined for France. This infringement of its’ maritime rights was resented by the United States, which also coveted British Canada. The Americans used the pretext of ‘the Indian question’ to justify their invasion of Canada and accused the Indian agents at British ports along the Great Lakes...
11 Pages(2750 words)Coursework
sponsored ads
Save Your Time for More Important Things
Let us write or edit the essay on your topic "Militia in the War of 1812" with a personal 20% discount.
GRAB THE BEST PAPER

Let us find you another Essay on topic Militia in the War of 1812 for FREE!