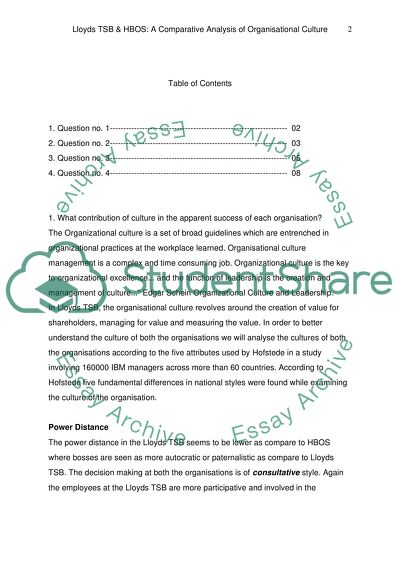 Download file to see previous pages In order to better understand the culture of both the organisations we will analyse the cultures of both the organisations according to the five attributes used by Hofstede in a study involving 160000 IBM managers across more than 60 countries. According to Hofstede five fundamental differences in national styles were found while examining the culture of the organisation.
The power distance in the Lloyds TSB seems to be lower as compare to HBOS where bosses are seen as more autocratic or paternalistic as compare to Lloyds TSB. The decision making at both the organisations is of consultative style. Again the employees at the Lloyds TSB are more participative and involved in the operations and decision making of the organisation as compare to HBOS (Higgs, 1996).
Individualism is prevalent in the British culture as a result both the organisations have the culture of organising the work in such a way that the self interest of employees is aligned with the management of the organisation (Huczynski & Buchanan, 2007).
As described by Hofstede (1997, p. 120) described uncertainty avoiding societies are a society where there are many formal laws and informal rules controlling the rights and duties of employers and employees. At Llyods TSB the uncertainty avoidance is at low level therefore the organisation effectively implement teams with higher levels of autonomy. Whereas again at HBOS the employee empowerment is lower as compare to Lloyds TSB.
Masculinity
In both the organisations masculinity and Femininity traits are prevalent and can be experienced by undertaking an analysis of the behaviours of the managers. Hence the notion of learning by experience is not centric (Burden and Proctor, 2000).
Confucian dynamism
As mentioned by Hofstede there is higher acceptance of the legitimacy of hierarchy and the valuing of perseverance and thrift, all without undue emphasis on tradition and social obligations which could impede business initiative in the Western cultures. The organisational cultures of both the organisations verify the findings of Hofstede.
2. How would you describe the prevailing leadership styles employed by each organisation
A leader has the qualities to influence others through his persuasive measures such as the communication, display of confidence, can gain information regarding the problem being addressed and persuade the masses in the desired direction (Prasad, 2006; p. 264).

...? Impacts of e-business technologies on the nature of competition within Lloyds TSB Insert of Impacts ofe- technology on competition Technological advancements in the current business world have had great impacts on the way businesses operate. To some it has been very beneficial while to others as well, technology has had profound negative impacts on their businesses due to the losses and costs that have to be incurred by these businesses to try and fix all these problems caused as a result of business malpractices. Bynolfsson notes that e- Business as it is commonly referred to involve getting services through the electronic medium as well as offering these services through the internet (Bynjolfsson 2000). As a matter of facts...
4 Pages(1000 words)Essay

...﻿Topic: Lloyds TSB Bank (stakeholders)( Gup, B, 1998) Today, there are more people who are in debt than fifty years ago. But this does not mean that it is “a little shameful” for people to be in debt. Being in debt benefits both the lender and the borrower. The lender makes a living by lending money and in return earns interest income. The lenders help the economy to be more vigorous because the borrowers will put up a business. The borrowers use the money to put up a business or two which they believe, based on hindsight or feasibility study, will generate a income. What is more important is not “a person should not be in debt” ,but rather, will the person entering into a formal loan agreement be able to pay the loan...
10 Pages(2500 words)Research Paper

...HBOS, a leading banking and insurance group in the United Kingdom is a holding company for Halifax plc. It is popularly known as Halifax Bank of Scotland. Formed by the merger of Bank of Scotland and Halifax, HBOS has emerged as fourth biggest financial service provider in UK. The merger of two banking mammoths happened during the wave of consolidation in the late 1990's. Before taking over Halifax, Bank of Scotland had a hostile take over of NatWest, another financial company. In 2001, HBOS has hit the headline again by taking over Lloyds TSB. It was the HBOS Group Reorganisation Act 2006, a private Act of Parliament, which gives more operational freedom to the group. With this Bank of Scotland has become its principal banking subsidiary...
6 Pages(1500 words)Essay

...﻿HBO’s Organizational Strategy and Culture Over the period of time HBO has been one of the most successful T.V. Channels relying largely on its strengths in producing original and different contents which won many accolades for the channel for producing original work of excellent literary quality. It is one of the premium television programming wings of the Time Warner Inc. Providing round the clock telecast, this channel reach millions of viewers not only in America but also in other parts of the world. A closer look at the historical overview of the organizational strategy and culture at the channel would suggest that it has transformed itself from a Channel having a very rigid and bureaucratic organizational set up to one where...
10 Pages(2500 words)Essay

The Lloyds Building of London

...﻿The Lloyd’s Building of London The Lloyd’s building was started in 1979 but was not completed until 1984. As a result, the finished design evidences a complex combination of Modern and Postmodern ideals. The building is essentially a tall structured office complex that unusually features its service elements on the exterior of the building rather than hidden in the walls. These features are made to represent and replace decorative elements for the outer façade. The focus on the mechanical elements is a distinguishing feature of the Modernist movement while its recognition that everything is in a constant state of change, requiring the ability to quickly change out parts, is a characteristic of the Postmodern. Located in the center...
6 Pages(1500 words)Essay

...﻿Digital Business Management: Critical Evaluation of Lloyds Bank Website Introduction Since the inception of ICT as well as ICT technologies, a lot of changes have been noted on the business scene. First of all, a lot of businesses (companies) have developed an online presence where they seek to showcase their products and/ or services to their consumers through the use of a digital system such as the website. Moreover, a lot of businesses that conducted traditional commerce have now implemented the use of e-commerce dynamic websites which have with themselves a lot of benefits. With that mentioned, here are some of the benefits that businesses such as Lloyds Bank can attain/ have already attained with the implementation of digital systems...
10 Pages(2500 words)Coursework

...STRATEGY DEFINITION OF LLOYDS BANK TSB By Location Strategy Definition of Lloyds Bank TSB Strategy ment of Lloyds Bank TSB To grow our franchise balance sheet by 40-50% in five years by providing businesses, communities, and households with an outstanding customer experience by adopting a simple and straightforward banking model that can sustain growth and efficiency. Description of Lloyds Bank TSB strategy Statement As Rukstad and Collis highlighted, some organizations choose to place customers at the core of their business strategy. This is the case with Lloyds Bank TSB (Collis & Rukstad 2008, p. 85). The Lloyds Bank TSB intents to become a financial institution, which exhibits positive financial growth. Unlike other players...
2 Pages(500 words)Essay

The Current and Future use of Internet Technologies for LLoyds TSB

...﻿The Current and Future use of Internet Technologies' for LLoyds TSB Executive Summary Lloyds TSB Group is one of the foremost organizational groups in UK. It has approximately 66,000 employees in the UK and in 27 countries all over the world. Lloyds TSB business serves about 16 million customers, functioning in a multiplicity of financial markets. These integrate corporate banking, personal and classified banking mortgages and insurance. In this report I will analyze the Lloyds TSB internet business.1 Here I have aim to discuss and analyze the current and future use of Internet Technologies by the Lloyds TSB. This report also includes the recommendation regarding the Web design, E-Marketing and B2B area and also regarding the Sales...
6 Pages(1500 words)Case Study

...﻿Maritime Policy Introduction ''There is no doubt that the flag of convenience era has left a deep tarnish on the image of flags and states, and there persists a wide gap between the competence and performance levels between the best and worst flag administrations'' (Lloyd's List 03/09/02). If our world were perfect, the flag States would be able to wash their hands of the affair, and rely on their ship-owners, norms of manufacture, protection and procedures, which guarantee the security in the waters. Coastal States in their turn would have any reasons to care about with the preservation of this security. The current system of flag state management is not perfect. Unfortunately, it is a well-known fact, that some flag States do not act...
12 Pages(3000 words)Research Paper

The two main brands of the company in England are Lloyds TSB as well as Halifax while in Scotland the company’s main brand is Bank of Scotland. The company tries to keep its cost down and improve its services to customers as the company can deliver effectiveness through shared services (Lloyds Banking Group, n.d.).

There are several means of raising capital in an organization. One such means applied by Lloyds Banking Group has been the right issue. The company sold its new shares at a discount. It was found that the existing shareholders of the company were offered new shares in ratio to their holdings. The left out shares that were not sold were bought by other investors as well as investment banks underwriting...

...﻿ Lloyds and TSB merger. Executive summary This report examines the merger between Lloyds Bank and the Trustee Savings Bank (TSB) in 1995 that resulted in Lloyds TSB Plc (Matthews et al, 2007, pp. 2031-2032). It also looks at the present day circumstances and situation of Lloyds TSB. It has been uncovered that the merger between Lloyds Bank and TSB has served the interests of both the Lloyds Banking Group and shareholders. Evidence of the above is contained in the fact that Lloyds is the market leader in the retail banking sector in the UK (John Gilbert Financial Research, 2012, p. 1) its share price has increased steadily over the past year (London Stock Exchange, 2014a, p. 1), and investor confidence is at an all-time high (Lloyds TSB...
8 Pages(2000 words)Case Study

..., political, economic and social factors of the country. Strategic competences and other internal factors also affect the company’s entry into Bangladesh. Lloyds Banking Group is a UK-based bank formed in 2009 after Lloyds TSB acquired HBOS. The bank’s model is based on five strategic platforms: low risk, customer focus, UK relationship, low cost and commercial banking. The entry of the bank into the Bangladesh market depends on the ability of this model to fit into the macro and microenvironment of Bangladeshi financial sector. For example, the company’s focus on commercial banking is suitable for Bangladesh because the country’s economy is significantly driven by business. However, the UK-focus strategy poses a threat to expansion...
12 Pages(3000 words)Case Study
sponsored ads
Save Your Time for More Important Things
Let us write or edit the case study on your topic "Lloyds TSB & HBOS" with a personal 20% discount.
GRAB THE BEST PAPER

Let us find you another Case Study on topic Lloyds TSB & HBOS for FREE!