Comments (0)
Add to wishlistDelete from wishlist
Cite this document
Summary
Bulgaria is par of the Southeastern Europe that has been found to be growing in terms of its economic rate, specifically on the last five years. However, based on records, this country has had series of problems regarding employment, gender difference of its populace and even on its political situation.
…
Download full paperFile format: .doc, available for editing
HIDE THIS PAPERGRAB THE BEST PAPER94.4% of users find it useful 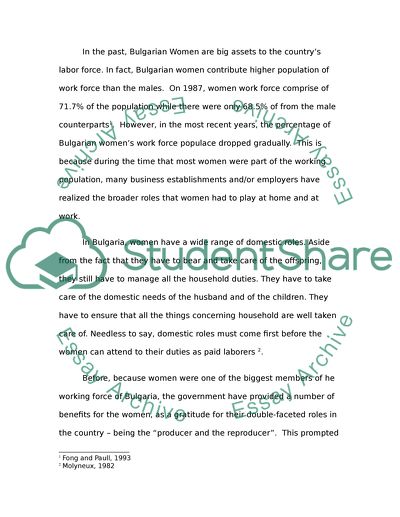 Download file to see previous pages In fact, Bulgarian women contribute higher population of work force than the males. On 1987, women work force comprise of 71.7% of the population while there were only 68.5% of from the male counterparts1. However, in the most recent years, the percentage of Bulgarian women's work force populace dropped gradually. This is because during the time that most women were part of the working population, many business establishments and/or employers have realized the broader roles that women had to play at home and at work.
In Bulgaria, women have a wide range of domestic roles. Aside from the fact that they have to bear and take care of the offspring, they still have to manage all the household duties. They have to take care of the domestic needs of the husband and of the children. They have to ensure that all the things concerning household are well taken care of. Needless to say, domestic roles must come first before the women can attend to their duties as paid laborers 2.
Before, because women were one of the biggest members of he working force of Bulgaria, the government have provided a number of benefits for the women, as a gratitude for their double-faceted roles in the country - being the "producer and the reproducer". This prompted for the establishment of maternity leaves in this part of Southeastern Europe. Moreover, alternative work schedules and child care were also formulated3.
B
But because there are more women paid laborers during that time, more companies had to suffer in terms of growth and earnings. More so, it was reported that although most Bulgarian women were so keen to working, they passion to work diminishes as they started to build their own family.
"women place high value on women's paid labor as a source of independence and personal fulfillment; however, it also appears that for most Czechoslovak women a home and children are of greater importance than a job"4
At the same time, in response to the global perspective of working towards a market economy, more companies have to ensure that the company's allocation of resources is handled properly and efficiently. The cal for "stabilizing and restructuring measures including price liberalization, liberalization of imports, private sector growth, macroeconomic anti-inflationary policy, and internal convertibility" was enacted. The stabilization and structural adjustment of the companies established a series of change for the women labor force. Gradually, more and more companies opted to hire male workers than females5.
The implementation of "neo-liberal type of economic restructuring" in Bulgaria has affected its women populace. There were reports rendering that "the marginalization and/or exclusion of women incurred by cutbacks in state-funded services such as health care, child care, family planning, education, and sectoral restructuring with heavy reductions in bureaucracy and civil services" was experienced mostly by women6.
Further research revealed that eventually, Bulgarian women who are in the labor force ...Download file to see next pagesRead More
Share:
Tags
Cite this document
(“Mobilization of Bulgarian women after the fall of communism (in Essay”, n.d.)
Retrieved from https://studentshare.org/miscellaneous/1502862-mobilization-of-bulgarian-women-after-the-fall-of-communism-in-bulgaria

(Mobilization of Bulgarian Women After the Fall of Communism (in Essay)
https://studentshare.org/miscellaneous/1502862-mobilization-of-bulgarian-women-after-the-fall-of-communism-in-bulgaria.

“Mobilization of Bulgarian Women After the Fall of Communism (in Essay”, n.d. https://studentshare.org/miscellaneous/1502862-mobilization-of-bulgarian-women-after-the-fall-of-communism-in-bulgaria.
Comments (0)
Click to create a comment or rate a document

In the story, one symbolism used to represent the sensitivity and weakness of women is the chrysanthemums themselves. The chrysanthemums are described as having stems that are too small and easy for Elisa’s energy, and this is basically the same as her character. As a weak and sensitive woman, she easily becomes prey to the kindness displayed by the stranger. Just like the chrysanthemums that need to be constantly transplanted and regularly cut, women like Elisa easily believe what men tell them although this is not necessarily true. Moreover, the chrysanthemums are somehow ridiculed by Harvey when he tells Elisa, “Some of those yellow chrysanthemums you had this year were ten inches across…I wish you’d wo...
7 Pages(1750 words)Literature review
sponsored ads
Save Your Time for More Important Things
Let us write or edit the essay on your topic "Mobilization of Bulgarian women after the fall of communism (in Bulgaria)" with a personal 20% discount.
GRAB THE BEST PAPER

Let us find you another Essay on topic Mobilization of Bulgarian women after the fall of communism (in Bulgaria) for FREE!