Comments (0)
Add to wishlistDelete from wishlist
Cite this document
Summary
Taking-off for a new height, fly with us" is an apt tag line for the current British Airway's situation. A take-off is a very positive move, although it necessitates a temporary halt. This promotional theme is very apt for the company as first, it is an airline company and second it is experiencing a halt in its growth…
Download full paperFile format: .doc, available for editing
HIDE THIS PAPERGRAB THE BEST PAPER97.7% of users find it useful 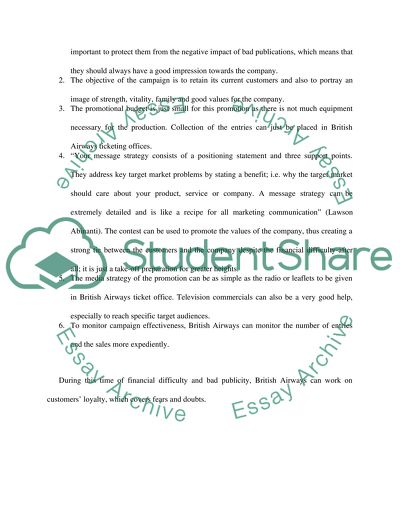 Promotions "Taking-off for a new height, fly with us" is an apt tag line for the current British Airway's situation. A take-off is a very positive move, although it necessitates a temporary halt. This promotional theme is very apt for the company as first, it is an airline company and second it is experiencing a halt in its growth. The halt in growth or actually a decline in performance can be seen as a temporary one by the public, depending on how British Airlines makes projects it.
The elements of the promotion mix are personal selling, sales promotion, public relations, direct mail, trade fair and exhibitions, advertising and sponsorship. (Marketing Teacher Ltd ).
One of the ways to promote is through contests (The New York Times Company).
"Contests offer an attractive marketing vehicle for small business to acquire new clients and create awareness" (The New York Times Company).
British Airways can conduct a contest on the best story of flying experience by its customers. Particularly, it should tackle about the values that can be earned from those experiences. This contest will be open to all; however, the entries should be coupled with at least a round-trip ticket for the last 3 months and for the succeeding months. Particularly, it should be a story telling about taking off to new heights in life-may it be a flying story of a person who decided to leave his family to study or work abroad or simply conquering the fear of heights.
The step by step process would be:
1. The target audience is mainly the loyal customers of British Airways. This is comprised of the people who have become a priced possession for the company. Thus, it is very important to protect them from the negative impact of bad publications, which means that they should always have a good impression towards the company.
2. The objective of the campaign is to retain its current customers and also to portray an image of strength, vitality, family and good values for the company.
3. The promotional budget is just small for this promotion as there is not much equipment necessary for the production. Collection of the entries can just be placed in British Airways ticketing offices.
4. "Your message strategy consists of a positioning statement and three support points. They address key target market problems by stating a benefit; i.e. why the target market should care about your product, service or company. A message strategy can be extremely detailed and is like a recipe for all marketing communication" (Lawson Abinanti). The contest can be used to promote the values of the company, thus creating a strong tie between the customers and the company despite the financial difficulty-after all; it is just a take-off preparation for greater heights.
5. The media strategy of the promotion can be as simple as the radio or leaflets to be given in British Airways ticket office. Television commercials can also be a very good help, especially to reach specific target audiences.
6. To monitor campaign effectiveness, British Airways can monitor the number of entries and the sales more expediently.
During this time of financial difficulty and bad publicity, British Airways can work on customers' loyalty, which covers fears and doubts.
Works Cited
Lawson Abinanti. "http://www.messagesthatmatter.com." 26 July 2009 .
Marketing Teacher Ltd . http://www.marketingteacher.com. 26 July 2009 .
The New York Times Company. http://sbinformation.about.com. 26 July 2009 . Read More
Share:
Tags
Cite this document
(“British Airways Cuts Expenditures Essay Example | Topics and Well Written Essays - 500 words”, n.d.)
British Airways Cuts Expenditures Essay Example | Topics and Well Written Essays - 500 words. Retrieved from https://studentshare.org/miscellaneous/1502842-british-airways-cuts-expenditures

A strong argument for increased prison sentences is the positive consequences of deterrence. However, the significant increase in the prison population has not correlated with a similar reduction in violent crime. The evidence showing whether an increase in prisoners is cost-effective in regards to a reduction of crime is mixed. Research demonstrates that “prison may have cost beneficial for violent crimes, but it also...

The relationship between attitude and behavior has also not been significant. Proper segmentation is the solution to make a differentiation. This requires a value-based segmentation. It is not possible to cater to all the people and hence the strengths should be ascertained through customer interactions. This helps in reaching the target segment and positioning the product according to the segment. Merely having a huge database is not a determinant of segmentation. The market is customer-driven and hence understanding the customer needs and wants is critical to success.

Globalization and internationalization have made market segmentation a strategic tool that companies have to use. It helps in well-informed decision mak...

Goal of the Public Expenditure Cuts Has Not Been Achieved

In that light, the goals of these spending cuts were to help reduce signs and even eliminate government borrowing; this paper evaluates whether the spending cuts imposed by the UK government were successful in achieving the anticipated outcomes. Similarly, this paper will critically analyze the consequences of the spending cuts in the public sector by highlighting some of the critical areas of public service that have suffered adverse impacts following the tightening of public sector budgets across the board. this paper proposes that since the UK governments’ Annually-managed Expenditure (AME) has been on an upwards trend just like the Departmental Expenditure Limits (DEL), public spending remains as high as before the cuts...
7 Pages(1750 words)Term Paper
sponsored ads
Save Your Time for More Important Things
Let us write or edit the essay on your topic "British Airways Cuts Expenditures" with a personal 20% discount.
GRAB THE BEST PAPER

Let us find you another Essay on topic British Airways Cuts Expenditures for FREE!