Comments (0)
Add to wishlistDelete from wishlist
Cite this document
Summary
A patient Ms X has been admitted to hospital; she is semi comatose and unresponsive. No medical history is available. She is approximately 40-50 years old, she has a respiratory rate of 31 and a blood Ph of 7.05, her breath has a very distinctive odour.
A blood sample has been obtained, it has been centrifuged and plasma separated for analysis…
Download full paperFile format: .doc, available for editing
HIDE THIS PAPERGRAB THE BEST PAPER96% of users find it useful 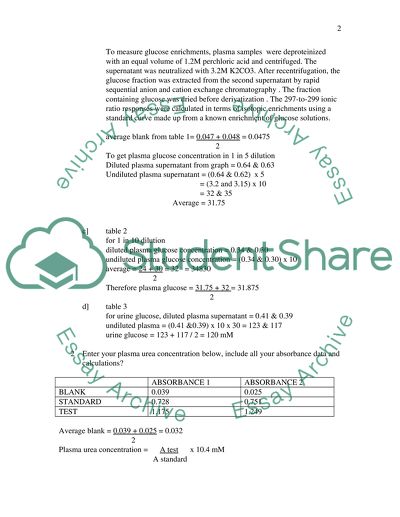 Average blank = 0.039 + 0.025 = 0.032
2
Plasma urea concentration = A test x 10.4 mM
A standard
=p/q x 10.4
P = (1.175 - 0.032) + (1.249 - 0.032) = 1.415 = 0.7075
2 2
q= (0.728 - 0.032) + (0.751 - 0.032) = 2.36 = 1.18
2 2
Plasma urea concentration = p/q x 10.4 = 1.18 x 10.4 = 17.35 mM
Plasma urea concentration is elevated.
0.7075
3. Enter your urinary ketones result
+ + 40 - 100 mg/dl (4.0 - 10mmol) - increased
elevated blood acetone and beta-hydroxybutyric acid
4. What is your diagnosis Explain clearly how this accounts for the glucose, urea and ketone results
The diagnosis is diabetic ketoacidosis (DKA). Three key features of diabetic ketoacidosis are hyperglycemia, ketosis, and acidosis. The conditions that cause these metabolic abnormalities overlap. DKA is defined as an increase in the serum concentration of ketones greater than 5 mEq/L, a blood glucose level of greater than 250 mg/dL (although it is usually much higher),blood pH of less than 7.2, and a bicarbonate level of 18 mEq/L or less. DKA usually occurs as a consequence of absolute or relative insulin deficiency that is accompanied by an increase in counter-regulatory hormones (ie, glucagon, cortisol, growth hormone, epinephrine). This type of hormonal imbalance enhances hepatic gluconeogenesis, glycogenolysis, and lipolysis.
Hepatic gluconeogenesis, glycogenolysis secondary to insulin deficiency, and counter-regulatory hormone excess result in severe hyperglycemia, while lipolysis increases serum free fatty acids. Hepatic metabolism of free fatty acids as an alternative energy source (ie, ketogenesis) results in accumulation of acidic intermediate and end metabolites (ie, ketones, ketoacids). Ketones include acetone, beta hydroxybutyrate, and acetoacetate. Ketones, in particular beta hydroxybutyrate, induce nausea and vomiting that consequently aggravate fluid and electrolyte loss already existing in DKA. Moreover, acetone produces the characteristic fruity breath odor of ketotic patients.
Hyperglycemia usually exceeds the renal threshold of glucose absorption and results in significant glycosuria. Consequently, water loss in the urine is increased due to osmotic diuresis induced by glycosuria. This incidence of increased water loss results in severe dehydration, thirst, tissue hypoperfusion, and, possibly, lactic acidosis.
Typical free water loss in DKA is approximately 6 liters or nearly 100 mL/kg of body weight. The initial half of this amount is derived from intracellular fluid and precedes signs of dehydration, while the other half is from extracellular fluid and is responsible for signs of dehydration.
5. How does your diagnosis explain Ms X clinical signs on admission Explain
the mechanism whereby respiration controls blood pH. What would you expect to happen to Ms X respiration rate as her blood pH increases
Upon admission Ms X was being diagnosed to have diabetic ketoacidosis due to the following symptoms. Because of the acetone it produces a characteristic odor which was observed in the patient. The normal blood pH is 7.35-7.45, Ms X blood pH is lowering which may result in metabolic acidosis. Progressive rise of blood concentration of these acidic organic substances initially leads to a state of ketonemia. Natural body buffers can buffer ketonemia in its early stages. When the accumulated ketones exceed the body's capacity of extracting them, they overflow into urine (ie, ketonuria). If the situation is not treated promptly, more accumulation of organic acids leads to frank clinical metabolic acidosis (ie, ketoacidosis), with a drop in pH and bicarbonate serum levels. Respiratory compensation of this acidotic condition results in rapid shallow breathing (Kussmaul respirations). Kussmaul's inspiration-The rapid, deep, and labored respiration observed in patients with diabetic ketoacidosis; an involuntary mechanism to excrete carbon dioxide in order to reduce carbonic-acid level. Ms X has a low blood pH resulting in rapid shallow breathing. However if the blood pH was increased the breathing will slow down and the respiration will be normalize. The breathing rate increases when blood is acidic (too much carbon dioxide in the blood) and decreases when blood is too basic (too little carbon dioxide in the blood).
References:
1. http://www.ecureme.com/emyhealth/data/Diabetic_Ketoacidosis.asp Read More
Share:
Tags
Cite this document
(“Clinical Chemistry Practical Essay Example | Topics and Well Written Essays - 500 words”, n.d.)
Clinical Chemistry Practical Essay Example | Topics and Well Written Essays - 500 words. Retrieved from https://studentshare.org/miscellaneous/1502773-clinical-chemistry-practical

...? Clinical Chemistry - Thyroid Function Patients suspected for hypothyroidism are requested for number of laboratory work ups to confirm the diagnosis and determine the underlying etiology. The first step in evaluating most thyroid diseases is to measure the TSH levels. Normal TSH levels rule out any primary cause of hypothyroidism but not the secondary causes. Elevated levels of TSH reflect a primary cause that requires further evaluation. Next step is to determine the unbound T4 levels as low levels of unbound T4 signify the presence of primary hypothyroidism. As autoimmune hypothyroidism is most common primary cause, detecting presence of thyroid peroxidase antibodies (TPOAb) will confirm the diagnosis. If these antibodies are absent...
19 Pages(4750 words)Essay

...CHEMISTRY QUESTIONS Presented Intramolecular forces operate within the molecules or fundamental units of a substance. This would include the attraction between positive and negative ions in a crystal of an ionic compound, the covalent bonds in a molecular substance as well as the covalent bonds linking atoms in a network structure, such as that of carbon (diamond).Metallic bonds are also classified as intramolecular forces (Frederick, 1979, P.63)Intermolecular forces operate between, rather than within, the molecules of a covalent substance. This would include the attractions exerted by one molecule of a molecular substance on another, such as the force of attraction between water molecules in ice ,the attractions between atoms...
2 Pages(500 words)Essay

...Chemistry Practical Assignment Introduction: Copper carbonate if heated will produce gas and by measuring the volume of gas, we can experimentally establish the correctness of both the equations provided to us. The important thing for finding the correct equation is that the volume of one mole of gas at NTP is 22.4 liter and using this equation we can back calculate the mole or mass of carbon dioxide formed from the copper carbonate used for the experiment (Determining the Correct Equation for the Decomposition of Copper Carbonate, 2003) and hence find out the correctness of the eauation provided. Equipment and Apparatus required for conducting the experiment: The following apparatuses are required to conduct the experiment...
4 Pages(1000 words)Lab Report

... x100 = 65.62%. 137x27 Question – 3 a. In 1870, Markonikov laid down a basic principle of chemistry that holds till today. The Markonikov Rule states that when a hydrogen halide (Hydrochloric acid, HCl being an example) reacts with an asymmetrically substituted alkene the hydrogen attaches itself to the carbon atom that has the larger number of its hydrogen atoms substituted. The halogen automatically attaches itself to the carbon atom having the least number of its hydrogens substituted. An example of such an addition reaction: Cl2HC=CH2Cl + HCl  Cl2H 2 C=CH2Cl2 Here the halide chlorine attached to the right hand side of the molecule that had fewer hydrogen atoms replaced. b. Enantiomers are two molecules...
4 Pages(1000 words)Essay

...Chemistry Question One A and B Properties of gold, cube Density of gold = 19.3g/ml A Mass 11.439g B Volume of water 5.1ml With gold cube = 5.7ml a) The graduated cylinder has an accuracy of 0.1 ml, the electronic balance has an accuracy of 0.0001 g. according to the measurements given on volume they are accurate according to the minimum readable measurement given by the cylinder. The measurement given on the mass seems not to be accurate because the minimum measure of mass according to the apparatus is 0.0001, therefore if the measure was exactly 11.439 g then this should have been written as 11.4390 g. b) Volume of the gold cube 5.7 – 5.1 = 0.6ml c) Density and mass find volume of gold cube Density = Mass/Volume Volume = Mass/Density...
6 Pages(1500 words)Essay

﻿Nursing reflection
Introduction
Nursing is one of the most challenging fields in the world today given the level of diversity in the medical field in the recent times. The absolute fulfillment of the requirements of all medical need of all patients is the greatest need for all persons in the nursing fraternity in order to ensure the provision of quality assistance to all patients. Medical practitioners (Johns, 2000) are required to exercise their skills in a free and fair manner ensuring that all persons are treated equally as the ethical concerns dictate. A lot of challenges face nurses in the field today as regards the extraction of information from the patients. As Kurtz, Silverman, & Draper, (2005) mentions, closely int...
2 Pages(500 words)Essay

Identification by mass sets this element as the third-most abundant element in the universe after elements of hydrogen and helium. Representatively by dry air volume, oxygen forms about 20.9476% (209,460 ppmv) of the atmosphere by volume at the sea level temperatures of 150C; thus, making it the third largest compound.
Understanding the composition of oxygen and its molecular composition is essential in its incorporation to further chemical uses given that it is a primary atmospheric industrial gas product. For instance, given that one has 32 grams of oxygen, this will be equivalent to one mole of Oxygen gas while 16 grams of the same would be a representation of Oxygen element. This implies that the molecular mass of Oxygen i...
4 Pages(1000 words)Term Paper
sponsored ads
Save Your Time for More Important Things
Let us write or edit the essay on your topic "Clinical Chemistry Practical" with a personal 20% discount.
GRAB THE BEST PAPER

Let us find you another Essay on topic Clinical Chemistry Practical for FREE!