Comments (0)
Add to wishlistDelete from wishlist
Cite this document
Summary
Project fails. Despite a few known cases of successful project development and implementation, it is widely accepted in the industry that a number of unacceptable projects fail, especially in the IT/IS sector. According to Lyytinen and Hirschheim (1987), the estimated number of project failures is half of all the systems implemented…
Download full paperFile format: .doc, available for editing
HIDE THIS PAPERGRAB THE BEST PAPER92.2% of users find it useful 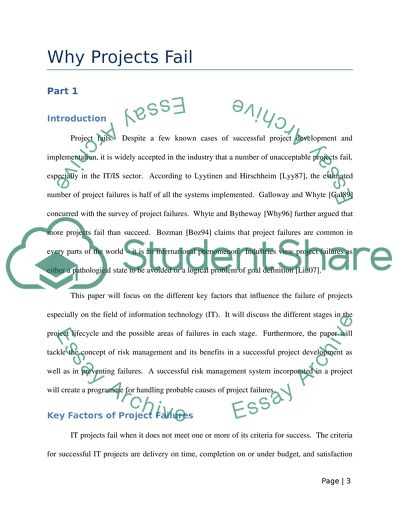 Download file to see previous pages Industries view project failures as either a pathological state to be avoided or a logical problem of goal definition (Lindahl & Rehn, 2007).
This paper will focus on the different key factors that influence the failure of projects especially on the field of information technology (IT). It will discuss the different stages in the project lifecycle and the possible areas of failures in each stage. Furthermore, the paper will tackle the concept of risk management and its benefits in a successful project development as well as in preventing failures. A successful risk management system incorporated in a project will create a programme for handling probable causes of project failures.
IT projects fail when it does not meet one or more of its criteria for success. The criteria for successful IT projects are delivery on time, completion on or under budget, and satisfaction of user requirements. Only a few projects achieve all three (Grossman, 2003). In summary, failure can be defined as a system which does not perform as expected, not operational at a specified time and cannot be used in the way expected.
There are four key factors that can be associated with project failures. These are design, data, cost and operations. A poor design phase can result in a system that does not match customer expectation, or fails to capture the basic business requirements. The data factor may include inaccurate, inconsistent, not available or incomplete information and records. The cost factor involves the operational costs to implement and run the system that far exceeds the identified business benefit. A survey showed that 35% of all major information systems projects are over budget, termed "runaways", such as the Stock Exchange Taurus Project and the London Ambulance Service (Flowers, 1996).
Project Lifecycle
The project lifecycle defines the beginning and the end of a project. It is a collection of generally sequential and sometimes overlapping project phases whose name and number are determined by the management and control needs of the organisation (Project Management Institute, Inc, 2008). It also determines which transitional actions are included and which are not in every stage of the project from beginning to end. It can be used to link the project to the ongoing operations of the organisation. (Choudhuri, 2005)
The first phase of the lifecycle is the initiating process which involves those processes performed to define a new project by obtaining the authorization needed to start the project. The second phase is the planning process which includes those processes required in establishing the scope of the project, refining the objectives, and defining the course of action in order to attain the objectives of the project. The third phase is the executing process which encompasses those processes performed to complete the work defined and to satisfy project specifications. The fourth phase is the monitoring and controlling process which includes those processes required to track, review, and regulate the progress and performance of the project. The last phase is the closing process which considers those processes performed to finalise all activities to formally close the project. (Project Management Institute, Inc, 2008)
Causes of Project Failures
In every phase of the project ...Download file to see next pagesRead More
Share:
Tags
Cite this document
(“Different key factors that influence the failure of projects Essay”, n.d.)
Different key factors that influence the failure of projects Essay. Retrieved from https://studentshare.org/miscellaneous/1502772-different-key-factors-that-influence-the-failure-of-projects

“Different Key Factors That Influence the Failure of Projects Essay”, n.d. https://studentshare.org/miscellaneous/1502772-different-key-factors-that-influence-the-failure-of-projects.
Comments (0)
Click to create a comment or rate a document

... as another selling point of the corporation as the personnel is provided with a glimpse as to how the business is run and what appears to be the priority of the business in terms of assets. In this manner, an effective leadership example is conducted which, in the long run, be a basis of control and authority over the people. Factors Affecting Human Resource Planning The process of selecting personnel, placing them into key positions in the corporation and the over-all management of the affairs of the human resources is affected by a variety of factors. That is, the manner by which human resource management is conducted is influenced in large part, by the corporate mandate, its set goals and objectives, financial capabilities, systemic...
10 Pages(2500 words)Research Paper

... responsibilities that accompany such an identity. For example, the initiation process demands that a person conducts an atrocity such as murder in order to prove him self loyal and capable of following orders. On becomes alienated and more of a slave since once he joins a gang, there is no chance of going back to normal civilian life as deserters are always viewed as traitors and the punishment for that may sometimes include death. Media influence has also been noted as a key contributing factor towards gang behavior. According to Reavy (2007), experts believed that the media has a great role in the rising cases of juvenile delinquency and other criminal activities such as gang violence in Utah. Majority of youths have access to television...
5 Pages(1250 words)Research Paper

Factors that Influence the Mind

... Factors that influence the mind Human being and how they behave is influenced by many factors, which operate in their surroundings. These factors are manifested on the way the being will react to such stimuli which derives their response from the mind. The five major factors that would influence how the mind works include the following:- place, each and every place that the human being goes has a different effect on the mind, there is a way in which an individual will feel in one place and feel differently in others. An environment can be that full of singing, talking or meditating and all of these places would have a different feeling on the person (Henslin & James, pg. 253). Moreover, time is a factor that influences the mind...
3 Pages(750 words)Essay

...?SUCCESS FACTORS IN DATA WAREHOUSE PROJECTS Success Factors in Data Warehouse Projects Affiliation Introduction A data warehouseis a large database containing reporting and query tools that stores recent and past data collected from various operational systems and merged for management reporting, analysis, and decision making. Why organizations need to bring data together from different working systems? Obviously, the answer is, to be more beneficial, to be more competitive, or to grow by adding value for customers. This can be achieved by mounting the pace and flexibility of decision making, developing business processes effectively, or gaining a clearer idea of customer activities. The data warehouse is a huge collection of the past...
11 Pages(2750 words)Essay

Factors That Could Influence Employee

...? Factors That Could Influence Employee Topic Factors That Could Influence Employee The employee motivation in any organisation guides the performances and helps in achieving the desired organisational goals. There are various factors that motivate the employees both explicitly and implicitly. According to Maslow’s Theory of Motivation, there are different levels of need of an individual and these needs are satisfied by various motivating factors. In the hierarchy of needs, the most basic of all the needs are the physiological needs like hunger, thirst, shelter (Maslow, 1954). Thus the monetary reward is the most important motivating factor for any employee that works in an organisation. Thus the salary is the most basic need...
3 Pages(750 words)Essay

... control on them. Acknowledgements: I would like to give special thanks to for her assistance and my family for their encouragement and support. Key Factors of Leadership Required In the Management of Change Introduction Leadership Defined Leadership is associated with larger-than-life characteristics. It is most important for complex organizations operating in changing environments. One needs to analyze the basic motivations for change because it includes human beings. Timothy Galpin (1996) describes the human elements of change, covering an organization wide area. Healthcare organizations need constant manoeuvring into the future and change. John (1990) states, “Leadership is an ability to influence followers that involves the use...
18 Pages(4500 words)Assignment

... Teacher (dd month yyyy) Identifying Key Community Success Factors The most perfect, ideal community, while it most likely has yet to be achieved, is most often called a "Utopia"; a place where people are considered free citizens and governmental and economic issues are non-existent according to Sir Thomas More and the book he wrote in 1516. The ideal community, or Utopia, is debatable in whether or not it is in fact possible to create and to maintain, however the actual vision of Utopia is different to different people and therefore lacks specific definition. More's Utopia is understandably different from a modern Utopia; just as our general idea of the perfect community will be expectedly different from that of an African native...
4 Pages(1000 words)Essay

The main purpose of these developments was to develop products that could be used in everyday life.
The research involves finding potential problems in the present applications used and resolving them by updating them or using new products. The researchers found the flexibility of a product enables it to be used by more clients. Another important factor probably the most important one is the cost. If the final product is expensive there will be only few takers for it. Therefore research has been done to use cost effective products.
Qualitative research methods are more often used as it involves observation of data that helps in finding solutions to the problems. Qualitative research has been categorised into three categor...
6 Pages(1500 words)Essay

... Key Factors for Successful Projects Introduction The key factors for making projects successful are varied and often depend on the nature of the project as well as the scope and objectives (Meredith & Mantel, 1995). However, there are a few pieces of the puzzle which seem to be mentioned quite frequently in the concerned literature and it seems that things such as leadership, getting the right people, and establishing a good plan become the foundations of all successful projects. To better understand these key factors, it would be useful to analyze them individually as they relate to the success had by a company. Leadership Leadership has many definitions and it seems that there is no real consensus on exactly what comprises leadership...
10 Pages(2500 words)Literature review

The main objective of this article is to explore the various causal factors of implant failure so that repetition can be avoided in the future and success rates increased in this field.
What is a dental implant? A tooth in the natural condition is made up of two major parts. The upper part of the tooth that can be seen above the gum line forms the crown while the anchor that remains below the gum line forms the root. When this tooth is missing completely or is partially broken due to decay or damage, a metal device is so designed that it can replace the root and a prosthetic tooth is prepared to replace the crown above. The process involves the opening of the gum tissue where the bone tissue below it are exposed to drill in...
9 Pages(2250 words)Case Study
sponsored ads
Save Your Time for More Important Things
Let us write or edit the essay on your topic "Different key factors that influence the failure of projects" with a personal 20% discount.
GRAB THE BEST PAPER

Let us find you another Essay on topic Different key factors that influence the failure of projects for FREE!