Comments (0)
Add to wishlistDelete from wishlist
Cite this document
Summary
There are several concepts for the word culture and how to define it has fascinated many anthropologists (O'Neil, p.1; Miller 9). It can refer to an appreciation of art, food, literature and music. Most people use it to refer to "high culture," Shakespeare's Beethoven's symphony, Michelangelo's sculptures, gourmet cooking, imported wines, or maybe even a colony of bacteria for a biologist (Scupin 43)…
Download full paperFile format: .doc, available for editing
HIDE THIS PAPERGRAB THE BEST PAPER93.8% of users find it useful 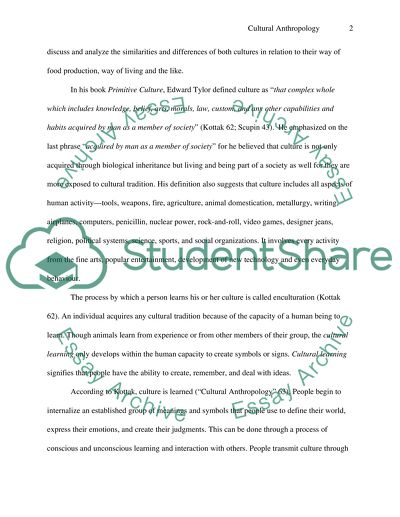 Download file to see previous pages His definition offers a complete overview of the subject matter of anthropology and is widely quoted by many. This essay now defines culture and its characteristics.
People in cultures mostly have the same human cultural traits (O'Neil, p. 5). However, many human beings have different ways of expressing these traits that result from varying cultures and traditions. This essay used to compare the classification of two lifestyle patterns in North American Indian regions': the culture of foragers and the culture of horticulturalists to discuss and analyze the similarities and differences of both cultures in relation to their way of food production, way of living and the like.
In his book Primitive Culture, Edward Tylor defined culture as "that complex whole which includes knowledge, belief, arts, morals, law, custom, and any other capabilities and habits acquired by man as a member of society" (Kottak 62; Scupin 43). He emphasized on the last phrase "acquired by man as a member of society" for he believed that culture is not only acquired through biological inheritance but living and being part of a society as well for they are more exposed to cultural tradition. His definition also suggests that culture includes all aspects of human activity-tools, weapons, fire, agriculture, animal domestication, metallurgy, writing, airplanes, computers, penicillin, nuclear power, rock-and-roll, video games, designer jeans, religion, political systems, science, sports, and social organizations. It involves every activity from the fine arts, popular entertainment, development of new technology and even everyday behaviour.
The process by which a person learns his or her culture is called enculturation (Kottak 62). An individual acquires any cultural tradition because of the capacity of a human being to learn. Though animals learn from experience or from other members of their group, the cultural learning only develops within the human capacity to create symbols or signs. Cultural learning signifies that people have the ability to create, remember, and deal with ideas.
According to Kottak, culture is learned ("Cultural Anthropology" 63). People begin to internalize an established group of meanings and symbols that people use to define their world, express their emotions, and create their judgments. This can be done through a process of conscious and unconscious learning and interaction with others. People transmit culture through observation where most children modify their own behaviour in accordance to what their culture entails as right or wrong or bad or good. Culture is proven to be acquired unconsciously because of the cultural tradition that they do automatically without a direct instruction to maintain them. Anthropologists stated that cultural learning is intricate among humans and though humans differ in their emotional and mental abilities, people can still learn their cultural tradition.
Culture is also shared for it is a quality not only of individuals but of individuals as members of groups as well (Kottak 63). People who grow up in the same culture have shared their beliefs, values, memories, and ...Download file to see next pagesRead More
Share:
Tags
Cite this document
(“Cultural Anthropology Essay Example | Topics and Well Written Essays - 1500 words”, n.d.)
Retrieved from https://studentshare.org/miscellaneous/1502749-cultural-anthropology

CHECK THESE SAMPLES OF Cultural Anthropology

As a function of this, this book proved to be a pivotal and seminal work within the genre of cross-cultural understanding as, even though it was a novel, it helped to open the eyes of many in and around the country as to the unique set of situations that individuals experienced as a function of not only being bi-racial and living in a juxtaposition of two alternate societies but attempting to draw a sense of personal identity between the two and forging a third as a result. Furthermore, although not the express intent of the book, the issues of assimilation and the firm choice that the second generation immigrant must make between the culture of their parents and the unique aspects of the culture that they have been raised into.
sponsored ads
Save Your Time for More Important Things
Let us write or edit the essay on your topic "Cultural Anthropology" with a personal 20% discount.
GRAB THE BEST PAPER

Let us find you another Essay on topic Cultural Anthropology for FREE!