Comments (0)
Add to wishlistDelete from wishlist
Cite this document
Summary
In their book Beckwith and Geisler (1991) present contrasting and intriguing viewpoint about the right to live focusing on abortion and the right to die - concentrating on euthanasia. Both authors have a long and profound interest in this perspective and in cooperation with other scholars have published various books dealing with similar biting topics…
Download full paperFile format: .doc, available for editing
HIDE THIS PAPERGRAB THE BEST PAPER97.8% of users find it useful 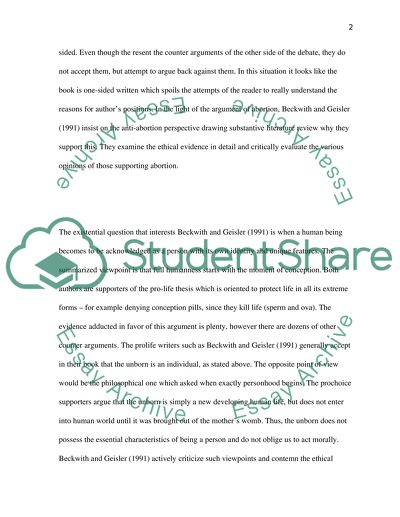 Extract of sample "Matters of Life and Death"

Download file to see previous pages Filling the knowledge gap is challenging, since there are serious controversies involved and both for and against argumentation have to be addressed.
The abortion theme is a complicated moral dilemma with social, medical, psychological and even political dimensions. Beckwith and Geisler (1991) try to argue in favor of the ethical considerations involved. What they are trying to communicate in their book is that there are intrinsic ethical issues at stake which can not be overjumped. Therefore, it is necessary to clarify the ambivalence of abortion and this is what the authors are doing. They outline the basic line of anti-abortion argument which characterized their respective positions. It appears to me that the method of argumentation that Beckwith and Geisler (1991) apply is rather one-sided. Even though the resent the counter arguments of the other side of the debate, they do not accept them, but attempt to argue back against them. In this situation it looks like the book is one-sided written which spoils the attempts of the reader to really understand the reasons for author's positions. In the light of the argument of abortion, Beckwith and Geisler (1991) insist on the anti-abortion perspective drawing substantive literature review why they support this. They examine the ethical evidence in detail and critically evaluate the various opinions of those supporting abortion.
The existential question that interests Beckwith and Geisler (1991) is when a human being becomes to be acknowledged as a person with its own identity and unique features. The summarized viewpoint is that full humanness starts with the moment of conception. Both authors are supporters of the pro-life thesis which is oriented to protect life in all its extreme forms - for example denying conception pills, since they kill life (sperm and ova). The evidence adducted in favor of this argument is plenty, however there are dozens of other counter arguments. The prolife writers such as Beckwith and Geisler (1991) generally accept in their book that the unborn is an individual, as stated above. The opposite point of view would be the philosophical one which asked when exactly personhood begins. The prochoice supporters argue that the unborn is simply a new developing human life, but does not enter into human world until it was brought out of the mother's womb. Thus, the unborn does not possess the essential characteristics of being a person and do not oblige us to act morally. Beckwith and Geisler (1991) actively criticize such viewpoints and contemn the ethical
concerns which could not be applied prior human birth. Our actions towards life should protect the unborn and classify his status as a "person". Early human life has a certain value and this is what Beckwith and Geisler (1991) try to communicate to their readers. Though, prochoice followers claim that the value of the preborn at the moment of conception equals zero and the value of mother prevails, until at least the delivery.
Major (1989) agrees with Beckwith and Geisler (1991) that many modern societies and their members nowadays decide affirmatively upon that quality of life is more ...Download file to see next pagesRead More
Share:
Tags
Cite this document
(“Matters of Life and Death Book Report/Review Example | Topics and Well Written Essays - 2250 words”, n.d.)
Matters of Life and Death Book Report/Review Example | Topics and Well Written Essays - 2250 words. Retrieved from https://studentshare.org/miscellaneous/1502639-matters-of-life-and-death

CHECK THESE SAMPLES OF Matters of Life and Death

The play goes ahead to question whether kings do possess a heaven’s free pass. The theme of death in Shakespeare’s Hamlet, therefore, has an influence on the lives of living human beings (Bloom 45).
In Hamlet’s mind, the idea of death did not seem awful. However, despite the fact that he became obsessed with the notion, the afterlife uncertainty frightened Hamlet from committing suicide. Hamlet’s turning point took place at the scene of the graveyard in the fifth act of the play. It was before Hamlet became revolted and shocked by the living’s moral corruption. However, when he saw the skull of Yorick whom he loved and respected propelling, he realized that death does eliminate the differences th...
8 Pages(2000 words)Literature review
sponsored ads
Save Your Time for More Important Things
Let us write or edit the book report/review on your topic "Matters of Life and Death" with a personal 20% discount.
GRAB THE BEST PAPER

Let us find you another Book Report/Review on topic Matters of Life and Death for FREE!