Comments (0)
Add to wishlistDelete from wishlist
Cite this document
Summary
The Goethals Bridge replacement project has gone through several reviews as of now and its initial draft process as per Environmental Impact statement is as follows. Initially the permit for replacement is obtained followed with a notification to all the affiliated consents…
Download full paperFile format: .doc, available for editing
HIDE THIS PAPERGRAB THE BEST PAPER95.7% of users find it useful 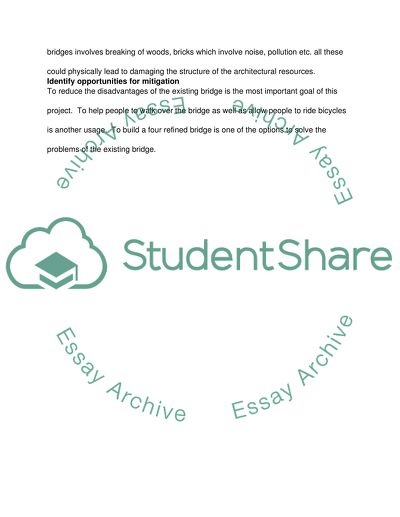 Explain the most likely path that the project will take through the review process The Goethals Bridge replacement project has gone through several reviews as of now and its initial draft process as per Environmental Impact statement is as follows. Initially the permit for replacement is obtained followed with a notification to all the affiliated consents. Once this is done, a public scope of entire requirements is brought about. After this, alternative analyses, the changes impact on environment is all analyzed and the design options are listed out. Once the draft of this prepared, a public hearing of this draft and is sent for review from different quarters. Once the reviews are a finalized, a final draft of the plan document is proposed.
Identify possible alternatives
Possible alternatives include rehabilitating the surrounding environment of the bridge so that no harm is done; a bridge built to south of the existing bridge and destroying the current bridge; implementing toll booths in the most traffic times or peak hours so that traffic could be minimalised with high toll rates; Usage of transit based options that would help reducing the same congestion during the peak hours.
Identify possible actions involved in the project, attributes that could be logically impacted by each action, and explain , physically, how the action impacts the attribute
Actions involve building a bridge in the south direction to Goethals bridge; building a bridge in the north direction aligned to Goethals bridge; in addition to this another action is to extend the now present Goethals bridge in north and south direction by building single bridges. These actions impact logically as well as physically the historical artifacts of the surrounding areas. The proposed actions could logically alter the visual view of the subjective resource or it may change the entire texture. Physically, the building up of bridges involves breaking of woods, bricks which involve noise, pollution etc. all these could physically lead to damaging the structure of the architectural resources.
Identify opportunities for mitigation
To reduce the disadvantages of the existing bridge is the most important goal of this project. To help people to walk over the bridge as well as allow people to ride bicycles is another usage. To build a four refined bridge is one of the options to solve the problems of the existing bridge. Read More
Share:
Tags
Cite this document
(“Goethals Bridge Replacement Project Assignment Example | Topics and Well Written Essays - 500 words”, n.d.)
Retrieved de https://studentshare.org/miscellaneous/1502497-goethals-bridge-replacement-project

Another important purpose of this case is to focus on the plans established by me for maximum utilization of the resources of the hospital in such a way which will help to achieve the goals of the organization.
I would determine the requirement of the staff of the food service department by evaluating the ratio of patients and staff. More patients require for delivering effective service. Ineffective service of the food department determines the requirement of the staff. For improving the quality of service I would require more new staff (McClay).
As a manager, I would maintain different levels like food production, service delivery, quality testing, etc in the food department of the hospital. From food production to con...
10 Pages(2500 words)Case Study
sponsored ads
Save Your Time for More Important Things
Let us write or edit the assignment on your topic "Goethals Bridge Replacement Project" with a personal 20% discount.
GRAB THE BEST PAPER

Let us find you another Assignment on topic Goethals Bridge Replacement Project for FREE!