Comments (0)
Add to wishlistDelete from wishlist
Cite this document
Summary
Gender identity" is widely used to describe the gender with which a person identifies him or herself. In other words, gender identity relates to the perception of oneself whether one perceives oneself to be a man, a woman, or describes oneself in some less conventional way…
Download full paperFile format: .doc, available for editing
HIDE THIS PAPERGRAB THE BEST PAPER99% of users find it useful 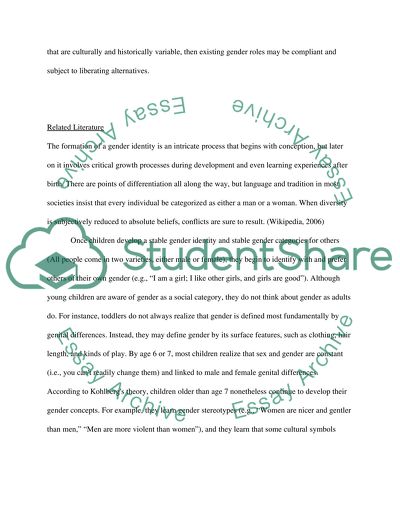 Extract of sample "Gender and Identity"

Download file to see previous pages It has been observed that gender identity critics' focal point is reflecting the others who are the contributors; whereas, to understand gender identity, it is imperative to look at all the social and biological aspects. Moreover, gender identity may be influenced by a number of social structures, including the person's ethnic group, employment status, religion or irreligion, and family etc.
Research on masculinity and femininity has a long, complex, and controversial history. This may be due in part to the questions addressed. Often researchers ask questions whether masculinity and femininity really exist, and if it does, how are they best defined and measured The argument carried forward in this paper is the question of what molds and determines a person's degree of masculinity and femininity, whether biological factors or social factors
Because the roles of men and women have been the subject of passionate debate in recent years, it's no wonder that research on masculinity and femininity has become embroiled in the debate. If masculinity and femininity are real traits, perhaps even genetically determined to a significant extent, then gender would seem to be partly inflicted into our personalities. On the other hand, if masculinity and femininity are social constructions, learned patterns of behavior that are culturally and historically variable, then existing gender roles may be compliant and subject to liberating alternatives.
Related Literature
The formation of a gender identity is an intricate process that begins with conception, but later on it involves critical growth processes during development and even learning experiences after birth. There are points of differentiation all along the way, but language and tradition in most societies insist that every individual be categorized as either a man or a woman. When diversity is subjectively reduced to absolute beliefs, conflicts are sure to result. (Wikipedia, 2006)
Once children develop a stable gender identity and stable gender categories for others (All people come in two varieties, either male or female), they begin to identify with and prefer others of their own gender (e.g., "I am a girl; I like other girls, and girls are good"). Although young children are aware of gender as a social category, they do not think about gender as adults do. For instance, toddlers do not always realize that gender is defined most fundamentally by genital differences. Instead, they may define gender by its surface features, such as clothing, hair length, and kinds of play. By age 6 or 7, most children realize that sex and gender are constant (i.e., you can't readily change them) and linked to male and female genital differences. According to Kohlberg's theory, children older than age 7 nonetheless continue to develop their gender concepts. For example, they learn gender stereotypes (e.g., "Women are nicer and gentler than men," "Men are more violent than women"), and they learn that some cultural symbols (e.g., butterflies and flowers) are more associated with girls, whereas others (e.g., worms and frogs) are more associated with boys. (Kohlberg, 1966)
A question arises at this point, should research on gender differences promote inequality between the genders Not necessarily. Even if there are actual differences between men and women, this does not need to imply that one gender is better than the other. Psychologist Diane Halpern notes that although no one would deny that female ...Download file to see next pagesRead More
Share:
Tags
Cite this document
(“Gender and Identity Essay Example | Topics and Well Written Essays - 2000 words”, n.d.)
Retrieved from https://studentshare.org/miscellaneous/1502340-gender-and-identity

CHECK THESE SAMPLES OF Gender and Identity

However, whether to fulfill basic needs or for prestige, what people buy usually make a statement about them and the sense of identity they have found themselves in. A consumer’s sense of identity will place them in a certain class based on their social power. Their possessions relate to the way they define themselves and how they are perceived by society and this paper will argue that people buy things they feel represent their identities and class.
Purchases motivated by class serve purposes related to personal enrichment and, more importantly, self-esteem. The social class concept introduced to marketing literature shows that the real or perceived social class in which a person belongs will influence the type of good...
6 Pages(1500 words)Assignment
sponsored ads
Save Your Time for More Important Things
Let us write or edit the essay on your topic "Gender and Identity" with a personal 20% discount.
GRAB THE BEST PAPER

Let us find you another Essay on topic Gender and Identity for FREE!