Comments (0)
Add to wishlistDelete from wishlist
Cite this document
Summary
There is necessity in first discussing the politics of the United Kingdom and its government before going into (a) the evaluation of the roles of the nation's legislature and judicial arm, and (b) the relevance of the so-called implied repeal. The structure of the United Kingdom is very unique in that it is a monarchy founded on constitutional frameworks…
Download full paperFile format: .doc, available for editing
HIDE THIS PAPERGRAB THE BEST PAPER97.8% of users find it useful 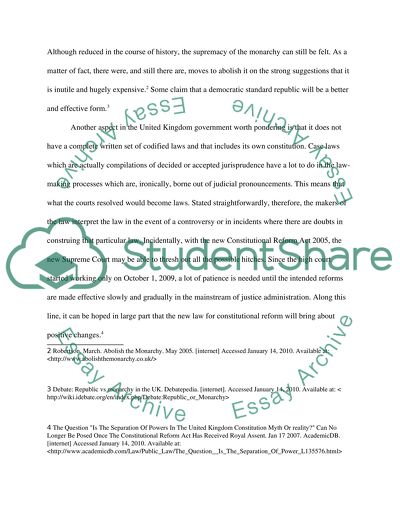 Download file to see previous pages This drawback was recently remedied substantially, albeit not completely, by the Constitutional Reform Act 2005.1 For instance, there is now a Supreme Court under Part 3 of the law which has taken over the judicial powers of the House of Lords which used to have appellate jurisdiction. Being then all under the Queen, the rule of law was said to be hinged on her sovereignty in the parliament which makes laws and on her sovereignty in the courts which interpret and apply the law. From within this ambit was derived the structure of the so-called twin foundations. While it is true that the duties and functions of the Queen are more ceremonial, there are still aspects over which she wields power which she may exercise at will. Important examples are her needed assent for the final enactment of a bill into law and her influence over the appointment of the Prime Minister and the other members of the cabinet because of the need for the Queen's formal consent. Although reduced in the course of history, the supremacy of the monarchy can still be felt. As a matter of fact, there were, and still there are, moves to abolish it on the strong suggestions that it is inutile and hugely expensive.2 Some claim that a democratic standard republic will be a better and effective form.3
Another aspect in the United Kingdom government worth pondering is that it does not have a complete written set of codified laws and that includes its own constitution. Case laws which are actually compilations of decided or accepted jurisprudence have a lot to do in the law-making processes which are, ironically, borne out of judicial pronouncements. This means that what the courts resolved would become laws. Stated straightforwardly, therefore, the makers of the law interpret the law in the event of a controversy or in incidents where there are doubts in construing that particular law. Incidentally, with the new Constitutional Reform Act 2005, the new Supreme Court may be able to thresh out all the possible hitches. Since the high court started working only on October 1, 2009, a lot of patience is needed until the intended reforms are made effective slowly and gradually in the mainstream of justice administration. Along this line, it can be hoped in large part that the new law for constitutional reform will bring about positive changes.4
The twin foundations of the Queen's sovereignty
During one of the deliberations of the constitutional reform bill, the Law Lords had the occasion to mention the ruling in X v Morgan Gramplan (Publishers) Ltd. which enunciated the principle that the rule of law in the United Kingdom is founded on both the Queen's sovereignty in the parliament which is charged with the enactment of laws and the Queen's sovereignty over judicial proceedings particularly those administered by the House of Lords in its duties anent appellate jurisdiction.5 It has always been debated if the somewhat irregular or abnormal circumstance contradicts the precepts on separation of powers. It is like taking exceptions on one person being the prosecutor, the judge and the executioner. The notion has a direct correlation with the ...Download file to see next pagesRead More
Share:
Tags
Cite this document
(“Rule of Law - UK law Essay Example | Topics and Well Written Essays - 1500 words”, n.d.)
Rule of Law - UK law Essay Example | Topics and Well Written Essays - 1500 words. Retrieved from https://studentshare.org/miscellaneous/1502325-rule-of-law-uk-law

CHECK THESE SAMPLES OF Rule of Law - UK law

Let us find you another Essay on topic Rule of Law - UK law for FREE!