Comments (0)
Add to wishlistDelete from wishlist
Cite this document
Summary
Despite the fact that human behavior is as old as the creation of man itself, however, a refined and exclusive branch of study in this realm wasn't available until only 100 years ago…
Download full paperFile format: .doc, available for editing
HIDE THIS PAPERGRAB THE BEST PAPER96.6% of users find it useful 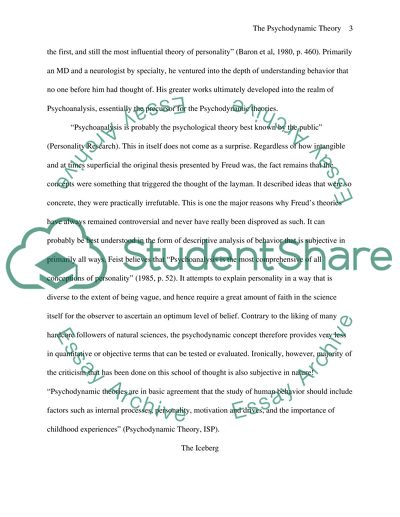 Extract of sample "The psychodynamic theory"

Download file to see previous pages Before this, behavior was studied as an offshoot of multiple sciences and Para-sciences, including physiology, neurology, philosophy, astrology, astronomy, etc. The dynamics of human behavior have always been so complex to be analyzed, that a simple science never vowed to enter this particular domain. However, gradually but surely, the psychodynamic model explained concepts that were novel to this science, and in its purest form, gave rise to the science that is now known as Psychology. This feat alone, is by far the greatest achievement of this school of thought. For once, such theories were given, that had no medical or theological connotation to them - they were purely related to the behavioral context of humans."The term psychodynamic refers to a wide group of theories that emphasize the overriding influence of instinctive drives and forces, and the importance of developmental experiences in shaping personality" (Psychodynamic Theory, ISP). These are an amalgamation of theories in a school of thought, that gave rise to ideas and concepts that are and shall be responsible for the most intricate and in depth theories of personality to date. The primary works are the brain child of the infamous Sigmund Freud. Wittig states that, "Psychodynamic Theory was developed from Freud's attempts to design therapeutic techniques" (2002, p. 113). His genius gave rise to the most prominent and controversial theories of Psychology. "Freud created the first, and still the most influential theory of personality" (Baron et al, 1980, p. 460). Primarily an MD and a neurologist by specialty, he ventured into the depth of understanding behavior that no one before him had thought of. His greater works ultimately developed into the realm of Psychoanalysis, essentially the precursor for the Psychodynamic theories.
"Psychoanalysis is probably the psychological theory best known by the public" (Personality Research). This in itself does not come as a surprise. Regardless of how intangible and at times superficial the original thesis presented by Freud was, the fact remains that the concepts were something that triggered the thought of the layman. It described ideas that were so concrete, they were practically irrefutable. This is one the major reasons why Freud's theories have always remained controversial and never have really been disproved as such. It can probably be best understood in the form of descriptive analysis of behavior that is subjective in primarily all ways. Feist believes that "Psychoanalysis is the most comprehensive of all conceptions of personality" (1985, p. 52). It attempts to explain personality in a way that is diverse to the extent of being vague, and hence require a great amount of faith in the science itself for the observer to ascertain an optimum level of belief. Contrary to the liking of many hardcore followers of natural sciences, the psychodynamic concept therefore provides very less in quantitative or objective terms that can be tested or evaluated. Ironically, however, majority of the criticism that has been done on this school of thought is also subjective in nature! "Psychodynamic theories are in basic agreement that the study of human behavior should include factors such as internal processes, personality, motivation and drives, and the importance of childhood experiences" (Psychodynamic Theory, ISP).
The Iceberg
Introduction of the world with the word 'unconscious' is one fact alone that can pardon all sins for the Psychodynamic school of thought. Literally, every psychologist now ...Download file to see next pagesRead More
Share:
Tags
Cite this document
(“The psychodynamic theory Book Report/Review Example | Topics and Well Written Essays - 2500 words”, n.d.)
The psychodynamic theory Book Report/Review Example | Topics and Well Written Essays - 2500 words. Retrieved from https://studentshare.org/miscellaneous/1501915-a-critical-review-of-the-psychodynamic-theory

CHECK THESE SAMPLES OF The psychodynamic theory

...The Psychodynamic Theory The psychodynamic theory is one that sets out to explain the origins of personality with the most popular theory being postulated by neurologist Sigmund Freud. Psychodynamic theory centers around the concept that “human behavior and relationships are shaped by conscious and unconscious influences (Taylor, 2011).” Freud took on the task of pinpointing the various unconscious aspects of human beings that are involved in the shaping of behavior and relationships, such as the characteristics of the structure of personality and defense mechanisms that the personality resorts to when faced with stress and anxiety. According to Freud, the structure of personality consists of three components, which are the id, ego...
2 Pages(500 words)Term Paper

...Management Theory and Practice in the early childhood education industry This Report applies management theory into practice in the early childhood industry, especially in the context of women leaders. Management issues play a significant role in the academic sector, because early childhood professionals need higher levels of motivation in order to avoid burnout . As pointed out in a study by Osgood and Halsall (2007) where they carried out research to examine the position of women in leadership or management positions, a “glass ceiling” exists for women in the academic setting, which could significantly impair motivation. Since many of the individuals employed in the early education sector are women, addressing this issue is even more...
6 Pages(1500 words)Coursework
sponsored ads
Save Your Time for More Important Things
Let us write or edit the book report/review on your topic "The psychodynamic theory" with a personal 20% discount.
GRAB THE BEST PAPER

Let us find you another Book Report/Review on topic The psychodynamic theory for FREE!