Comments (0)
Add to wishlistDelete from wishlist
Cite this document
Summary
The psychodynamic theory is one that sets out to explain the origins of personality with the most popular theory being postulated by neurologist Sigmund Freud. Psychodynamic theory centers around the concept that “human behavior and relationships are shaped by conscious and…
Download full paperFile format: .doc, available for editing
HIDE THIS PAPERGRAB THE BEST PAPER91.3% of users find it useful 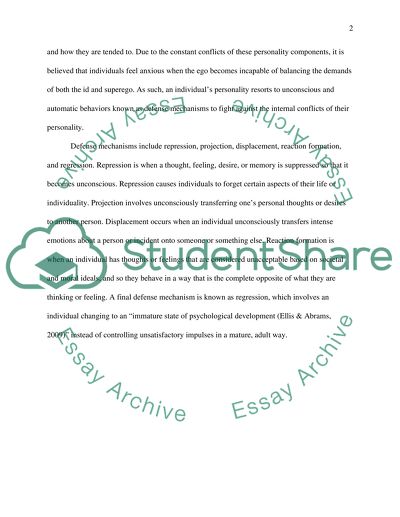 The Psychodynamic Theory The psychodynamic theory is one that sets out to explain the origins of personality with the most popular theory being postulated by neurologist Sigmund Freud. Psychodynamic theory centers around the concept that “human behavior and relationships are shaped by conscious and unconscious influences (Taylor, 2011).” Freud took on the task of pinpointing the various unconscious aspects of human beings that are involved in the shaping of behavior and relationships, such as the characteristics of the structure of personality and defense mechanisms that the personality resorts to when faced with stress and anxiety.
According to Freud, the structure of personality consists of three components, which are the id, ego, and superego. The id is in control of instincts that are related to survival and aggression, biological urges, and the need to seek pleasure, which is referred to as the pleasure principle. The id, being illogical, irrational, and driven by impulses, is distinguished by primary process thinking. The second component of personality is the logical and rational ego, which is characterized by secondary process thinking. The reality principle plays a role in the ego’s functions, making it aware that appeasing to impulses cannot always occur due to the demands of the real world. As such, the ego “manages the conflict between the id and the constraints of the real world (Freud, 2010).” The final component is the superego, which is the part of the personality that maintains the moral standards adapted from society and family. The superego is the purveyor of guilt and forces the ego to adapt to the real world and to concepts of morality.
Given the complex structure of personality, Freud noted that the id, ego, and superego are in permanent conflict with one another. Freud claimed that these conflicts most likely dealt with sexual urges and aggressiveness as society has rules surrounding these urges, their prevalence, and how they are tended to. Due to the constant conflicts of these personality components, it is believed that individuals feel anxious when the ego becomes incapable of balancing the demands of both the id and superego. As such, an individual’s personality resorts to unconscious and automatic behaviors known as defense mechanisms to fight against the internal conflicts of their personality.
Defense mechanisms include repression, projection, displacement, reaction formation, and regression. Repression is when a thought, feeling, desire, or memory is suppressed so that it becomes unconscious. Repression causes individuals to forget certain aspects of their life or individuality. Projection involves unconsciously transferring one’s personal thoughts or desires to another person. Displacement occurs when an individual unconsciously transfers intense emotions about a person or incident onto someone or something else. Reaction formation is when an individual has thoughts or feelings that are considered unacceptable based on societal and moral ideals, and so they behave in a way that is the complete opposite of what they are thinking or feeling. A final defense mechanism is known as regression, which involves an individual changing to an “immature state of psychological development (Ellis & Abrams, 2009)” instead of controlling unsatisfactory impulses in a mature, adult way.
References
Ellis, A., & Abrams, L. (2009). Personality theories: Critical perspectives. Los Angeles: SAGE Publications.
Freud, S. (2010). The ego and the id. LaVergne, TN: Pacific Publishing Studio.
Taylor, E. (2011). The mysteries of personality: A history of psychodynamic theories. New York: Springer-Verlag New York, LLC. Read More
Share:
Tags
Cite this document
(“The Psychodynamic Theory PS240 WK6 Term Paper Example | Topics and Well Written Essays - 500 words”, n.d.)
Retrieved from https://studentshare.org/miscellaneous/1600440-the-psychodynamic-theory-ps240-wk6

CHECK THESE SAMPLES OF The Psychodynamic Theory PS240 WK6

...? False memories Introduction False memory basically refers to cases in which an individual’s recall of an event is different from the way it happened or perhaps in a more extreme case, the individual remembers events that never happened at all. The nature of false memories is such that it can be very vivid and held in high confidence. This makes it increasingly difficult to convince a person that the memory in question is wrong (Roediger and Marsh, 2009). However Loftus’s take pertaining to false memories is clearly different; She defines memories as precious and significant contributors to an individual’s identity. They are responsible for the creation of bonds with other human beings due to a shared past. Memories might seem... False...
14 Pages(3500 words)Essay

...A Critical Review of The Psychodynamic Theory Full A Critical Review of The Psychodynamic Theory The shape that contemporary Psychology sees itself in today is largely a result of the contributions made by the Psychodynamic school of thought. Interestingly, despite the fact that human behavior is as old as the creation of man itself, however, a refined and exclusive branch of study in this realm wasn't available until only 100 years ago. Before this, behavior was studied as an offshoot of multiple sciences and Para-sciences, including physiology, neurology, philosophy, astrology, astronomy, etc. The dynamics of human behavior have always been so complex...
10 Pages(2500 words)Book Report/Review

...Jung’s Neo Psychodynamic Theory A. of the Condition Phobia originated from the Greek word “phobos”, which means fear (MedicinNet.com 2000). It is a condition that manifest into an anxiety or dread of something in particular that is commonly difficult for an individual experiencing the fear to deal with (MedicineNet.com 2000). Therapists and psychiatrists characterize phobia as an “anxiety disorder” which projects illogical fear of a certain circumstance or particular object that gives rise to relentless anxiety, which in most situations are irrational or needless (Phobia Variations Defined and Explained, n.d.). There are two main types of phobias, which are as follows: 1) specific phobia and 2) the...
10 Pages(2500 words)Essay

..., there are many studies that use behavioral techniques to assist in many mental disorders. Some critics think that this therapy does not go far enough in helping clients because it does not provide insights for the client and it ignores the relationship between the client and the therapist. Behaviorists also put emphasis on ethical accountability. In contrast rational emotive behavior therapy (REBT) expands upon what the behavior therapists does by bringing in a cognitive component. The basic premise of this therapy is that an individual is very capable of healing themselves because they are naturally inclined to do "self-talking, self-evaluating and self-sustaining" (Corey, p. 273). This theory grew out of work by...
2 Pages(500 words)Essay

...MEMORY: REPRESENTATION AND MANIPULATION OF KNOWLEDGE Memory: Representation and Manipulation of Knowledge Zea S. Santiago Manila, Philippines MEMORY: REPRESENTATION AND MANIPULATION OF KNOWLEDGE 2 Abstract One’s memory can be represented using visual codes and verbal codes. Coding preference is under the discretion of an individual. He might be comfortable in using visual coding and mental imagery, versus verbal coding and explanation. He might be more functional in using one of these ways, so he might as well stick to it most of the time. Either way, the one which is more appealing to him may be his choice all throughout his lifetime. No one hinders someone from making decisions like this because each of us is unique... REPRESENTATIO...
2 Pages(500 words)Essay

...Does this theory address what it says it does?  Sigmund Freud developed his theory of personality to explain the manner in which personality developed as the individual grew up; and the factors that could encourage or restrict the development of personality. Freud was interested in providing an explanation for how the interaction of internal and external factors led to the development of healthy or unhealthy personality characteristics. The Psychodynamic theory does explain how the personality of an individual develops through the developmental years (Approaches to Psychology, 2009); and describes the factors that can affect the manner in which it develops. It provides an...
2 Pages(500 words)Assignment

Choose an artifact from contemporary culture that you find interesting, compelling, problematic, or suggestivein short, an artifact that you find worth thinking about a little more deeply. This could be a novel, short story, play, childrens book, po

...Psychodynamic theory debate – 405 Psychodynamic theory debate – 405 In the thought of psychoanalysts, an individual’s personality is determined by real and imagined relationships. As Freud argues, the personality of individuals in adults particularly results from the experiences that they have experienced in their childhood (Schultz & Schultz, 2012). However, Freud focuses on the unconscious person and their contribution to an individual’s personality. Valerie & Peter (2003) indicate that Freud described human’s instincts being innate though they are universal and felt at all times. Freud also believes that interactions with other persons are the basis of satisfying instincts. In regard to interpersonal relations in personality... to manage...
1 Pages(250 words)Assignment
sponsored ads
Save Your Time for More Important Things
Let us write or edit the term paper on your topic "The Psychodynamic Theory PS240 WK6" with a personal 20% discount.
GRAB THE BEST PAPER

Let us find you another Term Paper on topic The Psychodynamic Theory PS240 WK6 for FREE!