Comments (0)
Add to wishlistDelete from wishlist
Cite this document
Summary
Let us look at the case of Beren first. Chapter 7 is considered to be a powerful tool while dealing with heavy debts. But it is not for everyone. The following are some of the situations in which a person can or cannot file for Chapter 7 bankruptcy. If a person is having enough income to fund a Chapter 13 repayment plan then he/she is not eligible…
Download full paperFile format: .doc, available for editing
HIDE THIS PAPERGRAB THE BEST PAPER95.3% of users find it useful 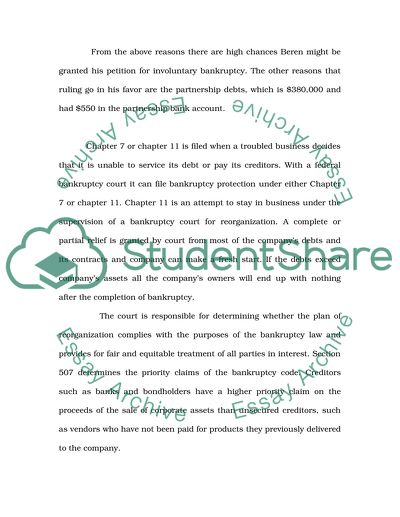 Extract of sample "Bankruptcy and Reorganization"

BANKRUPTCY AND REORGANISATION Let us look at the case of Beren first. Chapter 7 is considered to be a powerful tool while dealing with heavy debts. But it is not for everyone. The following are some of the situations in which a person can or cannot file for Chapter 7 bankruptcy. If a person is having enough income to fund a Chapter 13 repayment plan then he/she is not eligible. The people whose debts come mainly from business are eligible for Chapter 7.
If disabled veteran's debts were incurred on active duty then they are eligible for Chapter 7.
If a person's income is less than or equal to the median income of his state then he is eligible for Chapter 7. If it is above then he has to pass the means test. Calculate the current monthly income and see if the total monthly disposable income is less than the $100 then the person passes the means test and he is eligible for Chapter 7. If the remaining disposable monthly income is more than $166.66 then the person won't the means test and he is not eligible for Chapter 7.
A person cannot file for Chapter 7 if a previous Chapter 7 or Chapter 13 was dismissed within the last 180 days. The reason for this is the person might have violated the court, the court ruled his filing is fraud or constituted an abuse of the bankruptcy system.
From the above reasons there are high chances Beren might be granted his petition for involuntary bankruptcy. The other reasons that ruling go in his favor are the partnership debts, which is $380,000 and had $550 in the partnership bank account.

Chapter 7 or chapter 11 is filed when a troubled business decides that it is unable to service its debt or pay its creditors. With a federal bankruptcy court it can file bankruptcy protection under either Chapter 7 or chapter 11. Chapter 11 is an attempt to stay in business under the supervision of a bankruptcy court for reorganization. A complete or partial relief is granted by court from most of the company's debts and its contracts and company can make a fresh start. If the debts exceed company's assets all the company's owners will end up with nothing after the completion of bankruptcy.
The court is responsible for determining whether the plan of reorganization complies with the purposes of the bankruptcy law and provides for fair and equitable treatment of all parties in interest. Section 507 determines the priority claims of the bankruptcy code. Creditors such as banks and bondholders have a higher priority claim on the proceeds of the sale of corporate assets than unsecured creditors, such as vendors who have not been paid for products they previously delivered to the company.
There are two possibilities for question 2. The court will grant a motion to convert to Chapter 7 or appoint a trustee if either of these actions is in the best interest of all creditors or if no plan of reorganization is approved by the court then the court may either convert the case to a liquidation under Chapter 7.

CHECK THESE SAMPLES OF Bankruptcy and Reorganization

...Overview: The paper identifies the extended somatosensory localization of the modality specific points on the face in the issue of phantom pain, taking the consideration of 3 amputed humans. The study is on perceptual correlates of massive cortical reorganization corresponding to the changes observed in physiological studies. According to the physiological relation of Arm and face, the study was carried on some somatosensory points. Though the other researches of Dr.Ramachandran observed the modalities of ‘pain’ and ‘kinesthetics’, the present abstract illustrates the research on ‘touch’ and ‘temperature’. The study observes the localization of these somaotosensory experiences on specific parts of the body. These are called reference...
3 Pages(750 words)Essay

Analysis of a Bankruptcy for a Firm

...﻿Analysis of a Bankruptcy for a Firm Introduction: Bankruptcy for a firm is its inability to meet its contractual commitments (Damodaran A., 2008). Good corporate finance recommends a certain amount of debt in its capital structure. The two most important factors in a bankruptcy are the extent by which a firm’s debt exceeds its assets, and its inability to pay its debt as it comes due. Even firms with no debt can go bankrupt if they are unable to pay salaries to their employees, or they do not have enough working capital for their operations. Bankruptcy of a company can have far reaching implications for its creditors, suppliers, Government, and all other stakeholders related to it. As a result of this it becomes imperative to predict...
4 Pages(1000 words)Essay

... Creditor’s Right and Bankruptcy Bankruptcy, debtors, creditors etc are some common terms associated with business. Bankruptcy cases occur when a person or organization fail to run their business positively and may suffer huge losses. In such cases, the entrepreneur or the organization (debtor) may try to file bankruptcy suits in order to escape from the immediate threats from the creditors. Some of the bankruptcy cases might be real ones whereas some others might be fabricated or fake ones. In any case, the ultimate sufferer would be the creditors. Most of the creditors have the illusion that once the debtor files a bankruptcy suit, their hope to recover money would be vanished. But creditors have certain rights in bankruptcy claims...
6 Pages(1500 words)Term Paper

...Essay What were the major reforms made to federal bankruptcy laws in 2005? The Bankruptcy Abuse Prevention and Consumer Protection Act of 2005 have introduced major changes in the debtor-creditor relations. The section 106 of the Act makes it necessary for those who are to submit a petition under Liquidation (chapter 7) or wage earner plan (chapter 13) to have received credit counseling from those who have been approved by the Bankruptcy trustee which would essentially brief the petitioner about the alternatives and economic issues related to bankruptcy. Section 102 of the Act also requires the attorneys representing the petitioner to have conducted a formal enquiry before filing the claim. Section 316 of the Act requires the creditors...
2 Pages(500 words)Essay

Medical Bankruptcy in the United States

...﻿Annotated Bibliography Summary The issue at hand is the cost of healthcare in the United States which has sky rocketed in the past few years. In America, the high cost of health care has resulted into a great financial strain upon numerous household compared to other industrialized countries around the globe. Un-conflicting information can be traced to indicate that due to high medical expenses there is also a rise of bankruptcy amongst many citizens. Zuckerman, Mortimer. “The high cost of staying well.” US News and World Report. 18th March (2013). Viewed 18th March 2014. Zuckerman reveals that Americans incur a high cost in order to stay well. According to Zuckerman, Americans are paying more currently in order to access medical...
1 Pages(250 words)Annotated Bibliography

...﻿Bankruptcy in Lehman Brothers Lehman Brothers, a 150 year old global investment bank shocked many people world wide, when the organization declared bankruptcy in September 2008.The firm, which was the fourth largest investment bank in the United States employed over 27,000 people by the time of bankruptcy. Their core businesses involved trading fixed income assets, research, investment management and private equity. In this regard, the firm provided financial services to corporations, governments, institutions and wealthy individuals globally. The collapse of Lehman Brothers has put the huge work force out of work, wiping out billions of dollars in personal net worth, and an estimated $600 billion loss in stock market value worldwide...
8 Pages(2000 words)Case Study

...﻿ Fear of Debtors Filing for Bankruptcy Introduction Bankruptcy has never been associated with a good outcome as most people will assume it is a period that one suffers from anguish and also from the stigma associated with one not having enough money. In this paper I examine the process of bankruptcy and some of the details that one ought to know on the issues surrounding the whole procedure of filing for bankruptcy. Furthermore I tackle the issues concerning the reasons why most debtors fear filing for bankruptcy and their thoughts and impression of what it entails to file for bankruptcy. To achieve this research, I have split my paper into two sections where I first define what bankruptcy is with an example and the second part...
6 Pages(1500 words)Research Paper

... International Bankruptcy International studying in the United s face a number of challenges, some of which have an enormous impact on their academic performance. One of the problems that international students face include financial problems. Students who fail to get financial aid experience financial challenges since there are high tuition fees that they have to pay, as well as high expenses in the United States compared to their home country. In addition, the fees for international students may not be subsidized by the government as is the case for local students. The disparities between the exchange rates of the United States dollar and the currencies of the respective countries from where the students come from also contributes...
6 Pages(1500 words)Essay

Bankruptcy due to Poor Management

... needs to evolve. Since 2016, NFL ratings and viewership have dropped considerably. It has been reported that fans who used to be serious viewers have taken a more casual approach and the few who still stream the games do not watch them to the end. The dropped ratings negatively affect the revenues received by the organization as advertisers pay good money for huge ratings. One way of dealing with the reduced numbers is to lower the number of Thursday Night Football games. The Increased number of games have created a burn out among fans. The protests being experienced should not be aired but should simply be reported. Many fans are opposed to the politicizing of the games. Toys-R-Us. Toys "R" Us was forced to file for bankruptcy after...
6 Pages(1500 words)Case Study
sponsored ads
Save Your Time for More Important Things
Let us write or edit the essay on your topic "Bankruptcy and Reorganization" with a personal 20% discount.
GRAB THE BEST PAPER

Let us find you another Essay on topic Bankruptcy and Reorganization for FREE!