Comments (0)
Add to wishlistDelete from wishlist
Cite this document
Summary
New York City is the world's leading financial district as it is home to many financial institutions that conduct business worldwide. Behind this elegant faade, however, is the proliferation of another kind of business, one which hounds the police and society in general…
Download full paperFile format: .doc, available for editing
HIDE THIS PAPERGRAB THE BEST PAPER94.2% of users find it useful 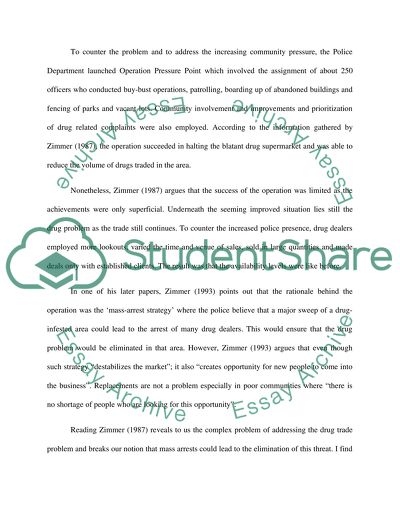 Fantino (2000), a former Chief of Police, states that the role of the policemen is to ensure the safety and security of the members of society against those who may wish it harm. The proliferation of drugs is certainly a threat to society and should be addressed in the soonest possible time. However, even with the many programs instituted by police agencies, the problem still lingers. Zimmer (1987) and the Vera Institute of Justice (1993) relate to us two police strategies that are conceptually effective but are actually insufficient.

In the 1980's, the drug problem in the East Side was getting rampant to the point that sales and usage of the illegal substances were blatantly exposed on the streets. The Lower East Side became the proverbial drug addict's heaven as he had unlimited access to drugs with little or no threat of arrest. This state of affairs was the result of the declining capacity of the police to counter the problem due to budget cuts and decline in personnel (Smith, 1982).

To counter the problem and to address the increasing community pressure, the Police Department launched Operation Pressure Point which involved the assignment of about 250 officers who conducted buy-bust operations, patrolling, boarding up of abandoned buildings and fencing of parks and vacant lots. Community involvement and improvements and prioritization of drug related complaints were also employed. According to the information gathered by Zimmer (1987), the operation succeeded in halting the blatant drug supermarket and was able to reduce the volume of drugs traded in the area.
Nonetheless, Zimmer (1987) argues that the success of the operation was limited as the achievements were only superficial. Underneath the seeming improved situation lies still the drug problem as the trade still continues. To counter the increased police presence, drug dealers employed more lookouts, varied the time and venue of sales, sold in large quantities and made deals only with established clients. The result was that the availability levels were like before.
In one of his later papers, Zimmer (1993) points out that the rationale behind the operation was the 'mass-arrest strategy' where the police believe that a major sweep of a drug-infested area could lead to the arrest of many drug dealers. This would ensure that the drug problem would be eliminated in that area. However, Zimmer (1993) argues that even though such strategy "destabilizes the market"; it also "creates opportunity for new people to come into the business". Replacements are not a problem especially in poor communities where "there is no shortage of people who are looking for this opportunity".
Reading Zimmer (1987) reveals to us the complex problem of addressing the drug trade problem and breaks our notion that mass arrests could lead to the elimination of this threat. I find Operation Pressure Point praiseworthy because the methods were based on a range of consistent, integrated and comprehensive approaches appropriate to local problems but I also find it lacking in the sense that it was unable to realize that weeds should be pulled at its roots and not only at its stalk. From my point of view, the operation achieved only little because it did not provide for any methods to identify the main suppliers but instead focus on the low end dealers. Instead of focusing only the consumer side, they should also have broken the supply chain right from the ...Download file to see next pagesRead More
Share:
Tags
Cite this document
(“Operation Pressure Point.The Drug Trade Problem Essay”, n.d.)
Operation Pressure Point.The Drug Trade Problem Essay. Retrieved from https://studentshare.org/miscellaneous/1501659-operation-pressure-pointthe-drug-trade-problem

.... According to the general point of view of economists, international trade has profited in terms of efficiency and economic welfare courtesy of the escalating trade levels as well as investments between countries. For instance; according to David Ricardo’s concept, in which he explained the theory of comparative advantage, a nation can take advantage of producing commodities which marginal production cost is relatively lower. This results into a better allocative efficiency and also economic welfare. Examples may include the economy of Canada which realises low costs in land provision and thus exploits this by maximasing on its agricultural production. Asian countries like China have also intensified in making exports of manufactured...
6 Pages(1500 words)Coursework

... markets fail to produce efficient results. Unemployment is a problematic area both from macroeconomic and microeconomic point of view. Unemployment remains the subject matter of macroeconomics until the allocation of resources by the government for growth oriented plans and programmes are productive to add to the employment generation and increase its level from the existing base. However, unemployment is not a straight subject as this is beset with various microeconomic problems of wages, skill, training, hours of work, welfare and myriad of employment dynamics. Therefore, labour economics deals with all these aspects to look into the details and finds solution (Sundram and Vaish, 1992). Description Unemployment is an important measure...
6 Pages(1500 words)Assignment

Making its products cheaper in the US and thus encouraging imbalanced trade. It has been universally agreed that the free-floating Yuan would be significantly worth 15 cents.
Chinese economists feel that the impact has been over-exaggerated and particularly to America from Yuan revaluation. In particular, a stronger Yuan will not reduce the US’s trade deficit as there is a very smart segment of overlap between China and America Production and hence the US will not be able to replace Chinese imports. The consumer will end up paying more for imports from china or Vietnam and this would be like imposing a tax on US consumers.
The World Bank chief also disagrees with the US’s suggestion on China's currency rise a...
9 Pages(2250 words)Assignment
sponsored ads
Save Your Time for More Important Things
Let us write or edit the essay on your topic "Operation Pressure Point.The Drug Trade Problem" with a personal 20% discount.
GRAB THE BEST PAPER

Let us find you another Essay on topic Operation Pressure Point.The Drug Trade Problem for FREE!