Comments (0)
Add to wishlistDelete from wishlist
Cite this document
Summary
Collective bargaining, in the context of business, is the process through which an organized union of workers and their employer negotiate the terms of employment. More specifically, it is the negotiation between organized employees and their employer usually in an attempt by the employees to effect an improvement in wages, hours, rules, and working conditions.
…
Download full paperFile format: .doc, available for editing
HIDE THIS PAPERGRAB THE BEST PAPER94.7% of users find it useful 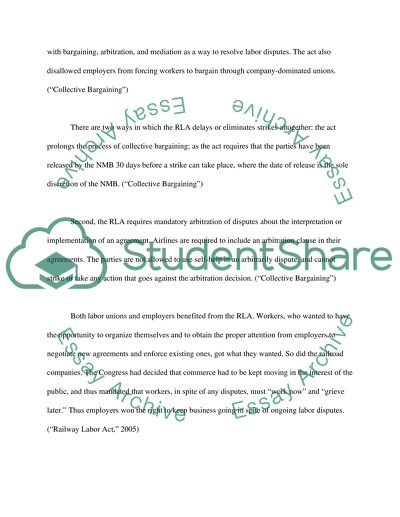 Download file to see previous pages ("United Airlines CEO," 2000)
In the airline industry, bargaining is administered by the National Mediation Board (NMB) under the RLA. In the last half century the RLA, as applies to the airline industry, has resulted in strikes in less than 3 percent of all cases. In spite of this, most airline management views the process required by the RLA as antiquated and broken ("Ex-Gov. Goldschmidt," 2003)
The railway labor act of 1926 was the first major labor legislation passed by the U.S. Congress. Instead of forming rules that applied to the whole of U.S. Industry, it targeted the railroad business, then the most important part of the transportation business in U.S. ("Bargaining Under the Railway Labor Act"). The act's purpose was essentially to replace strikes with bargaining, arbitration, and mediation as a way to resolve labor disputes. The act also disallowed employers from forcing workers to bargain through company-dominated unions. ("Collective Bargaining")
There are two ways in which the RLA delays or eliminates strikes altogether: the act prolongs the process of collective bargaining; as the act requires that the parties have been released by the NMB 30 days before a strike can take place, where the date of release is the sole discretion of the NMB. ("Collective Bargaining")
Second, the RLA requires mandatory arbi...
("Collective Bargaining")
Both labor unions and employers benefited from the RLA. Workers, who wanted to have the opportunity to organize themselves and to obtain the proper attention from employers to negotiate new agreements and enforce existing ones, got what they wanted. So did the railroad companies. The Congress had decided that commerce had to be kept moving in the interest of the public, and thus mandated that workers, in spite of any disputes, must "work now" and "grieve later." Thus employers won the right to keep business going in spite of ongoing labor disputes. ("Railway Labor Act," 2005)

There are some exceptions to the "work now, grieve later" rule, however. Workers are allowed to refuse to work when they have a reasonable belief that the work is unsafe, and when work being asked for is in clear violation of the contract. However, if the company can make a "reasonable" claim that the contract justifies the work being requested, then the employee is expected to work, and report any grievances later. ("Bargaining Under the Railway Labor Act")

“How the Railway Labor Act Affected Bargaining in the Aviation Industry Essay”, n.d. https://studentshare.org/miscellaneous/1501592-how-the-railway-labor-act-affected-bargaining-in-the-aviation-industry.
Comments (0)
Click to create a comment or rate a document

...1. Assess the key macro factors that have influenced the UK grocery retailing industry since the early 1960s. The concept of organisational change is inherently intertwined with external threats and opportunities, which businesses must adapt to as part of strategic planning to continue long term growth. Senior and Fleming argue that the concept of organisational change has many faces, namely “convergent changes and transformational change that is organisation wide and characterised by radical shifts in strategy, mission values and associated changes of structures and systems” (In Thompson & Martin, 2005, p.41). Moreover, Johnson et al highlight that external macro-economic factors intrinsically impact strategy management and without...
13 Pages(3250 words)Assignment
sponsored ads
Save Your Time for More Important Things
Let us write or edit the essay on your topic "How the Railway Labor Act Affected Bargaining in the Aviation Industry" with a personal 20% discount.
GRAB THE BEST PAPER

Let us find you another Essay on topic How the Railway Labor Act Affected Bargaining in the Aviation Industry for FREE!