Comments (0)
Add to wishlistDelete from wishlist
Cite this document
Summary
Different studies assert that pregnancy is a period of dramatic changes in woman's life. It is a crisis time, when the woman goes through deep psychological changes, and makes absolute revision of her attitude towards herself and her own identity. These changes are usually described for adult women, but when the same process is happening to an adolescent, 'the effect is often magnified'…
Download full paperFile format: .doc, available for editing
HIDE THIS PAPERGRAB THE BEST PAPER95.9% of users find it useful 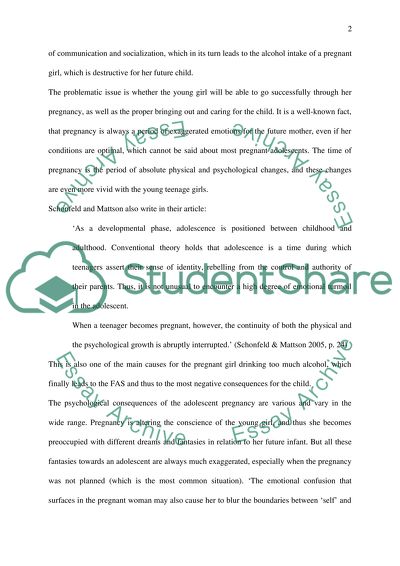 Download file to see previous pages (Jessor 2004, p. 45) The reasons for teenage pregnancy and fetal alcohol syndrome are mostly psychological and social, and it is understandable, that the influence and effects of teenage pregnancy may become terrible for young girls, if not properly treated.
In connection with this, Shonfeld and Mattson (2005) write, that 'the socialization deficits and views on stealing and obeying the law may serve as early indicators of later maladaptive behaviour. In terms of the overall moral maturity score, it is possible that this global measure is not sensitive enough in detecting delinquency in youth with prenatal alcohol exposure.' (Schonfeld & Mattson 2005, p. 24) What is meant here is that leaving school causes the lack of communication and socialization, which in its turn leads to the alcohol intake of a pregnant girl, which is destructive for her future child.
The problematic issue is whether the young girl will be able to go successfully through her pregnancy, as well as the proper bringing out and caring for the child. It is a well-known fact, that pregnancy is always a period of exaggerated emotions for the future mother, even if her conditions are optimal, which cannot be said about most pregnant adolescents. The time of pregnancy is the period of absolute physical and psychological changes, and these changes are even more vivid with the young teenage girls.
Schonfeld and Mattson also write in their article:
'As a developmental phase, adolescence is positioned between childhood and adulthood. Conventional theory holds that adolescence is a time during which teenagers assert their sense of identity, rebelling from the control and authority of their parents. Thus, it is not unusual to encounter a high degree of emotional turmoil in the adolescent.
When a teenager becomes pregnant, however, the continuity of both the physical and the psychological growth is abruptly interrupted.' (Schonfeld & Mattson 2005, p. 24)
This is also one of the main causes for the pregnant girl drinking too much alcohol, which finally leads to the FAS and thus to the most negative consequences for the child.
The psychological consequences of the adolescent pregnancy are various and vary in the wide range. Pregnancy is altering the conscience of the young girl, and thus she becomes preoccupied with different dreams and fantasies in relation to her future infant. But all these fantasies towards an adolescent are always much exaggerated, especially when the pregnancy was not planned (which is the most common situation). 'The emotional confusion that surfaces in the pregnant woman may also cause her to blur the boundaries between 'self' and 'other'. (Blos, 1980) With the child developing in the girl's body, their identities often tend to merge, which happens on psychological and also on the physical level. But this sense of merging will ...Download file to see next pagesRead More
Share:
Tags
Cite this document
(“Psychology of Teenage Pregnancy and Fetal Alcohol Syndrome Essay”, n.d.)
Psychology of Teenage Pregnancy and Fetal Alcohol Syndrome Essay. Retrieved from https://studentshare.org/miscellaneous/1501494-psychology-of-teenage-pregnancy-and-fetal-alcohol-syndrome

Depending on the time of gestation and the type of diabetes mellitus the character of these metabolic changes will vary. (Bender HS, Chickering WR, 1985.)
In the aetiology of complications of diabetic pregnancy, the disturbances of intermediary metabolism play a major role, in addition to abnormalities of immune function in both the mother and foetus, as well as in the placenta ( Fallucca F, 1997). The metabolic changes in insulin-dependent diabetes mellitus include postprandial hyperaminoacidemia, hyperlipidemia, and hyperglycaemia. (Reece EA, Homko C, Wiznitzer A, 1994.)
In particular, maternal hyperglycaemia results in foetal hyperglycaemia, which is corrected by increasing insulin secretion and consequent foetal hype...

While we know that alcohol negatively affects the child before birth, the exact biological and chemical process is still being studied (Day, 1992).

Classified as ICD-9 and ICD-10 under the International Statistical Classification of Diseases and Related Health Problems, Fetal Alcohol Syndrome is a manifestation of permanent birth defects that are observed in the children of women who consume alcohol during pregnancy. As reported by Forrest and Florey (1991) as well as Day (1992), the level of consumption or the frequency of alcohol use while a woman is pregnant has an uncertain effect in the amount of damage that can be done to the fetus. Therefore, while the effects before birth are being studied, it becomes an importa...
6 Pages(1500 words)Term Paper

Humans were born with the capacity to know and the freedom to choose between good and evil.  Given this freedom, we are responsible for our decisions, actions, and thoughts. Consequently, there is a need for therapy when an individual is unable or unwilling to accept personal responsibility for emotional problems.   We are not perfect therefore we make imperfect decisions. Therapy in this integrative approach attempts to get the client to live at peace with themselves in spite of mistakes. However, the level of peace depends on the extent to which one allows the environment to influence one’s inner world. Individuals, therefore, have the capability to improve themselves. Nonetheless, we have the tendency to develop...
6 Pages(1500 words)Assignment
sponsored ads
Save Your Time for More Important Things
Let us write or edit the essay on your topic "Psychology of Teenage Pregnancy and Fetal Alcohol Syndrome" with a personal 20% discount.
GRAB THE BEST PAPER

Let us find you another Essay on topic Psychology of Teenage Pregnancy and Fetal Alcohol Syndrome for FREE!