Comments (0)
Add to wishlistDelete from wishlist
Cite this document
Summary
A person who is an inspiration and a leader from the front is Dr Jean Palmer of Whittington Hospitals, London. (I have changed the names of the doctor and the hospital since she did not want the name to be released). I selected this person since she is managing nearly forty staff, sorts out their daily issues, makes sure the patients get their due attention and helps in technologically advancing the hospital in general medicine…
Download full paperFile format: .doc, available for editing
HIDE THIS PAPERGRAB THE BEST PAPER95.1% of users find it useful 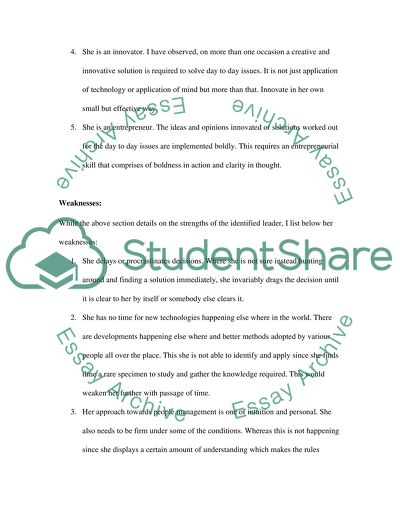 Extract of sample "Leadership & the Role of Managers"

Leadership and the Role of Managers Introduction A person who is an inspiration and a leader from the front is Dr Jean Palmer of Whittington Hospitals, London. (I have changed the names of the doctor and the hospital since she did not want the name to be released). I selected this person since she is managing nearly forty staff, sorts out their daily issues, makes sure the patients get their due attention and helps in technologically advancing the hospital in general medicine. This meant that she needs to be abreast with many of the latest innovations happening in medicine and a host of new instruments and innovations that keep coming in.
Strengths:
As a leader she displays the following strengths:
1. She is a leader and a role model. Most of the junior staff looks up at her to provide the needed guidance and a person whom they are going to emulate in their life.
2. She is a problem solver. When Junior Doctors get into technical issues relating to a specific patient and would like to have help in sorting out, understanding and in clearing the problem, they expect her to provide solutions.
3. She is an organizer. Most of the day to day issues like to patient directions, planning the jobs for the team below her all require careful and seamless organizing.
4. She is an innovator. I have observed, on more than one occasion a creative and innovative solution is required to solve day to day issues. It is not just application of technology or application of mind but more than that. Innovate in her own small but effective way.
5. She is an entrepreneur. The ideas and opinions innovated or solutions worked out for the day to day issues are implemented boldly. This requires an entrepreneurial skill that comprises of boldness in action and clarity in thought.
Weaknesses:
While the above section details on the strengths of the identified leader, I list below her weaknesses:
1. She delays or procrastinates decisions. Where she is not sure instead hunting around and finding a solution immediately, she invariably drags the decision until it is clear to her by itself or somebody else clears it.
2. She has no time for new technologies happening else where in the world. There are developments happening else where and better methods adopted by various people all over the place. This she is not able to identify and apply since she finds time a rare specimen to study and gather the knowledge required. This would weaken her further with passage of time.
3. Her approach towards people management is one of intuition and personal. She also needs to be firm under some of the conditions. Whereas this is not happening since she displays a certain amount of understanding which makes the rules flexible and leads to confusion in an operating environment where rules cannot be altered for the sake of a single person.
Conclusion
This person who was studied by me is considered one of the best managers, since in her department the attrition rate is nearly zero for the last two years. The results of her department is also good and they service a large number of patients numbering to more than 300 people a day, with 15 doctors, nursing assistants and other support staff employing about 40 people in the department. Read More
Share:
Tags
Cite this document
(“Leadership & the Role of Managers Essay Example | Topics and Well Written Essays - 500 words”, n.d.)
Leadership & the Role of Managers Essay Example | Topics and Well Written Essays - 500 words. Retrieved from https://studentshare.org/miscellaneous/1501419-leadership-the-role-of-managers

CHECK THESE SAMPLES OF Leadership & the Role of Managers

Leadership & the Role of Managers

...? Leadership and the Role of Managers Leadership and the Role of Managers Managers play a crucial role in the management and facilitation of delivery of healthcare to patients. For effective management, each manager is expected to posses certain qualities to enable them execute their functions effectively (Marquis and Huston, 2009). In order to get a better understanding of various aspect of leadership and roles of managers in a healthcare institution, I held an interview with Patrick O’Day, the program manager, Healthcare Systems Services at GE Healthcare. The purpose of the interview is to provide demographic information about him, his role and description of healthcare program that he manages. The interview is also meant to unearth his...
3 Pages(750 words)Essay

Internal communication in any organization has been found to play a significant role in regard to role achievement in any business venture. When the internal communication department closely works with the top management, it has been found that job satisfaction levels rise which in effect translates to higher individual and group output from the workers (HRM guide, 2009). It is the role of the internal communication department to ensure that the strategic organizational direction is passed on to all employees and followed as planned so as to guarantee the achievement of intended outcomes.
With the current developments towards globalization, knowledge availability has become more readily available and the economy has approache...
9 Pages(2250 words)Assignment
sponsored ads
Save Your Time for More Important Things
Let us write or edit the essay on your topic "Leadership & the Role of Managers" with a personal 20% discount.
GRAB THE BEST PAPER

Let us find you another Essay on topic Leadership & the Role of Managers for FREE!