Comments (0)
Add to wishlistDelete from wishlist
Cite this document
Summary
The aim of Six Sigma is to control all processes at the outset well before they get to the customerThis is done in a variety of ways by different firms.The following approaches represent some of the philosophical underpinnings:…
Download full paperFile format: .doc, available for editing
HIDE THIS PAPERGRAB THE BEST PAPER91.6% of users find it useful 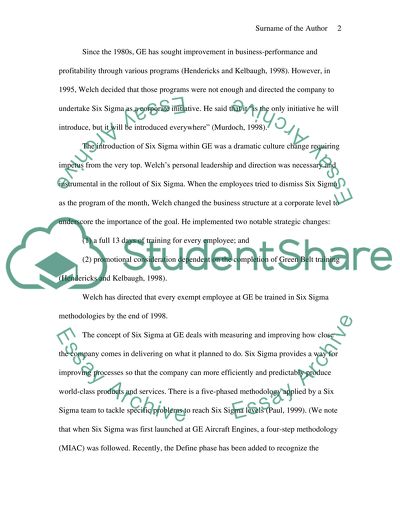 Download file to see previous pages Its goal is to ensure that there are no problems with any product or service that GE provides. This is done through quarterly customer surveys and daily manufacturing checks by internal engineers (Cohen, 1997).Since the 1980s, GE has sought improvement in business-performance and profitability through various programs (Hendericks and Kelbaugh, 1998). However, in 1995, Welch decided that those programs were not enough and directed the company to undertake Six Sigma as a corporate initiative. He said that it "is the only initiative he will introduce, but it will be introduced everywhere".The introduction of Six Sigma within GE was a dramatic culture change requiring impetus from the very top. Welch's personal leadership and direction was necessary and instrumental in the rollout of Six Sigma. When the employees tried to dismiss Six Sigma as the program of the month, Welch changed the business structure at a corporate level to underscore the importance of the goal. He implemented two notable strategic changes:The concept of Six Sigma at GE deals with measuring and improving how close the company comes in delivering on what it planned to do. Six Sigma provides a way for improving processes so that the company can more efficiently and predictably produce world-class products and services. There is a five-phased methodology applied by a Six Sigma team to tackle specific problems to reach Six Sigma levels (Paul, 1999). (We note that when Six Sigma was first launched at GE Aircraft Engines, a four-step methodology (MIAC) was followed. Recently, the Define phase has been added to recognize the importance of having a well-scoped project and to be in line with the current practices across GE):
(1) Phase 1 - define (D). Who are the customers and what are their priorities
A Six Sigma project team identifies a project suitable for Six Sigma efforts based on business objectives as well as customer needs and feedback.
As part of the definition phase, the team identifies those attributes, called CTQs (critical to quality characteristics), that the customer considers to have the most impact on quality.
(2) Phase 2 - measure (M). How is the process measured and how is it performing
The team identifies the key internal processes that influence CTQs and measures the defects currently generated relative to those processes.
(3) Phase 3 - analyze (A). What are the most important causes of defects
The team discovers why defects are generated by identifying the key variables that are most likely to create process variation.
(4) Phase 4 - improve (I). How do we remove the causes of the defects
The team confirms the key variables and quantifies their effects on the CTQs.
It also identifies the maximum acceptable ranges of the key variables and validates a system for measuring deviations of the variables.
The team modifies the process to stay within the acceptable range.
(5) Phase 5 - control (C). How can we maintain the improvements
Tools are put in place to ensure that under the modified ...Download file to see next pagesRead More
Share:
Tags
Cite this document
(“Six Sigma at General Electric Essay Example | Topics and Well Written Essays - 1000 words”, n.d.)
Retrieved from https://studentshare.org/miscellaneous/1501250-six-sigma-at-general-electric

CHECK THESE SAMPLES OF Six Sigma at General Electric

Ineffective implementations, a greater part of Six Sigma projects is chosen for the evaluative bottom-line customer effect that is accomplished within two to six months (Bertels 2003). The projects conveyed through the use of an organized set of statistical instruments and process improvement strategies through the well-educated and well-trained workforce in an organization that has made it definite that Six Sigma is a career enhancement (ibid).

In business people’s dealings, they see companies perceiving Six Sigma in two ways, namely as an aggregate of powerful instruments for enhancing processes and products and as a framework for enhancing both the process-and-people-associated features of business performance....

The Role of UN Secretary General

...Has Ban Ki-moon demonstrated any success so far in developing the role of UN Secretary General? Ban Ki-moon has succeeded Kofi Annan as the current Secretary General of the United Nations. He took over from the latter in 2007 and has continued to work in his office ever since. He hails from South Korea, where he served as a career diplomat in the Ministry of Foreign Affairs. He also served as the foreign minister of Korea from 2004 to 2006. It was in 2006 that he was elected as the next (8th) Secretary General of the UN General Assembly. He passed a number of reforms when he came into power. He immediately took steps to reform the peacekeeping and UN employment regimes in place. He has had strong views on the issues regarding global...
6 Pages(1500 words)Assignment

...Principle of general average Table of Contents Table of Contents 2 3 Principle of general average 4 Introduction4 York-Antwerp Rules 4 Key elements of York-Antwerp Rules 5 Application of the rule of 2004 6 Rule A 6 Rule B 6 Rule C 7 Application of the rule of 1994 7 Rule D 7 Rule E 7 Rule F 8 Rule G 8 Examples of the York-Antwerp 8 Summary 9 Conclusion 9 References 10 Abstract This is a principle formulated by the ancient Greek in an assumption dealing with questions regarding jettison. However, different philosophers claim that the idea seems to have an ancient origin. All in all, the doctrines develop different losses added to those in jettison. In simpler terms, the crucial step is the recognition that expenditure...
6 Pages(1500 words)Term Paper

... Plan PHX General Plan Up Visioning Workshop On November I attended a Plan PHX General Plan up visioning workshop, which was held at Mountain Community Library 7050 South 24th Street starting from 6.00 pm to 8.00 pm. Plan PHX is a conscientious effort by the city of Phoenix to work together with its residents to shape the future of their city. The city has focused on creating public participation around two specific areas – the Phoenix general plan update and planning for neighborhood development around the light rail. Striving to make the update a strong, collaborative, and participatory product, the planning department’s first step in the update process was to establish an advisory group or “leadership committee.” This leadership...
6 Pages(1500 words)Assignment

... Electric Engineering Introduction More than half a century now, nuclear energy has been producing commercial electri in various countries. Though highly regarded as an alternative source of energy to electricity, these hopes have in the past twenty years diminished due to the dangers associated with this form of energy (Squassoni 10). Evidence from across several countries indicates that the general production of nuclear energy is gradually losing ground and people are now turning to more environmentally friendlier renewable sources of energy. For instance, as projected by the international energy agency, it is expected that by the year 2030 the global production of nuclear energy would reduce to only 10 percent from its current state...
7 Pages(1750 words)Case Study
sponsored ads
Save Your Time for More Important Things
Let us write or edit the essay on your topic "Six Sigma at General Electric" with a personal 20% discount.
GRAB THE BEST PAPER

Let us find you another Essay on topic Six Sigma at General Electric for FREE!