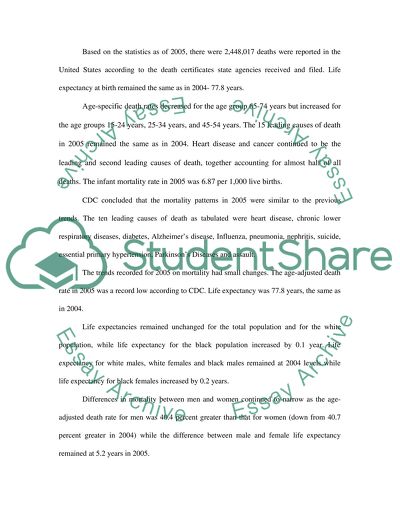 Vital Statistics Cooperative Program of the Centers for Disease Control and Prevention's, National Center for Health Statistics (NCHS) conducts annual survey regarding mortality, death rates, and mortality trends all over the United States taking into consideration the age, marital status, sex, race, and state of origin.
They are able to gather all the necessary data that they interpret from the death certificates submitted by funeral directors, physicians and coroners. The causes of death are based on ICD-10 for standardization of interpretation. ICD-10 is also known as International Classification of Diseases Tenth Revision.
The report from CDC presented detailed 2005 data on deaths and death rates according to a number of social, demographic, and medical characteristics. The data provided information on mortality patterns among residents of the United States by such variables as age, sex, Hispanic origin, race, marital status, educational attainment, injury at work, state of residence, and cause of death. Information on these mortality patterns is important for understanding changes in the health and well-being of the U.S. population
Mortality data in their report can be used to monitor and evaluate the health status of the Nation in terms of current mortality levels and long-term mortality trends, as well as to identify segments of the U.S. population at greater risk of death from specific diseases and injuries. Differences in death rates among various demographic subpopulations, including race and ethnic groups, may reflect subpopulation differences in factors such as socioeconomic status, access to medical care, and the prevalence of specific risk factors of a particular subpopulation.
Based on the statistics as of 2005, there were 2,448,017 deaths were reported in the United States according to the death certificates state agencies received and filed. Life expectancy at birth remained the same as in 2004- 77.8 years.
Age-specific death rates decreased for the age group 65-74 years but increased for the age groups 15-24 years, 25-34 years, and 45-54 years. The 15 leading causes of death in 2005 remained the same as in 2004. Heart disease and cancer continued to be the leading and second leading causes of death, together accounting for almost half of all deaths. The infant mortality rate in 2005 was 6.87 per 1,000 live births.
CDC concluded that the mortality patterns in 2005 were similar to the previous trends. The ten leading causes of death as tabulated were heart disease, chronic lower respiratory diseases, diabetes, Alzheimer's disease, Influenza, pneumonia, nephritis, suicide, essential primary hypertension, Parkinson's Diseases and assault.
The trends recorded for 2005 on mortality had small changes. The age-adjusted death rate in 2005 was a record low according to CDC. Life expectancy was 77.8 years, the same as in 2004.
Life expectancies remained unchanged for the total population and for the white population, while life expectancy for the black population increased by 0.1 year. Life expectancy for white males, white females and black males remained at 2004 levels while life expectancy for black females increased by 0.2 years.
Differences in mortality between men and women continued to narrow as the age-adjusted death rate for men was 40.4 percent greater than that for women (down from 40.7 percent greater in 2004) while the difference between male and female life expectancy remained at 5.2 years in 2005.
Differences in mortality between the black and white populations persisted. The age-adjusted death rate was 1.3 times greater, the infant mortality rate 2.4 times greater, and maternal mortality rate 3.3 times greater for the black population than that for the white population. Life expectancy for the white population exceeded that for the black population by 5.1 years.
The post neonatal mortality rate increased 3.1 percent between 2004 and 2005 and contributed to the observed but not statistically significant increase in the infant mortality rate.
REFERENCES:
Hoyert D, Singh G, Roseberg H. Sources of data on socioeconomic differential mortality in the United States. Journal of Official Statistics 11 (3): 233-60 1995.
Kung H-C, Hoyert DL, Xu JQ, Murphy SL. Deaths: Preliminary data for 2005. Health E-Stats. Hyattsville, MD. National Center for Health Statistics. Sept 2007.
Arias E. United States Life Tables, 2005. National vital statistics reports. Hyattsville, MD. National Center for Health Statistics. Forthcoming. Read More
Share:
Tags
Cite this document
(“Morbibity and mortality by race in US by agesexand location Essay”, n.d.)
Retrieved from https://studentshare.org/miscellaneous/1501215-morbibity-and-mortality-by-race-in-us-by-agesexand-location

“Morbibity and Mortality by Race in US by Agesexand Location Essay”, n.d. https://studentshare.org/miscellaneous/1501215-morbibity-and-mortality-by-race-in-us-by-agesexand-location.
Comments (0)
Click to create a comment or rate a document

This foreshadowing is confirmed in Act 1, Scene 2 where the injured soldier confirms that...

A person’s social circumstance significantly impacts their emotional and physical health.  This conclusion is derived from many sociological researchers and theorists who have long studied the general health status of individuals and factions of society from a social perspective.  Exploring the psychosocial mechanisms that link social location and health status provides ample evidence that those who are employed in low-end jobs are less educated, have lower incomes and are therefore of lower social status so experience greater life stresses.  They have little or no control of their employment or financial condition which leads to greater levels of stress thus poorer health on average than those of higher socia...
12 Pages(3000 words)Term Paper

These contribute to several challenges faced by the IC today1.
For example, the Japanese fleet’s attack on Pearl Harbor, which was a surprise attack and the subsequent entrance of America into the Second World War, illustrated the need to re-engineer the outdated policies and organization of the IC. The changes made by the U.S. in the IC, which occasioned from World War II are still palpable today2. Some changes were later made when the Senate Committees came together with the aim of investigating the Central Intelligence Agency (CIA), National Security Agency (NSA), Federal Bureau of Investigation (FBI), and Internal Revenue Service (IRS) to evaluate the possible abuses of power that transpired in the preceding years.<...
9 Pages(2250 words)Assignment
sponsored ads
Save Your Time for More Important Things
Let us write or edit the essay on your topic "Morbibity and mortality by race in US by agesexand location" with a personal 20% discount.
GRAB THE BEST PAPER

Let us find you another Essay on topic Morbibity and mortality by race in US by agesexand location for FREE!