Comments (0)
Add to wishlistDelete from wishlist
Cite this document
Summary
Outline of the event in Brief: The event will consist of one medium size covered stage, with administration and security huts, backstage, dressing room and VIP area for the live band and guests, security barriers, ticket booths, all for 1700 attendees. There shall be barbeque, food-drinks, and dancers on stage, then an action packed movie: The Bourne Supremacy.
…
Download full paperFile format: .doc, available for editing
HIDE THIS PAPERGRAB THE BEST PAPER96.9% of users find it useful 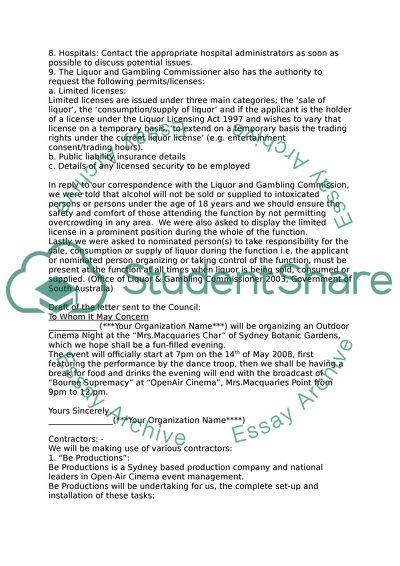 ...Assignment (Answers in Bold) Part A The following questions were answered based on the case of: Peter Smythe v Vincent Thomas [2007] NSWSC844 (3 August 2007) Available at: http://www.austlii.edu.au/au/cases/nsw/supreme_ct/2007/844.html. Question 1: In what court was the case heard (1 mark) The case was heard in the New South Wales Supreme Court. Question 2: Name the judge and explain his title. (2 marks) The judge is named Rein, and Rein is an administrative judge as evidenced by the title AJ. Question 3: Name the plaintiff and defendant and their counsel. (4 marks) The plaintiff is Peter Smythe and the defendant is Vincent Thomas. The plaintiff's counsel is B. Kasep, and the defendant's counsel is D.M. Loewenstein. Course Profile...
6 Pages(1500 words)Case Study

Selecting a Supplier or Contractor

... , improving the quality and helping the suppliers to improve themselves. This activity leads to an integrated development with a care for the supplier. The main principles in supplier management are based on the evaluation of the supplier. With these explanations regarding criteria and process of supplier selection, the next section is a multiple case study of four chosen projects where the criteria for supplier choice are different. 3. Projects for the Study: In this section, four different projects have been discussed in terms of the nature of the project, the client business, the main characteristics of the projects, the major priorities of the client and finally the choice of supplier. The first company chosen is based in Cork...
10 Pages(2500 words)Research Paper
sponsored ads
Save Your Time for More Important Things
Let us write or edit the essay on your topic "Contractor case study" with a personal 20% discount.
GRAB THE BEST PAPER

Let us find you another Essay on topic Contractor case study for FREE!