Comments (0)
Add to wishlistDelete from wishlist
Cite this document
Summary
At adolescent, youth are prone to bouts of violence. School violence can be seen as such one form of violence. It is a problem especially in public schools. This is against the societal expectations of school. It is supposed to be a safe place for the development of the child…
Download full paperFile format: .doc, available for editing
HIDE THIS PAPERGRAB THE BEST PAPER98.6% of users find it useful 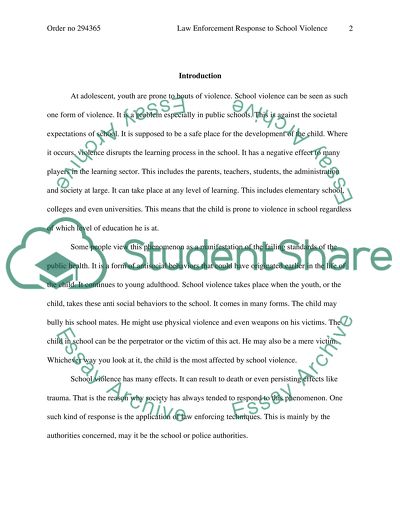 Download file to see previous pages This includes elementary school, colleges and even universities. This means that the child is prone to violence in school regardless of which level of education he is at.
Some people view this phenomenon as a manifestation of the failing standards of the public health. It is a form of antisocial behaviors that could have originated earlier in the life of the child. It continues to young adulthood. School violence takes place when the youth, or the child, takes these anti social behaviors to the school. It comes in many forms. The child may bully his school mates. He might use physical violence and even weapons on his victims. The child in school can be the perpetrator or the victim of this act. He may also be a mere victim. Whichever way you look at it, the child is the most affected by school violence.
School violence has many effects. It can result to death or even persisting effects like trauma. That is the reason why society has always tended to respond to this phenomenon. One such kind of response is the application of law enforcing techniques. This is mainly by the authorities concerned, may it be the school or police authorities.
There are various ways to determine whether violence is school based or not. It has to meet certain thresholds for it to be labeled school violence. It has to occur on the school property (Guthner, 2002). Alternatively, it could have occurred on the way to the learning institution. When it takes place on the way to or from a school sponsored occasion, it can also be called school violence (Malinowski, 2003).
In looking at the law enforcement response to school violence, we will look at how they respond to both the victim and the perpetrator. The school administration is the first line of response to school based violence (Kimberly, 2004). This involves the teachers and the school security apparatus. Remember that school violence can be perpetrated by the students or from an outsider to the school. Then the other fall back is the law administrators. There are various ways to respond to this form of violence.
There is the strategy that is used when the violence has already taken place. This is called the intervention strategy. 0It includes evacuation of the victim. The victim of violence is taken to a medical facility. This is if he had acquired injuries (Russell, 2005). The school should be having a medical facility on the property. This is a dispensary or a school based health provider. This goes a long way to save the life of the victim. Arrangements could be made to take the victim to a professional doctor using ambulance or any other form of school transport. Counseling is very important if there is evidence that the victim could have experienced psychological problems. The perpetrator is then taken by the school administration for interrogation. It is the responsibility of the administration to find out why the perpetrator resorted to violence. If he is a student, counseling or expulsion from the school are some of the strategies employed by the school administration. He is apprehended by the school administration if he is from outside the school.
Another response is to prevent the occurrence of the violence (Tonkin, 2006). This includes the process of identifying sources of threats and neutralizing them. The law enforcers should be ...Download file to see next pagesRead More
Share:
Tags
Cite this document
(“Law Enforcement Response to School Violence Essay”, n.d.)
Law Enforcement Response to School Violence Essay. Retrieved from https://studentshare.org/miscellaneous/1501013-law-enforcement-response-to-school-violence

CHECK THESE SAMPLES OF Law Enforcement Response to School Violence

Thus, the advertisement placed by Adams in the local newspaper is an invitation to treat and not an offer, as per the case law discussed above. It is to be determined, whether Adam had formed legally binding contracts...
6 Pages(1500 words)Case Study
sponsored ads
Save Your Time for More Important Things
Let us write or edit the essay on your topic "Law Enforcement Response to School Violence" with a personal 20% discount.
GRAB THE BEST PAPER

Let us find you another Essay on topic Law Enforcement Response to School Violence for FREE!