Comments (0)
Add to wishlistDelete from wishlist
Cite this document
Summary
Marckwardt asserts that the concept of a lexicographer as an objective recorder of language was not to be fully grasped until the publication of the Oxford English Dictionary (OED) in 1928 (231). The media seemed to have quickly embraced the concept by announcing in the Times editorial that "very little is not common or unclear to the lexicographer, whose business is to record, interpret, and illustrate, and not to criticize or impose tests" ("The Supplement -and After").
…
Download full paperFile format: .doc, available for editing
HIDE THIS PAPERGRAB THE BEST PAPER96.1% of users find it useful 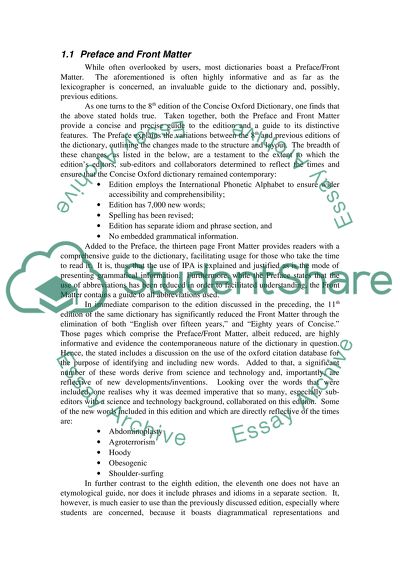 Extract of sample "Language and Dictrionaries"

Download file to see previous pages In his proposal for the new undertaking in lexicography, Richard Chenevix Trench made a bold statement by announcing that it is not the function of a dictionary to provide standards (5). Trench described the role of a lexicographer as one of "an historian of it [language], not a critic" (5), whose task is to "collect and arrange all the words, whether good or bad," and "to make his inventory complete" (6).
James A.H. Murray (not the first editor, but who is commonly associated with the beginning of the dictionary) further expounded on the ideas proposed by Trench. Murray explicated that the role of a lexicographer, as a historian, is not simply to record words:
but to furnish a biography of each word, giving as nearly as possible the date of its birth or first known appearance, and, in the case of an obsolete word or sense, or its last appearance, the source from which it was actually derived, the form and sense with which it entered the language or is first found in it, and the successive changes of form and developments of sense which it has since undergone. (47)
However, the original OED was not able to achieve the truly descriptive model of lexicographical creation. Indeed, as adamant as Trench was on including "all the words, whether good or bad" (6), he conceded that "A Dictionary ought to know its own limits" (56). Trench especially protested against "the drafting into the Dictionary a whole army of purely technical words" (57). Interestingly, these words he did not consider as words but as mere signs (57). Another stratum of vocabulary that was originally banned from the OED was obscene terminology. Indeed, Bryson contends that much of the obscene vocabulary did not appear in the OED until after 1972 (222).
Unlike Johnson's and Webster's dictionaries, the OED was no longer a work of a single person but "the combined action of many" (Trench, qtd. in Landau 79). To reflect the fluidity of the language and the mutability of the society, the OED editors continued making adjustments and additions to the dictionary. The first supplementary volume came out in 1933 - five years after the OED was published. In the OED2 preface, the editors recount that most of the additions for the Supplement and for the second edition of the OED concentrated on including more scientific vocabulary, slang, and words from different varieties of English.
1.1 Preface and Front Matter
While often overlooked by users, most dictionaries boast a Preface/Front Matter. The aforementioned is often highly informative and as far as the lexicographer is concerned, an invaluable guide to the dictionary and, possibly, previous editions.
As one turns to the 8th edition of the Concise Oxford Dictionary, one finds that the above stated holds true. Taken together, both the Preface and Front Matter provide a concise and precise guide to the edition and a guide to its distinctive features. The Preface explains the variations between the 8th and previous editions of the dictionary, outlining the changes made to the structure and layout. The breadth of these changes, as listed in the below, are a testament to the extent to which the edition's editors, sub-editors and collaborators determined to reflect the times and ensure that the Concise Oxford ...Download file to see next pagesRead More
Share:
Tags
Cite this document
(“Language and Dictrionaries Essay Example | Topics and Well Written Essays - 1250 words”, n.d.)
Retrieved from https://studentshare.org/miscellaneous/1500859-language-and-dictrionaries

CHECK THESE SAMPLES OF Language and Dictrionaries

Skinner and many others. From their theories and arguments (Avram) Noam Chomsky, an American linguist and educator, as well as political activist, came up with his own views and theories which rejected, accepted and added depth in the study of language revolutionizing linguistics.
Today, English is known to be the universal language. To be at par with the rest of the world and to be able to compete and join the bandwagon of technology and business, even professionals of different nationalities study language without so much of a difficulty.
The paper consists of discussions on Chomsky’s view on Language Development focusing more on what is called the “universal grammar” comparing it with the theories of...

The use of the narrator in the novel helps illustrate sensual, erotic, and heartbreaking moments. To achieve its goal of exploring the acknowledged subject of love, betrayal, beauty, and desire, the author approaches the issues with an overwhelming zeal. Hence, the aim of the study is to evaluate the various techniques used in the two narratives in communicating their notions of the various subjects within the novels.
Acker uses language from other writers; as well, the plot in her fiction employs appropriation, which in return propels appropriation to the extreme since a huge part of her writing integrates texts of fiction from past writers. Blood and Guts in High school deal with the journey of a young lady through a dark w...
8 Pages(2000 words)Literature review
sponsored ads
Save Your Time for More Important Things
Let us write or edit the essay on your topic "Language and Dictrionaries" with a personal 20% discount.
GRAB THE BEST PAPER

Let us find you another Essay on topic Language and Dictrionaries for FREE!