Comments (0)
Add to wishlistDelete from wishlist
Cite this document
Summary
The big population in New York has over 179,000 speakers of the endangered languages (Welcher). The endangered languages also known as ‘other…
Download full paperFile format: .doc, available for editing
HIDE THIS PAPERGRAB THE BEST PAPER97.1% of users find it useful 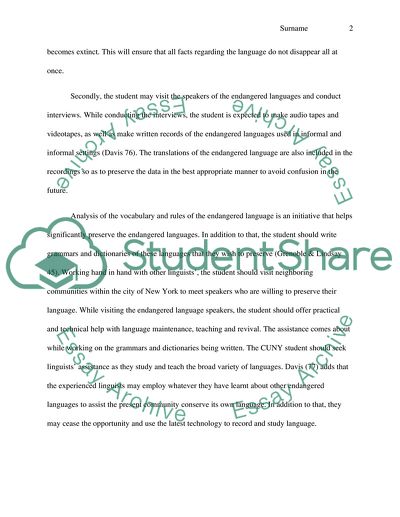 CHECK THESE SAMPLES OF Multilingualism in new york

Bilingualism in Politics in the United States

...confusion among the people because voting is used to determine senate members and the president. This poses a threat to the American presidential candidates because the Hispanic vote is influential. Presidential candidates have been keen to appeal to the Hispanic voters because they are concentrated in Texas, Illinois, California, Florida and New York, the key states carrying more than half votes required to win the presidency (Schaefer, 2006). Allowing multilingualism in politics may create the impression that illegal immigrants have the right to vote hence threatening the vote power of the natives. Some citizens however support multilingualism and political candidates...
1 Pages(250 words)Essay

...?The Hilton New York The hospitality industry has been thriving in New York for a long time. One organization that has stood to offer quality services without losing its reputation in my locality is Hilton New York. The organization hosts a lot of local and international tourists and is a favourite place of residence for visiting presidents and other prominent persons visiting the United States of America. The Hotel’s position as a centre for tourists makes it an interesting business to analyse. Hilton New York is situated in the 53rd Street, Sixth Avenue, New York City...
2 Pages(500 words)Essay

Should English become the official language. (Should there be an official world language.)

..., as it enhances creative skills and divergent and abstract thinking. Such cognitive development would never be possible with monolingualism. Moreover, imposing one language to be used by the whole world would lead to the destruction of the national languages of majority of the world’s countries and thus individuals’ culture identity, because national languages are an important part of one’s heritage. References Baker, C., & Jones, S. P. (1998). Encyclopedia of bilingualism and bilingual education. Clevedon: Multilingual Matters. Ennaji, M. (2005). Multilingualism, cultural identity, and education in Morocco. New York: Springer. Kharkhurin, A. V. (2012)....
5 Pages(1250 words)Essay

...New York Order No. 290788 No. of pages: 4 Tom Wolfe narrates great epiphanies of New York in the 1980's in his book d "A Sunday kind of Love." The author is explicit and vivid in his explanation of his experiences on the streets of New York on a certain morning at the IRT subway station situated on 50th street and Broadway. He specifically makes mention of a young couple, barely eighteen years of age who engage in an interlocking embrace in the glare of public view and kiss each other passionately, quite oblivious of the hustle and bustle around them and are only aware of each other and no one else. Passers by, pass some lewd comments,...
4 Pages(1000 words)Book Report/Review

...New York Topic One of the key points in Tim Cresswell’s article “Defining Places” (2004) is the idea that the term ‘place’ doesn’t simply refer to a specific location but is instead used to refer to a variety of ideas and concepts that are tied up in our conception of place. The author illustrates how space (a specific location) is different from place (as an idea of a particular place with a specific character and socio-political concept) as he focuses in on New York’s Lower East Side, specifically into Tompkins Square Park and the various conceptions that have developed in association with this space. Illustrating how this area has a special meaning to people through...
7 Pages(1750 words)Essay

...Review The essence of this article is a remembrance of good times experienced during the summer vacation, in the big of New York as a child. This remembrance by the author rekindles the fond memories of summer vacations that linger on in any reader. The article is interesting, as it jogs the memory that as a child it was simple things like eating ice creams, playing in water, or playing with newly found playmates that enlivened the summer vacations, and heightened the joy experienced. The author develops the joyful experiences of summer vacations in New York in a systematic and coherent manner. Starting with the sounds and smells that are a hallmark of summer...
2 Pages(500 words)Essay

...26 September, New York It happens once in a blue moon that you have a big apple in your hand and another Big Apple under your feet. Yes, I was eating a big apple at my aunt’s in New York. It was a night that I had come to New York for. It was the first time that I had come to New York in my whole life. At 2:45 am, I went out on my own to explore the city. I had presumed it to be a cold, quiet street. In the chilling December midnight, I had taken a torch with me to guide me along the way. But, oh! whuzzaaaaaaaaaaaat! With my mouth wide open, the torch slipped off my hand. The city was all awake! There...
2 Pages(500 words)Essay

Let us find you another Essay on topic Multilingualism in new york for FREE!