Comments (0)
Add to wishlistDelete from wishlist
Cite this document
Summary
Language is the wonderful medium of communication which only the human beings have been gifted among all living beings. "Man is a social animal" is a famous saying which depicts the hierarchy in which man resides on the top most categories. Sociology evolved with evolution of language and languages always change…
Download full paperFile format: .doc, available for editing
HIDE THIS PAPERGRAB THE BEST PAPER91.7% of users find it useful 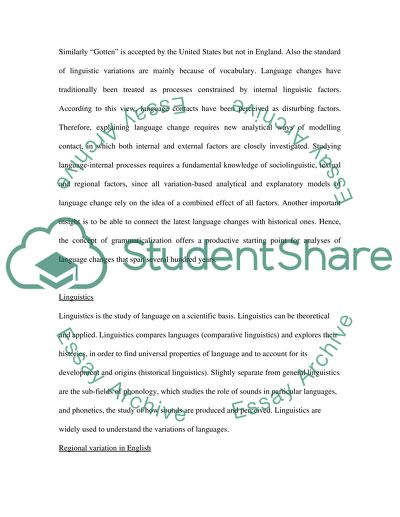 Download file to see previous pages These variations constitute the dialects of the people. Many factors have influenced to develop a standard form of language in all major speech communities. These in turn have been used as the official dialects of the communities. (The Columbia electronic encyclopedia,2006)
The official dialect usually differs from the day to day language, it has some "officiality" in it which would contain certain standards of grammar, pronunciations etc. The standard English of England is derived from London English. A person is marked as cultivated in the United states which entails usage of standard grammar and pronunciation. Also the degree of politeness of a person is judged by the efficiency with which he or she speaks the standard language. Sometimes ordinary speech can be affected by the standard language. Hence some usages would tend to be incorrect such as "you was" in place of "you were" etc. Similarly "gotten" is accepted in United States but not in England. Similarly "Gotten" is accepted by the United States but not in England. Also the standard of linguistic variations are mainly because of vocabulary. Language changes have traditionally been treated as processes constrained by internal linguistic factors. According to this view, language contacts have been perceived as disturbing factors. Therefore, explaining language change requires new analytical ways of modelling contact, in which both internal and external factors are closely investigated. Studying language-internal processes requires a fundamental knowledge of sociolinguistic, textual and regional factors, since all variation-based analytical and explanatory models of language change rely on the idea of a combined effect of all factors. Another important insight is to be able to connect the latest language changes with historical ones. Hence, the concept of grammaticalization offers a productive starting point for analyses of language changes that span several hundred years.
Linguistics
Linguistics is the study of language on a scientific basis. Linguistics can be theoretical and applied. Linguistics compares languages (comparative linguistics) and explores their histories, in order to find universal properties of language and to account for its development and origins (historical linguistics). Slightly separate from general linguistics are the sub-fields of phonology, which studies the role of sounds in particular languages, and phonetics, the study of how sounds are produced and perceived. Linguistics are widely used to understand the variations of languages.
Regional variation in English
Everyone speaks some form of regional dialect a variety of a language that differs in pronunciation, grammar, and vocabulary from those spoken in other regions. In this sense, a region implies a construct of social and historical facts as well as a geographic area. The shared linguistic features that make up a regional dialect include historical facts of migration and community experience, social facts of ethnic identity, and geographic facts of climate and terrain. Each regional dialect also includes a number of social dialects that reflect the age, education, social class, and ethnic identity of its speakers.
In England various dialects are spoken region wise like Scottish gaelic , Irish ...Download file to see next pagesRead More
Share:
Tags
Cite this document
(“Linguistic features that distinguish regional and social varieties of Essay”, n.d.)
Linguistic features that distinguish regional and social varieties of Essay. Retrieved from https://studentshare.org/miscellaneous/1500806-linguistic-features-that-distinguish-regional-and-social-varieties-of-english

“Linguistic Features That Distinguish Regional and Social Varieties of Essay”, n.d. https://studentshare.org/miscellaneous/1500806-linguistic-features-that-distinguish-regional-and-social-varieties-of-english.
Comments (0)
Click to create a comment or rate a document

Erving Goffman was an astute observer of society, who immersed himself in the social environment which he was studying. He carefully observed and recorded the ways in which people’s behavior and interpersonal interactions are carried out in everyday life. He notes that “people perform their social roles and, as they do so, they produce social order through their actions and the regu...
6 Pages(1500 words)Article
sponsored ads
Save Your Time for More Important Things
Let us write or edit the essay on your topic "Linguistic features that distinguish regional and social varieties of English" with a personal 20% discount.
GRAB THE BEST PAPER

Let us find you another Essay on topic Linguistic features that distinguish regional and social varieties of English for FREE!