Comments (0)
Add to wishlistDelete from wishlist
Cite this document
Summary
Japanese Post-War Economic Miracle is the name given to the historical phenomenon of Japan's record period of economic growth following World War II, spurred both by US investment, which has been made by the American government, under the auspices of the Supreme Commander of the Allied Powers, and Japanese government economic interventionism in particular through their Ministry of International Trade and Industry (Ellington, 2004).
…
Download full paperFile format: .doc, available for editing
HIDE THIS PAPERGRAB THE BEST PAPER99% of users find it useful 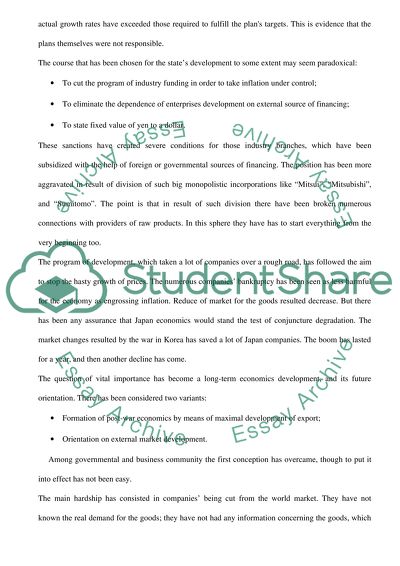 Download file to see previous pages It has been destroyed about 30 % of basic industry equipment. After numerous bombing Nagasaki and Hiroshima has been almost purely ruinous. The capital of the country, Tokyo, has stayed in ruin. There has been demobilized about 9 million soldiers, moreover 1.5 million people has entered the country as refugees. The inflation has reached 5000 %. There has been overall shortage of goods and materials. There has been a great dearth. The value of the yen to the dollar has been constantly falling down that has evidenced that financial system of the state has been completely unsettled. Notwithstanding Japanese people has felt release with the end and war. The society has been full of optimistic expectations. Everybody has been equally poor, and everybody has had the same chances. They have started everything from the very beginning.
The great role of Japan economics development has been played by Ministry of International Trade and Industry (MITI). It seems like no other governmental regulation or organization had more economic impact than this ministry. "The particular speed, form, and consequences of Japanese economic growth are not intelligible without reference to the contributions of MITI" (Johnson, 1982). The main achievement of Japan government that time has been an efficient cooperation between the Japanese government and private industry.
The other scholar, David R. Henderson, considers that "MITI plans for industry growth, and sometimes gets other agencies to use their powers to carry out the plans, the extent of MITI's control, and of government control generally, has been greatly exaggerated". It should be mentioned that in period 1955 -1973, Japan government has had six different National Economic Plans. But without exception actual growth rates have exceeded those required to fulfill the plan's targets. This is evidence that the plans themselves were not responsible.
The course that has been chosen for the state's development to some extent may seem paradoxical:
To cut the program of industry funding in order to take inflation under control;
To eliminate the dependence of enterprises development on external source of financing;
To state fixed value of yen to a dollar.
These sanctions have created severe conditions for those industry branches, which have been subsidized with the help of foreign or governmental sources of financing. The position has been more aggravated in result of division of such big monopolistic incorporations like "Mitsui", "Mitsubishi", and "Sumitomo". The point is that in result of such division there have been broken numerous connections with providers of raw products. In this sphere they have has to start everything from the very beginning too.
The program of development, which taken a lot of companies over a rough road, has followed the aim to stop the hasty growth of prices. The numerous companies' bankruptcy has been seen as less harmful for the economy as engrossing inflation. Reduce of market for the goods resulted decrease. But there has been any assurance that Japan economics would stand the test of conjuncture degradation. The market changes resulted by the war in Korea has saved a lot of Japan companies. The boom has lasted for a year, and then another decline has come.
The question of vital importance has become a long-term economics development, and its ...Download file to see next pagesRead More
Share:
Tags
Cite this document
(“International Economic Growth (Economics) Essay”, n.d.)
Retrieved from https://studentshare.org/miscellaneous/1500746-international-economic-growth-economics

While each force of globalization is important, the technological revolution has impacted the business models, value creation and differentiation (Spelman, 2010). The cloud computing technologies that have made the popular social networking applications possible are now being applied to development, healthcare, and society. Today mobile telephones are more like powerful computers that take care of many of the societal challenges facing both developed and developing countries (Evans, 2010). In Chile, new software enables weather information to farmers who can now make informed decisions on when and how to sow or harvest the crops. However, the fear or ignorance of cloud computing technology could harm the chances of the SMEs becomi...
7 Pages(1750 words)Coursework

... economy and national culture (Mittelman, 2000). World Economic Forum and Davos 2010 The theme of this annual meeting is to improve the state of the world and rethink, redesign and rebuild. This annual meeting was to rethink the business models, financial innovation and risk management. This rethinking is sought to trigger redesign attempts at the institutions at the national and international levels. The aim of redesign is to close the gaps in governance, prevent systemic failures and restore growth. This effort requires common vision, collaborative innovation and public-private partnership to succeed in the long term. The prerequisite would be to rebuild trust. The meeting focused on the following six areas of enquiry: 1. strengthening...
7 Pages(1750 words)Coursework
sponsored ads
Save Your Time for More Important Things
Let us write or edit the essay on your topic "International Economic Growth (Economics)" with a personal 20% discount.
GRAB THE BEST PAPER

Let us find you another Essay on topic International Economic Growth (Economics) for FREE!