Comments (0)
Add to wishlistDelete from wishlist
Cite this document
Summary
AUSTRIA Due to the sudden elections held on 28 September 2008, a new SPO-OVP imposing coalition was formed under Prime Minister SPO's Werner Faymann at the end of the year. Austrians are planning to send quite a lot of anti-EU members to the new parliament…
Download full paperFile format: .doc, available for editing
HIDE THIS PAPERGRAB THE BEST PAPER91.1% of users find it useful 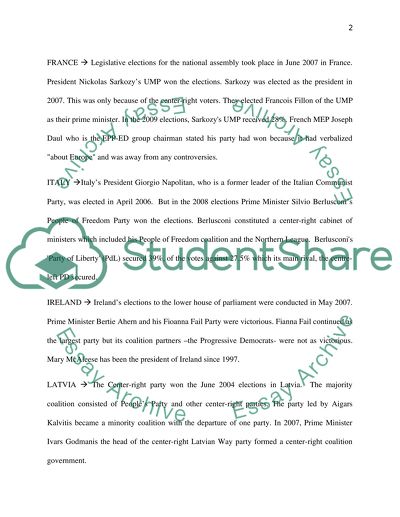 Download file to see previous pages BULGARIA Parliamentary elections of 2007 resulted in the victory for a new center-right party: Citizens for the European Development of Bulgaria (GERB) under Boyko Borisov. Georgi Parvanov has been the president of the country since 2002. The center-right GERB opposition party won 26.2% of the vote and five seats in the 2009 election. They beat the ruling Socialists (18.9%/4 seats).
CZECH REPUBLIC The two round parliamentary elections which were conducted in 2006 was shaded off by a dishonor, resulting in reformation of government in 2007. Mirek Topolanek who leads the Civic democrats formed a new center-right government in January 2007. This government consisted of Topolanek's Civic Union, the Greens, and the Christian Democratic Union-Czechoslovak People's Party. Jan Fisher has been the prime minister since 8 May 2009.
FRANCE Legislative elections for the national assembly took place in June 2007 in France. President Nickolas Sarkozy's UMP won the elections. Sarkozy was elected as the president in 2007. This was only because of the center-right voters. They elected Francois Fillon of the UMP as their prime minister. In the 2009 elections, Sarkozy's UMP received 28%. French MEP Joseph Daul who is theEPP-ED group chairman stated his party had won because it had verbalized "about Europe" andwas away from any controversies.
ITALY Italy's President Giorgio Napolitan, who is a former leader of the Italian Communist Party, was elected in April 2006. But in the 2008 elections Prime Minister Silvio Berlusconi's People of Freedom Party won the elections. Berlusconi constituted a center-right cabinet of ministers which included his People of Freedom coalition and the Northern League. Berlusconi's 'Party of Liberty' (PdL) secured 39%, of the votes against 27.5% which its main rival, the centre-left PD secured.
IRELAND Ireland's elections to the lower house of parliament were conducted in May 2007. Prime Minister Bertie Ahern and his Fioanna Fail Party were victorious. Fianna Fail continued as the largest party but its coalition partners -the Progressive Democrats- were not as victorious. Mary McAleese has been the president of Ireland since 1997.
LATVIA The Center-right party won the June 2004 elections in Latvia. The majority coalition consisted of People's Party and other center-right parties. The party led by Aigars Kalvitis became a minority coalition with the departure of one party. In 2007, Prime Minister Ivars Godmanis the head of the center-right Latvian Way party formed a center-right coalition government.
LITHUANIA The center-left government was replaced by the center-right in the elections conducted in October 2008. The center-right party is headed by prime minister and leader of the Homeland Union Lithuanian Christian Democrats Party Andrius Kubilius. Dalia Grybauskaite is Lithuania's first female president who was elected in May 2009.
POLAND Lech Kaczynki was the elected president in October 2005 elections. But in the Snap elections on October 21 2007 resulted in the victory of the center-right opposition party which is led by Donald Tusk. Tusk became Poland's prime minister in November 2007 and led a coalition government of his civic platform party and the Polish People's Party.
SPAIN Prime Minister Zapatero's Socialists won the Parliamentary elections which ...Download file to see next pagesRead More
Share:
Tags
Cite this document
(“European Parliament Elections Essay Example | Topics and Well Written Essays - 2500 words”, n.d.)
European Parliament Elections Essay Example | Topics and Well Written Essays - 2500 words. Retrieved from https://studentshare.org/miscellaneous/1500690-european-parliament-elections

Like all other world bodies, there was a need to bring all the European nations to a single platform. This was all the more needed because the rulers of the respective nations wanted their own particular identity and this brings us to the question that if they needed such an identity what was the need of having European Union (EU)? They could have easily made a body comprising of two or for that matter three countries and enacted their own policies and gone about it in the long run but bringing all the European nations together to a single platform only means that there was a courteous move behind the very same. There was an understanding that since these nations had so much in common amongst each other, thus there should be an un...
10 Pages(2500 words)Term Paper

The EU makes legislation that has to be implemented by twenty – seven Member States. Despite the fact that ministers of the United Kingdom actively participate in the discussions stage and in decision making, the fact remains that all the Member States collectively arrive at the final decision.
The European Economic Community was founded by the Treaty of Rome on the 25th of March, 1957. Its preamble states that a major goal or the EEC was to abolish international trade restrictions adopting a suitable commercial policy. However, this was never achieved, because, the purpose of forming the EEC was to empower the Member States against its economic rivals who did not belong to the EEC. An extreme example of such protection...
11 Pages(2750 words)Assignment

There was a need for the same as well more so because the rulers of the respective nations wanted their own particular identity and this brings us to the question that if they needed such an identity what was the need of having European Union (EU)? They could have easily made a body comprising of two or for that matter three countries and enacted their own policies and gone about it in the long run but bringing all the European nations together to a single platform only means that there was a courteous move behind the very same. There was an understanding that since these nations had so much in common amongst each other, thus there should be an understanding as concerns to their oneness and unity which could only be achieved throu...
12 Pages(3000 words)Term Paper

The EC community went a step further and created a common currency called the Euro in 1999. Most member states accepted the Euro, with the most notable exception being the United Kingdom which holds in the Pound currency one of the most valued currencies in the world. The SEM framework inspired greater joint laws in order aspects of administrating a region such as common laws in farming and fishery. The evolution of the European Community attracted greater sums of foreign direct investment into the continent. Europe also changed the way its strategic focus in many industrial sectors in the 21st century to compete in the global economy. This report analyzes the European region by dividing the paper into seven major topics: Single E...
11 Pages(2750 words)Assignment

The period of Napoleon, that is 1801-1805, is marked as the formation of the Grande Armee1 and the allied armies of European empires demonstrating warmongering tendencies. It wa5snt just France and Napoleon but also Great Britain, Russia, Austria, and Prussia that were belligerent empires, as is obvious from the outcomes of the Congress of Vienna in 1814-18152. The new geopolitics and resolutions thus resulted in continued till 1848 when revolutions across the continent ended the Vienna arrangement. The...
7 Pages(1750 words)Term Paper

In contrast to other writers of his generation, Tolstoy was connected with noble families of the Russian aristocracy, who had brilliant French pronunciation and manners. At the same time, he was a person full of antagonism. Whe...
8 Pages(2000 words)Term Paper

...Global Employee Information and Consultation: Replicating the European Model INTRODUCTION The only way for the employees and their representatives to reach the level of multinational corporations is to create an effective transnational mechanism that facilitates consultation and information disclosure. The European model (EWC) is an example of an institution that intends to provide employees voice in the transnational arena. The information dissemination and consultation arrangement enable employee representatives to participate in discussing issues that pertains to their employment. However, there is a need to analyze whether EU style of legislating a mechanism shall be effective if replicated globally. The answer in part depends...
9 Pages(2250 words)Coursework
sponsored ads
Save Your Time for More Important Things
Let us write or edit the essay on your topic "European Parliament Elections" with a personal 20% discount.
GRAB THE BEST PAPER

Let us find you another Essay on topic European Parliament Elections for FREE!