Comments (0)
Add to wishlistDelete from wishlist
Cite this document
Summary
The Doha Development Round is the nearly eight year old trade negotiation of the World Trade Organization. These round of talks commenced in November 2001during a ministerial conference of the WTO in Doha, Qatar. Since then, the negotiations have been stalled several times due to difference of opinion of many countries…
Download full paperFile format: .doc, available for editing
HIDE THIS PAPERGRAB THE BEST PAPER97% of users find it useful 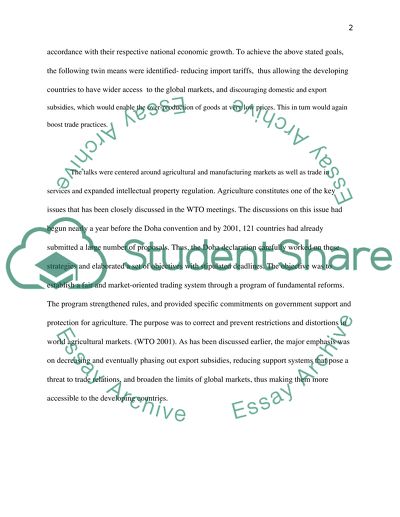 Extract of sample "Doha Development Round"

Download file to see previous pages To add to that, even USA and EU have strategic differences on certain issues. The most recent round, which was held in 2008, broke down after the member countries failed to reach a consensus regarding agriculture import rules (BBC, 2008). Though these were followed by intense negotiations, they failed to break the deadlock.
The World Trade Organization was formed with an aim to supervise and liberalize international trade. The Doha round of talks was a devise formulated to achieve that aim and lower trade barriers around the world, thus facilitating growth in trade globally. Besides that, the talks were also meant to insure that multilateral trading system must benefit the developing countries that constitute over three quarters of WTO members. The Doha declaration declared that the member countries of the WTO should strive to negotiate a policy, wherein the developing countries manage to secure for themselves a share in the growth of world trade in accordance with their respective national economic growth. To achieve the above stated goals, the following twin means were identified- reducing import tariffs, thus allowing the developing countries to have wider access to the global markets, and discouraging domestic and export subsidies, which would enable the over-production of goods at very low prices. This in turn would again boost trade practices.
The talks were centered around...
Thus, the Doha declaration carefully worked on these strategies and elaborated a set of objectives with stipulated deadlines. The objective was to establish a fair and market-oriented trading system through a program of fundamental reforms. The program strengthened rules, and provided specific commitments on government support and protection for agriculture. The purpose was to correct and prevent restrictions and distortions in world agricultural markets. (WTO 2001). As has been discussed earlier, the major emphasis was on decreasing and eventually phasing out export subsidies, reducing support systems that pose a threat to trade relations, and broaden the limits of global markets, thus making them more accessible to the developing countries.
Out of the 132 countries that are a part of the WTO, 103 countries are classified as developing or least developed. In majority of these countries, agriculture is the chief occupation for the masses. Thus, all possible steps were taken to ensure that developing countries benefit from the declaration, especially when it comes to the issue of agriculture. The issue was managed under the following dimensions- market access, domestic supports, export competition, and development issues. At certain places, these counties were also rendered special treatment, to alleviate domestic problems of food scarcity and rural development. Recently, however agriculture( more specifically, agriculture import rules) has become the crux of several deadlocks.

CHECK THESE SAMPLES OF Doha Development Round

When it comes to the cognitive development of children, the name of Piaget is und...
7 Pages(1750 words)Assignment
sponsored ads
Save Your Time for More Important Things
Let us write or edit the essay on your topic "Doha Development Round" with a personal 20% discount.
GRAB THE BEST PAPER

Let us find you another Essay on topic Doha Development Round for FREE!