Comments (0)
Add to wishlistDelete from wishlist
Cite this document
Summary
This report opts to come up with an efficient marketing strategy for the market leader in the casual dining industry, Applebee International, Inc. In order to do so, this report uses strategic marketing tools to assess the external and internal environment of the business organization…
Download full paperFile format: .doc, available for editing
HIDE THIS PAPERGRAB THE BEST PAPER96.9% of users find it useful 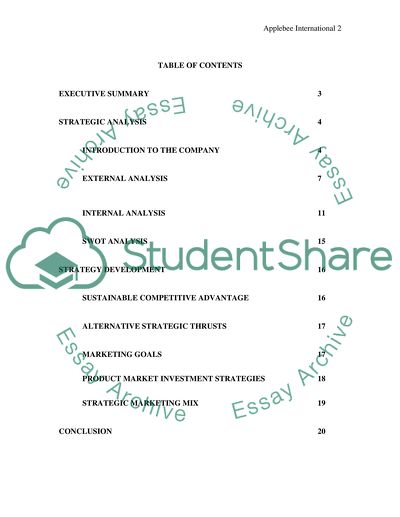 Download file to see previous pages From its humble beginnings in 1980, Applebee International, Inc. has risen to become the largest casual dining restaurant chain in the United States based on size, market share, and revenue. Applebee is founded by Bill and TJ Palmer with their first restaurant TJ Applebee's Rx for Edibles and Elixirs changing the name to Applebee's Neighborhood Grill and Bar in 1986. Two years later, franchisees Abe Gustin and John Hamra bought the rights to the Applebee's concept from W.T. Grace. With the pursuit of its growth strategy, Applebee International is established, growing into 54 restaurants in 1998 when it opened for franchising Today, Applebee operates 1, 900 casual dining restaurants all over the world operating with the commitment of providing "attractive, friendly, neighborhood establishment featuring moderately priced, high-quality food and beverage items, table service and a comfortable atmosphere that speaks to all ages" (Company Overview, 2007).
Applebee's global operation is headquartered in Overland Park, Kansas. The United States is the company's largest market where develops and operates 1,841 restaurants within 49 states and one U.S. territory while it also has 89 restaurants in 16 international counties. Of the 1,900 restaurant chains in the world, 1,409 (74%) are franchised operated leaving only 521 (26%) restaurants in its sole management.
Specializing in casual dining, Applebee restaurants offer lunch and dinner made up of entrees of beef, chicken, pork, seafood and pasta dishes, desserts and appetizers which the company changes from time to time in response to the patrons' tastes and preferences. (Fast fact, 2007). The price of an average meal is $11. Aside from providing dine-in services, it also introduces Carside To Go which allows customers to consume their orders outside the store premises. Recognizing the clamor for a healthier lifestyle, it has teamed up with Weight Watchers International in offering the Weight Watchers selections. Geographically, it has the small market segment in rural areas under 25,000 in population while cornering larger market segments in the cities. (Horovitz, 2003).
Under the leadership of Lloyd L. Hill, who became chief executive officer in 1998, the company has posted positive net earnings, despite a fluctuating growth trend in total operating revenues in the past ten years (Hoovers, 2007). The company's operations are grouped into three business divisions:
1. Company restaurant sales which is comprised of the sales of food and beverages;
2. Franchise royalties and fees from its franchisees (franchise royalty are generally 4% of the franchise restaurant's monthly gross sales while franchise fees are typically ...Download file to see next pagesRead More
Share:
Tags
Cite this document
(“Strategic Marketing Plan Case Study Example | Topics and Well Written Essays - 4750 words”, n.d.)
Strategic Marketing Plan Case Study Example | Topics and Well Written Essays - 4750 words. Retrieved from https://studentshare.org/miscellaneous/1500396-strategic-marketing-plan-case-study

To cash in on the brand image achieved through the success of the ‘Bliss’ range of a hair care products, by positioning the new product range as affordable while being gentle and versatile and target the already favorable market segment of the ‘Bliss’ range.
MD inc. has already been in the beauty and personal care sector and has a successful product range named ‘Bliss’ under its kitty. The new market that is the Electrical hair care appliances market is potentially a high growth area. Though the current growth rate is slow, the future trends indicate that with appropriate marketing strategy and positioning, the market and the companies in this sector can grow at a higher rate.
Demograp...
6 Pages(1500 words)Case Study
sponsored ads
Save Your Time for More Important Things
Let us write or edit the case study on your topic "Strategic Marketing Plan Case Study" with a personal 20% discount.
GRAB THE BEST PAPER

Let us find you another Case Study on topic Strategic Marketing Plan Case Study for FREE!