Comments (0)
Add to wishlistDelete from wishlist
Cite this document
Summary
Consensus on appropriation (COA) among team members is one of the important factors which relates to the development of the effective collaboration among team members, as they have same norms working together in a team work (Salisbury, Abhijit and Wynne, 1996…
Download full paperFile format: .doc, available for editing
HIDE THIS PAPERGRAB THE BEST PAPER99% of users find it useful 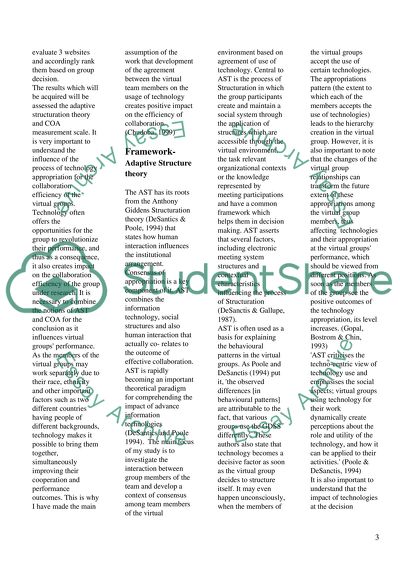 Download file to see previous pages The frame work used for this study was Adaptive Structuration Theory (AST) which is based on Anthony Giddens Structuration theory (DeSanctis & Poole, 1994). From the study, we can conclude that the results acquired are controversial and do not present the complete picture of the research on consensus of appropriation due to various limitations.
In the past information technology primarily supported business functions by just improving the efficiency. Advanced information technologies (AIT) are designed to support coordination along with interpersonal communication which epitomize to a new class of information technologies ( DeSanctis and Poole 1994). Adopting the Adaptive Structuration Theory Framework (AST) emphasizes how Advance Information Technology is used to mediate any influence on the effective collaboration in a GDSS system. The effective use of Group Support systems (GSS) to aid work in small groups has been an important topic of research since the mid 1980s as the major focus was on the technology rather than the factors which influence the outcome of effective collaboration in GSS. GDSS aims to improve the process of decision making by removing communication barriers. The factors influencing group problem solving include: reluctance to participate, inconsistent views about the problem's components and their relationships, undue dominance by one individual in the group, tendency towards premature convergence, unproductive avoidance or escalation of conflict, and issues of leadership (DeSanctis, 1996).It is interesting to look at the impact of developing consensus of Appropriation (COA) among team members of the virtual environment and whether it has a major influence on the outcome of effective collaboration.
The impact of technology appropriation and consensus development on the collaboration effectiveness of the virtual groups is the topic which has certain perspectives for the further research, and the basis for such assumption lies in the fact that the rates of technological development at present are the highest, and their impact on the human life and on the decision outcomes as a part of the virtual groups' performance should not be underestimated. This is why I decided to make this topic the subject of my research, using the Adaptive Structuration Theory and literary resources as the basis for the analysis and discussion of the results acquired.

Background
The data set used for analysis was taken from the second semester of 2003 which was a joint effort between the first year students at Uppsala University at Sweden and the third year students of Auckland University of Technology (AUT) in New Zealand. The collaborative database was developed using Lotus Notes at the school of computing and Information Sciences, AUT. The online collaboration consists of two phases. The first phase is Icebreaking activity which actually allows different users to introduce themselves and get familiar with the database in order to explore different features of it. . At the end of the phase one, the user evaluates and comments on the icebreaking task. The next phase is the group decision phase in which the group members had to evaluate 3 websites and accordingly rank them based on group ...Download file to see next pagesRead More
Share:
Tags
Cite this document
(“Does developing consensus of Appropriation (COA) among team members of Essay”, n.d.)
Does developing consensus of Appropriation (COA) among team members of Essay. Retrieved from https://studentshare.org/miscellaneous/1500336-does-developing-consensus-of-appropriation-coa-among-team-members-of-the-virtual-environment-have-a-major-influence-on-the-outcome-of-effective-collaboration

“Does Developing Consensus of Appropriation (COA) Among Team Members of Essay”, n.d. https://studentshare.org/miscellaneous/1500336-does-developing-consensus-of-appropriation-coa-among-team-members-of-the-virtual-environment-have-a-major-influence-on-the-outcome-of-effective-collaboration.
Comments (0)
Click to create a comment or rate a document

...The term HYBRID warfare is increasingly used to describe current and future conflict; what is it and what challenges does it present? The end of theCold War and the events of 9/11 have provided a catalyst for unprecedented challenges to the international order and national security policy. Arguably the most important challenge has been the appropriate and most efficacious method to combat a transient and intangible enemy, which transcends borders and the conventional notion of an organised army that “yet has shown a remarkable resilience against traditional military firepower”1. Moreover, Mahmood’s observations highlight the changing nature of conflict and the fact that the contemporary international framework has removed pre-existing...
7 Pages(1750 words)Article
sponsored ads
Save Your Time for More Important Things
Let us write or edit the essay on your topic "Does developing consensus of Appropriation (COA) among team members of the virtual environment have a major influence on the outcome of effective collaboration" with a personal 20% discount.
GRAB THE BEST PAPER

Let us find you another Essay on topic Does developing consensus of Appropriation (COA) among team members of the virtual environment have a major influence on the outcome of effective collaboration for FREE!