Comments (0)
Add to wishlistDelete from wishlist
Cite this document
Summary
Amnesty has published an article under the title: "Tibet at risk of torture" on march 27 2008. It shows the recent events in Tibet, a country that is occupied by China for more then 50 years now. …
Download full paperFile format: .doc, available for editing
HIDE THIS PAPERGRAB THE BEST PAPER92.1% of users find it useful 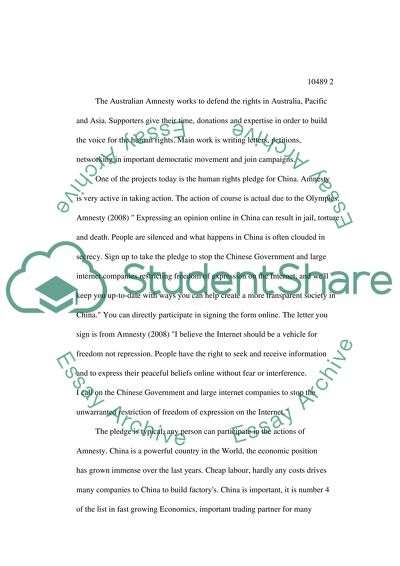 Download file to see previous pages Despite all efforts from the Dalai Lama, the Olympics 2008 in Being are the event that draws finally the attention to the problems of the occupation. The whole world is protesting right right now. And what Amnesty shows us explains why. Amnesty (2008): "According to information published by the Tibetan Center on Human Rights and Democracy, 15 Tibetan monks were detained on 10 March for staging a peaceful demonstration in Barkhor, Lhasa, the capital of Tibetan Autonomous Region in China. There is no information of their current whereabouts or of any charges brought against them. They are at high risk of torture and other ill- treatment." Besides this significant and important action there is also the important issue on the Human Rights situation in China. Amnesty (2008): " Expressing an opinion online in China can result in jail, torture and death. People are silenced and what happens in China is often clouded in secrecy. Sign up to take the pledge to stop the Chinese Government and large internet companies restricting freedom of expression on the Internet, and we'll keep you up-to-date with ways you can help create a more transparent society in China." You can directly participate in signing the form online....
and to express their peaceful beliefs online without fear or interference.
I call on the Chinese Government and large internet companies to stop the
unwarranted restriction of freedom of expression on the Internet."
The pledge is typical, any person can participate in the actions of
Amnesty. China is a powerful country in the World, the economic position
has grown immense over the last years. Cheap labour, hardly any costs drives
many companies to China to build factory's. China is important, it is number 4
of the list in fast growing Economics, important trading partner for many
countries in the world including Australia. However in the part of human rights
nothing changed at all. Till this very moment people still die or are prisonised.
10489 3
Shocking to read is this part Amnesty (2008) "By allowing Beijing to host the
Games you will help in the development of human rights" Liu Jingmin, Vice-
President of Beijing Olympic Bid Committee, April 2001 . What can be said
after reading this Dit we miss something in the last couple of years or is
China changing here and there Many questions we may ask ourselves. Amnesty
remains however optimistic as we can read. Amnesty (2008) "The 2008
Beijing Olympics provides us with an unprecedented opportunity to help create
a more transparent society in China. Freedom of expression is a universal human
right, and Amnesty International believes the Games can be used as a positive
step towards creating a society in China that upholds basic human rights.
In Australia, our campaign will challenge the Chinese system of internet
repression. We want to see freedom of expression in China. We would like
citizens everywhere to have the same access to the ...Download file to see next pagesRead More
Share:
Tags
Cite this document
(“Amnesty International Australia Essay Example | Topics and Well Written Essays - 1000 words”, n.d.)
Amnesty International Australia Essay Example | Topics and Well Written Essays - 1000 words. Retrieved from https://studentshare.org/miscellaneous/1500279-amnesty-international-australia

...﻿“AMNESTY” By Nadine Gordimer A Reflective Analysis Introduction Nadine Gordimer’s Amnesty describes how one man’s life and decisions changes the whole situation of his family and the life of all the others who are dear to his life. In this story, a description on how human oppression directly affects the being of an individual and how it retaliates to affect the life of that man is clearly depicted. Understandably, through the description of the connection and relationship between two people [a man and a woman who were never named in the story], an understanding on how particular situations in the society changes each person becomes a clarified issue. The Characters Gordimer primarily used the irony of emotions to present her thoughts...
2 Pages(500 words)Book Report/Review

... and patience from all of us, and when China shows the World it is willing to change the situation in the Country then we should not only respect that but also embrace that. So indeed I would participate in any petition that is needed to keep the attention and will spread the word. Fact is that Amnesty gives you a change to participate directly online. Let hope that by participating and taking actions, would influence the government's policy toward positive changes. References Amnesty International Australia. Tibetans at risk of torture, viewed May 1 2008, . Amnesty International Australia. Promoting and defending human rights viewed May 2 2008, < http://action.amnesty.org.au/centre/action/4917/ >...
5 Pages(1250 words)Case Study

Marsupial species including diprotodons and a giant reptile, the Megalania, a goanna species measuring up to 7 meters in length, disappeared within a relatively short time. Australia suffered greater extinction rates than other continents with an estimate of over 85% of all vertebrates over a bodyweight of 40 kilograms becoming extinct (Roberts et al, 2001).
Australian megafauna during the Pleistocene included marsupial mammals, birds, and reptiles, with marsupial herbivores weighing up to 1,500 kilograms. Kangaroo species reached weights of up to 1,000 kilograms and the largest bird, Geyornis newton, weighed an estimated 100 kg (Hiscock, 2008).
The tendency to evolve into larger species (gigantism) is a product of natur...

A Festival for Amnesty International

...﻿Amnesty International is an organization that supports the human rights of individuals who are persecuted around the world. At a stage in history where the economy has left so many people desperate and focused on their own needs, the spark of compassion that supports these kinds of organizations is narrowing and dimming. Public experiences often help to galvanize the public towards revitalization where the causes of the world are concerned. It is the intention of the creators of this event to spark local interest in the London area about the issues that are supported by Amnesty International, while providing local and celebrity performers the opportunity to support the cause in a two day festival event. I hope you will take a moment...
19 Pages(4750 words)Speech or Presentation
sponsored ads
Save Your Time for More Important Things
Let us write or edit the essay on your topic "Amnesty International Australia" with a personal 20% discount.
GRAB THE BEST PAPER

Let us find you another Essay on topic Amnesty International Australia for FREE!